The ‘Anaconda’ raptress denies she ever said that she refused to get the vaccines, blasting several news outlets for lying about her reason for not attending the Met Gala.

AceShowbiz –Nicki Minaj is not an anti-vaxxer, so she declared. The rapper has clarified her tweet after it was previously reported that she would not be able to attend the Met Gala because she tested positive for COVID-19 and she refused to get the vaccines.

Slamming the misinterpretation of her tweet, the Trinidadian-born returned to Twitter on late Monday, September 13 to deny that she ever said she refused to get the vaccines. “They want you to get vaccinated for the Met,” she wrote, adding that she’ll get vaccinated after doing enough research. “if I get vaccinated it won’t for [sic] the Met. It’ll be once I feel I’ve done enough research. I’m working on that now.”

She went on sharing a message to her fans to stay safe, “In the meantime my loves, be safe. Wear the mask with 2 strings that grips your head & face, Not that loose one.”

Nicki later took aim at several news outlets for the misreporting. “Pls show me where I said I’m ‘worried about’ anything. Yes. I’m glad you guys get to see how the media REALLY works. I’ll have them contacted along with others,” she wrote in a separate tweet.

The “Starships” raptress later posted screenshots of several headlines about her supposed vaccine stance, claiming, “3 lies in a row from huge news platforms. I cited my young child as why I didn’t want to travel. But notice how NONE of them mentioned that? Ask yourself why that was.” On Variety’s reporting, she commented, “Never said this. Glad all my tweets were left up. On it.” 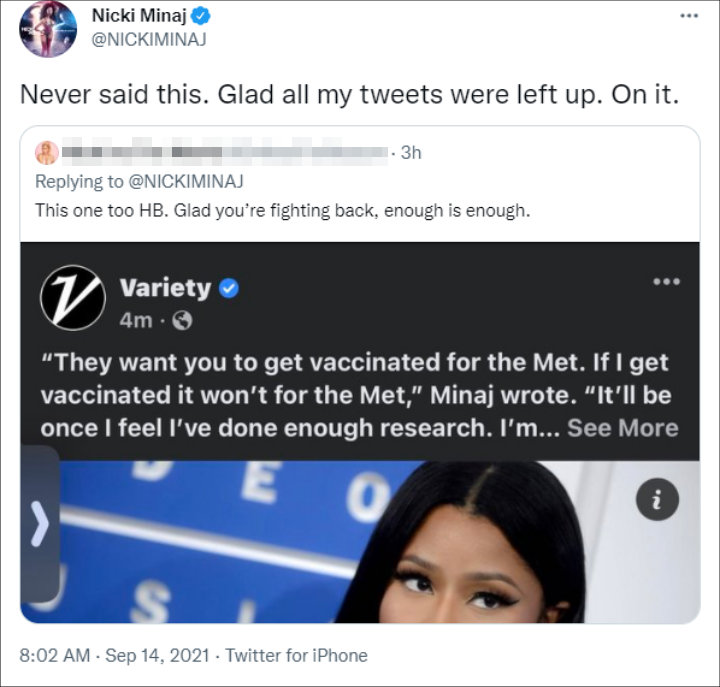 Nicki also clapped back at TV host Joy Ann Reid, who criticized her for her vaccine stance. The MSNBC corresponded said to Nicki, “For you to use your platform to encourage our community to not protect themselves and save their lives… As a fan, I am so sad that you did that.”

The Harajuku Barbie then responded, “This is what happens when you’re so thirsty to down another black woman (by the request of the white man), that you didn’t bother to read all my tweets. ‘My God SISTER do better’ imagine getting ur dumb ass on tv a min after a tweet to spread a false narrative about a black woman.”

“Why would they bother to read when the lie is so juicy & provocative & got her dumb a** on tv. They got someone with black skin for a reason. They always use us against us,” she added in another tweet.

Nicki also called Joy “a lying homophobic coon” for her own past controversies. “A lying homophobic coon,” the mother of one remarked. “I guess I can join in the reindeer games too right? Ppl can go on tv & lie on me, I can report on them, too right? Smiling face. Doesn’t have to be truths. It can be half truths. Uncle Tomiana asked who on earth would trust the US FDA guys…” 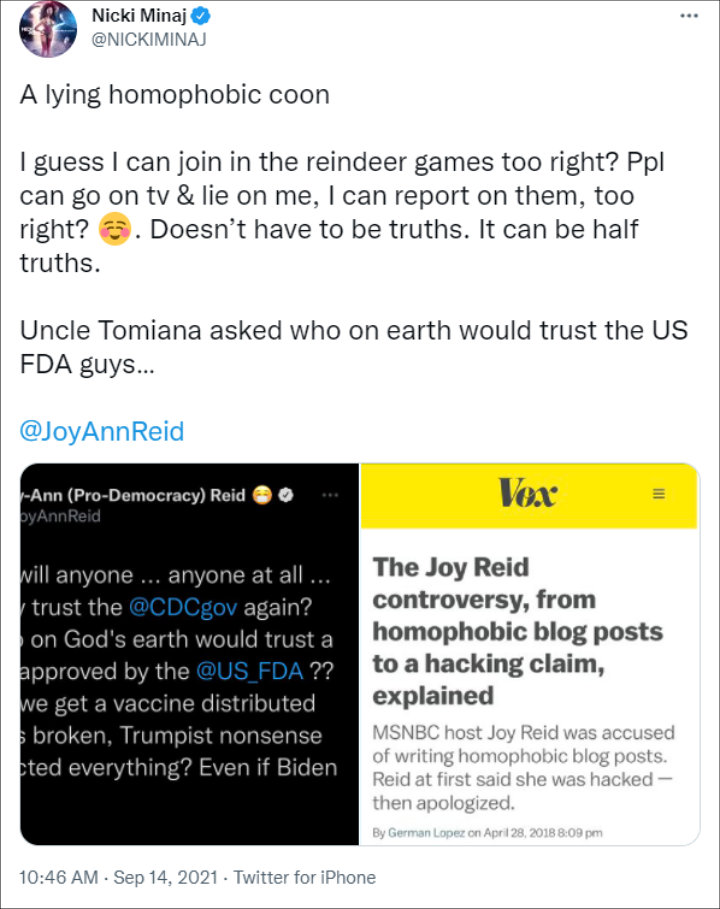 Nicki Minaj clapped back at Joy Ann Reid for criticizing her vaccine stance.

Nicki previously revealed the reason why she canceled her MTV VMAs performance and her appearance at the Met Gala was because she tested positive for coronavirus. “[I] was prepping for vmas then i shot a video & guess who got COVID?” she tweeted. “Do u know what it is not to be able to kiss or hold your tiny baby for over a week? A baby who is only used to his mama?”

She later seemed to hint at her skepticism about the vaccines, adding, “Get vaccinated? Drake had just told me he got covid w| [with] THE VACCINE tho [sic].” However, she then asked followers to suggest which of the different COVID vaccinations she should get. “Which vaccine would you recommend? It’s #QueenRadio time. Talk to me,” she tweeted.