They’ve officially been an item for four whole weeks, and Noah Beck’s one-month anniversary post for Dixie D’Amelio is majorly sweet. On Oct. 26, the influencer took to his Instagram Story to share a selfie of him and D’Amelio rocking masks in a car. He wrote, “happy 1 month bub.. i love you<3 @dixiedamelio #doah"

Beck went ahead and publicly dropped the L-bomb. D’Amelio had revealed she loves Beck earlier that day, so it seems like the couple is on the same page. Her confession came during the Oct. 26 episode of her YouTube talk show, The Dixie D’Amelio Show, during which she interviewed Jaden Hossler.

Toward the end of the interview, D’Amelio spiced things up and gave Hossler permission to ask her some questions. He started things off bold. “Now onto who she loves, Noah!” he began.

D’Amelio immediately turned red and started giggling so Hossler pressed on, “Is that something that we can say? That you love Noah?”

Hossler was just as shocked as the rest of her fans, asking, “Wait, actually? Are you for real?”

“Have you said that anywhere else?” Hossler asked.

Oct. 26, 2020. Mark it on your calendars, people. The day D’Amelio and Beck first publicly professed their love for one another. 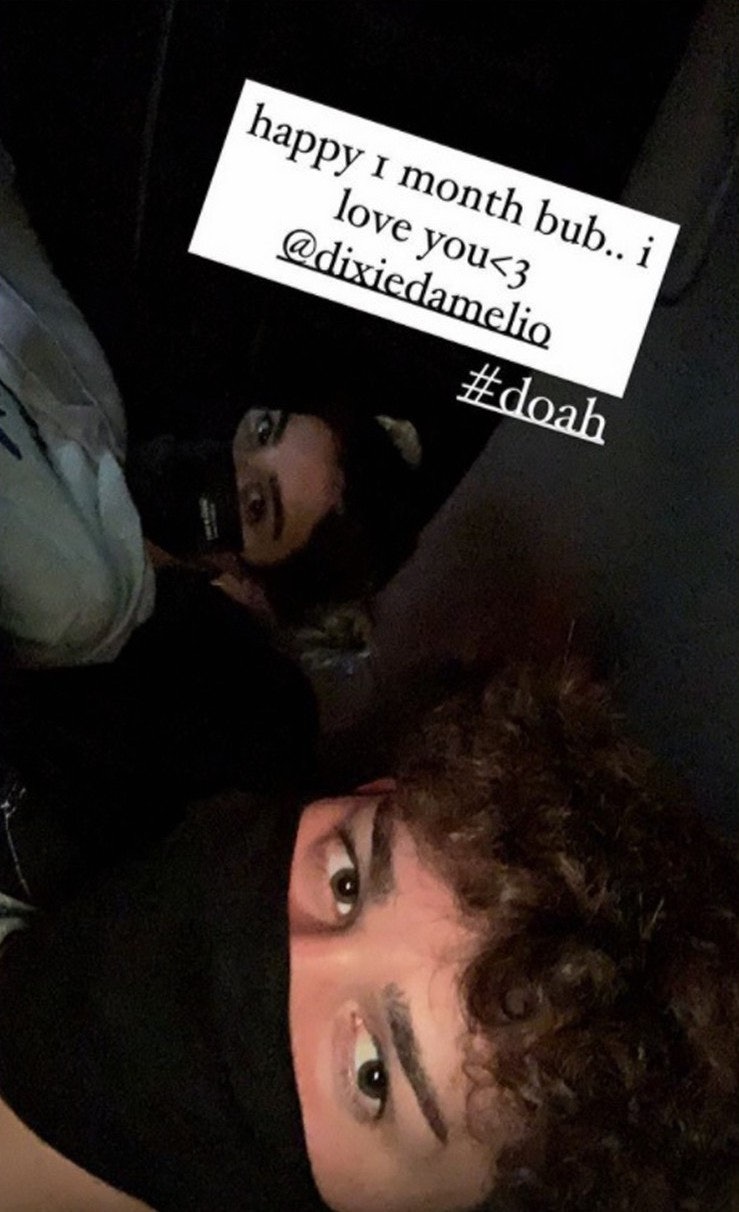 Hossler seems to be really into the union. "That’s really actually pretty cute," he noted after D’Amelio admitted she loves Beck. "That’s kind of cute."

"I remember when I first, like, met Noah," he continued. "I really expected him to be a douchebag. I guess that’s how everyone sees us, too. Like, they just see us and they’re like, ‘Oh, they’re gonna be the worst.’ But he was so nice and I was like, ‘Oh my gosh. He’s so nice.’"

Then, Hossler asked D’Amelio if Beck is really that nice to her "all the time," to which she jokingly responded, "Yes… He’s always that nice and it’s so annoying."

After weeks of rumors, D’Amelio and Beck finally confirmed they’re in a relationship on Oct. 6. The confirmation took place during an appearance on Thomas Petrou’s Instagram channel in a video titled, I Filled Dixie’s Room With Pictures Of Noah! In addition to legit filling D’Amelio’s room with pictures of Beck, Petrou played a video for the couple that featured Beck seemingly confirming they were dating.

“I am dating Dixie D’Amelio," Beck said in the video played by Petrou. "Dixie‘s amazing, she’s an awesome girl. It’s been really fun and so I’m excited for the future with her." D’Amelio reacted to the video by telling Petrou, “OK, we weren’t dating when that video was made, but we are dating.” Just like that, their relationship was official.

And now they love each other! Cuuuute.