Get all the latest news on coronavirus and more delivered daily to your inbox.  Sign up here.

NEW YORK  — Liberty University has pushed for criminal trespassing charges against two journalists who pursued stories about why the evangelical college in Virginia has remained partially open during the coronavirus outbreak.

The college, in Lynchburg, Virginia, is led by Jerry Falwell Jr., a supporter of President Donald Trump who has suggested coverage of the epidemic was overblown. Falwell said the university is conducting classes online and obeying social distancing directives.

But he said he has kept the campus open for international students and those with nowhere else to go. On Thursday, there were about 1,000 students living on campus, roughly one-eighth of its normal residential population.

After stories were written saying Liberty's decision caused concerns in the community, the university pursued charges against Alec MacGillis, a reporter for ProPublica, and Julia Rendleman, a photographer who illustrated a March 29 story in The New York Times.

Virginia Magistrate Kang Lee signed arrest warrants for Class 1 Misdemeanors against the two journalists, punishable by up to a year in jail. It's up to Lynchburg Commonwealth’s Attorney Bethany Harrison to decide whether to prosecute, and she said Thursday she hasn't seen any details on the case.

Liberty's security forces investigated the journalists following publication of their articles, collecting witness accounts that they were on campus without permission, Falwell said. 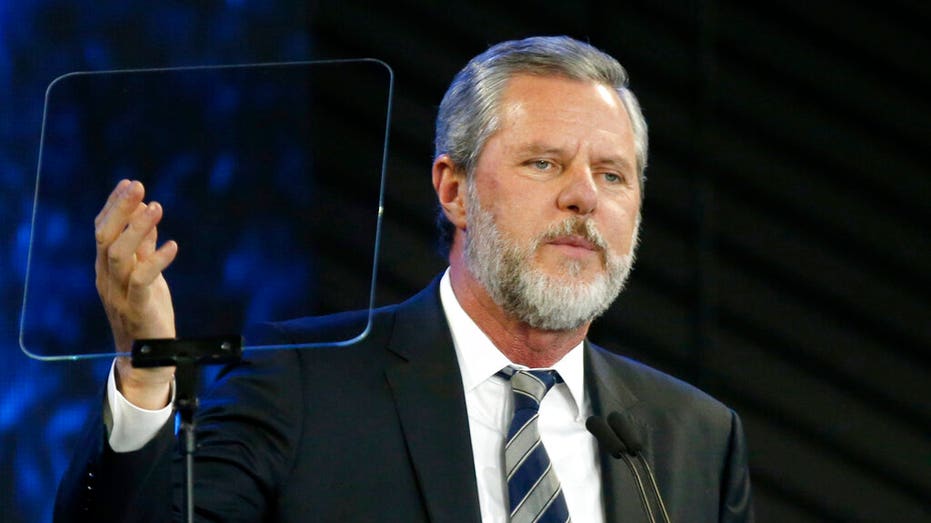 FILE – In this Nov. 28, 2018, file photo, Jerry Falwell Jr. speaks before a convocation at Liberty University in Lynchburg, Va. The university, led by Falwell, is pushing for criminal trespassing charges to be lodged against two journalists who pursu

He said it was a safety issue not to let outsiders in at a time of a global pandemic.

“When people are coming from known hot spots, we feel we owe it to our students and our parents not to let that happen,” Falwell said in an interview on Thursday. “The only way to send the message is to let them know they will be prosecuted.”

AMAZON TAKES ON CORONAVIRUS BY DEVELOPING TESTS FOR WIDE USE

What's really important is writing about a decision that goes against safety guidelines and puts people's health at risk, said Richard Tofel, president of ProPublica. MacGillis' article, headlined “What's it Like on One of the Only University Campuses Still Open in the U.S.?” was published on March 26.

“Bringing an action on trespassing charges seems something beside the point,” Tofel said.

The only reason that trespassing accusations weren't made against Elizabeth Williamson, the Times reporter who wrote about Liberty on March 29, was because eyewitnesses could not be found, Falwell said. The Times story was headlined, “Liberty University Brings Back its Students, and Coronavirus Fears, Too.”

The Times said its freelance photographer was doing the routine job of taking a picture of someone interviewed for the news story.

“We are disappointed that Liberty University would decide to make that into a criminal case and go after a freelance journalist because its officials were unhappy with press coverage of the university's decision to convene classes in the midst of the pandemic,” spokeswoman Eileen Murphy said.

In the midst of reporting its own story about Liberty's decision on March 24, an Associated Press photographer was approached by a campus security officer, asked to leave and to delete all of the images he had taken at Liberty.

After consulting with a supervisor, the photographer deleted the images — a decision the news organization said was wrong in retrospect.

“We don't delete photos or any other material at the request of an individual law enforcement officer,” said Sally Buzbee, the AP's executive editor and senior vice president. “We try to fight such orders legally.”

Liberty is particularly upset at the Times, disputing the newspaper's contention that nearly a dozen Liberty students were sick with symptoms that suggested COVID-19. The university said only one student has tested positive — someone who did not live on campus and was last on campus two weeks before being tested.

Liberty has called for a retraction and threatened legal action.

“We're confident in the accuracy of our reporting,” she said.

Falwell has also questioned whether Liberty is being picked on for political reasons, noting that it's not the only university in the country to have the same limited opening.

To that end, the university is planning to run newspaper advertisements in some southern cities where many of its students are from that draws comparisons to some other universities, he said.

The upcoming ad says that “Liberty's response to COVID-19 puts us in pretty good company, despite what you might conclude from media accounts.”