Rihanna was photographed in a glamorous ensemble while leaving a hotel in downtown Los Angeles, after reportedly emerging from an ’11-hour’ music video shoot!

Could this be a sign that Rihanna will be dropping a new song? It was certainly a promising sight after Rihanna, 32, was photographed leaving a hotel in downtown Los Angeles on Thursday night, Oct. 29. The Fenty founder and songstress was reportedly shooting a music video that entailed an 11-hour shoot, according to the BACKGRID photo agency. 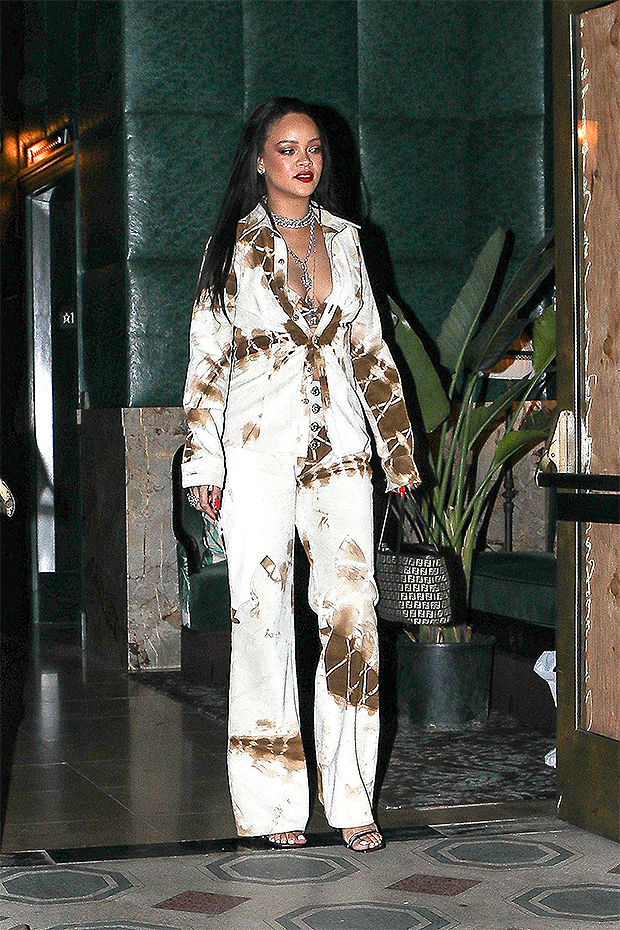 Rihanna was all glammed up, too, as she was pictured rocking a two-piece set in a trendy brown tie-dye print while sporting a heavy layering of silver necklaces and a Fendi bag. A bold red lip topped off the ensemble, and Rihanna looked like she meant business (whatever her business was that day).

This sighting comes after years of anxious waiting for Rihanna’s ninth studio album. The multi-hyphenate last released an album, Anti, in 2016, and has since shifted focus to her growing retail empire that entails her lingerie brand Savage X Fenty, Fenty Beauty, her Fenty fashion label and RiRi’s newest addition to her entrepreneur portfolio — Fenty Skin — in July of 2020.

Amid all her many business endeavors, though, Rihanna revealed that she was “back” in the studio in Feb. 2020. She also shared a photo of a digital screen that read “The Neptunes,” which is the name for the music production duo Pharrell Williams and Chad Hugo.

A few months later, Rihanna explained why she’s taking her time with this album despite fans’ pleas for new music. “I am always working on music. I am always working on music and when I am ready to put it out in the way that I feel fit, it’s gonna come out. And you’re not going to be disappointed when it happens. It’s going to be worth it,” the “Rude Boy” singer told Entertainment Tonight in an interview in July. She added, “I’m not just gonna put it out just because people are waiting. It’s taken this long, I’m gonna make it worth it.”