Home » Celebrities » ‘Saturday Night Live’ is headed back to Studio 8H for season 46. Here’s what you need to know.

‘Saturday Night Live’ is headed back to Studio 8H for season 46. Here’s what you need to know. 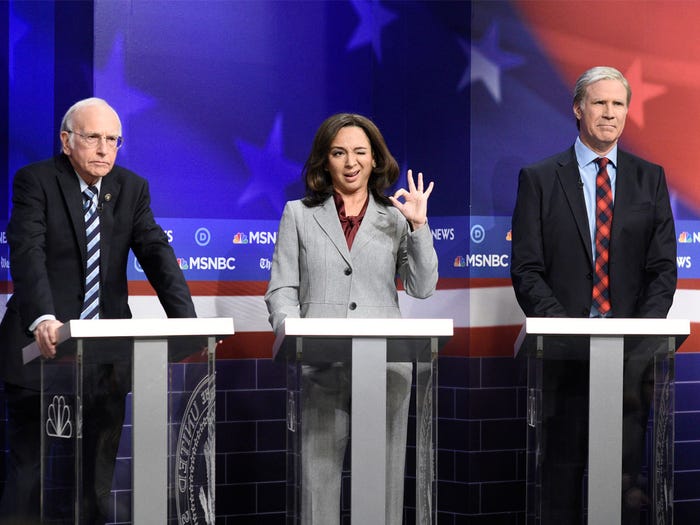 After season 45 of "Saturday Night Live" was interrupted by the coronavirus pandemic in mid-March, the cast and crew scattered across the country to quarantine.

Instead of appearing together on the iconic Studio 8H stage together, they closed out the season by taping three episodes from home.

And while watching Pete Davidson lounge on his mother's couch in Staten Island and Bowen Yang play an overzealous SoulCycle instructor from his apartment was welcomed entertainment in the first several months of the pandemic, the show's return to the studio for season 46 is highly anticipated.

"SNL" cast member Kyle Mooney said the remote episodes were a "cool change of pace" during an interview with Collider, admitting that it wasn't quite the same as filming the show in the studio.

"You can't take anything away from collaborating and just being near these people who inspire you and inspire fun ideas," he said.

Head writer Colin Jost echoed Mooney's sentiments about returning to the studio during an episode of "The Howard Stern Show" in July, saying that he'd discussed the matter with his cowriter, Michael Che.

"The COVID stuff has really affected how I feel about it because, you know, being away from people who make you laugh at work in that way for this long, really makes you appreciative of not only the job, but of the routine of being at work," he said.

With the September 10th announcement that "SNL" would, in fact, air live from its longtime home in Rockefeller Center, Lorne Michaels, the show's creator and executive producer, confirmed that there would be safety regulations in place to prevent the spread of COVID-19.

And though the backdrop and cast may strike you as familiar this season, there will be several changes on the Studio 8H stage.

From the three new featured players joining the cast to the comedian portraying Joe Biden this election season, here's what you need to know ahead of the season 46 premiere.

Following a seven-month hiatus from the studio, the show will resume filming live episodes at Rockefeller Center on October 3, NBC announced on September 10.

Michaels confirmed that there will be guest hosts during an interview with Vulture, explaining that they will rehearse with the cast the week leading up to the show per usual.

He said the team will work to keep things "smaller" and "tighter" as a safety precaution, however.

On September 24, "SNL" announced that Chris Rock is set to host the first show on October 3, and Megan Thee Stallion will be the musical guest.

There will be a live studio audience

Michaels and his team have been working with Gov. Andrew Cuomo to have a live audience while following COVID-19 guidelines, he told Vulture.

"We've been getting support from the governor's office, which is important because the audience is a huge part of it," the screenwriter said.

While some late-night shows have returned to empty studios, an audience is an essential tool that allows the "SNL" comedians to try out material before the live taping, he explained.

Because, before the live taping at 11:30 p.m., the cast and crew run through a full dress rehearsal at 8 p.m. to decide which segments to cut or amend, and choices are sometimes based on the audience's reaction.

"We need the audience, obviously. With comedy, when you don't hear the response, it's just different. With the kind of comedy we do, which quite often is broad, timing gets thrown off without an audience," Michaels said.

He didn't specify exactly what the makeup of the audience will look like but said his team was having conversations about the "sheer physical challenge of what we can do within protocols," like the number of people in the control room and the space between the band members.

The entire cast signed on for season 46

The entire season 45 ensemble will return to the studio for season 46, NBC confirmed. It's the first time in 13 years that there's no cast turnover between seasons, The Hollywood Reporter wrote.

Because of several of the cast members' outside projects — like Kate McKinnon's shows "Dropout" and "Joe Exotic" and Kenan Thompson and Chris Redd's comedy series — fans worried that the "SNL" comedians wouldn't return.

However, Michaels told Vulture that they plan to work around the casts' other obligations and may even turn to green screens if needed.

"People will stay involved, but they may not physically be in the studio," he said.

Nwodim was promoted from featured player to repertory player ahead of the show's 46th season, Vulture reported.

The actress first joined the comedy sketch series for season 44 in 2018.

Before making her mark in roles like L'Evanka Trump in a political satire skit called "Them Trumps," Nwodim was a cast member at Upright Citizens Brigade and recognized as one of the new faces at the Just for Laughs festival in 2016.

There are three newcomers to the cast

Michaels announced that three new featured players will join the cast of "SNL" for season 46 during his interview with Vulture, meaning there will be a total of 20 cast members.

The newcomers include Lauren Holt, an actress and Upright Citizens Brigade performer, Punkie Johnson, a Los Angeles-based standup comic, and Andrew Dismukes, a standup comic and writer for "SNL."

"All three of [the new cast members] are people with original voices and talent," Michaels told Vulture. "They're bringing something that we now don't have."

Anna Drezen has been added as a new head writer

She previously served as a writer and writing supervisor on the show, working on skits like "Film Panel" and "Nephew Pageant."

Maya Rudolph and Alec Baldwin will return for election coverage

As soon as Biden announced that Sen. Kamala Harris was his running mate for the 2020 presidential election, the internet celebrated the potential reprisal of Rudolph's "SNL" role as the Democratic vice presidential nominee.

The former "SNL" cast member, who earned an Emmy nomination for her portrayal of Harris, continued, "I love going to the show. Any excuse I can get, I love. I just didn't really anticipate traveling during a pandemic, but if there's anyone that can work it out I'm sure Lorne has some sort of invisible helicopter that can get me there."

During his interview with Vulture, Michaels confirmed that Rudolph would continue her role as Harris.

He also said that Alec Baldwin was all set to return as President Donald Trump, a role he's done around "25 or 30 times."

To Michaels, these aren't "celebrity cameos." Instead, he said he prefers to think of them as "part of an extended group."

Carrey will take on the role of Biden, the Democratic presidential nominee, on season 46 of "SNL," Michaels revealed during his interview with Vulture.

"Jim Carrey is going to do Biden," he said. "There was some interest on his part. And then we responded, obviously, positively. But it came down to discussions about what the take was."

Michaels said that he personally discussed the role with Carrey, as did Jost.

"He will give the part energy and strength," Michaels said, adding, "Hopefully it's funny."

In previous seasons of the show, Woody Harrelson and Jason Sudeikis portrayed the politician. Because of the pandemic, there were multiple things to consider before casting the role on season 46.

"Part of it also is whoever does it has to basically relocate to New York because of quarantine. So, there were a lot of factors involved in that. But I'm thrilled Jim's doing it," Michaels said.

Because of the grueling schedule leading up to the show's live weekly taping, it's customary for the cast and crew to take breaks every couple of weeks to re-energize.

Michaels said that this year, the show would air for five weeks straight, a historically long stretch for "SNL."

"I made the decision early on, or at least about a month ago, that we would do something we hadn't done before, which was five shows in a row," he told Vulture.

Between the four presidential debates, Halloween, and the election, there isn't a free weekend to take off. If the election doesn't wrap up under a normal timeline due to the pandemic, the show could stretch into six or seven weeks, Michael said.

"Fatigue has been part of it, so we're trying to make sure that everyone is safe and protected and looked after," he said.

"The show will be compromised on some levels of production, but it will be recognizable as the show you've seen all these years."