While the ‘Wolves’ singer opts for a conservative look in a scarlet dress with puffy sleeves, the ‘Hustlers’ star bares cleavage in her white jumpsuit with silver sequins

AceShowbiz –Selena Gomez and Jennifer Lopez led the glamor at the Global Citizen: Vax Live concert which was pre-taped on Sunday, May 2 in Inglewood, California. Gracing the red carpet of the charity event, both stars stunned in their contrasting looks.

The 28-year-old actress/singer opted for a more conservative look in a long-sleeve scarlet dress that featured puffy sleeves and was ribbed around her midriff. She teamed her short dress with thigh-high black patent leather boots while putting on minimal accessories, which included a silver choker and several rings.

Her platinum blonde hair was parted in the middle and was styled in a sleek updo, while she wore bronze eyeshadow to highlight her fair complexion. She also put on peach lipstick, while rocking white-and-black polish on her nails. 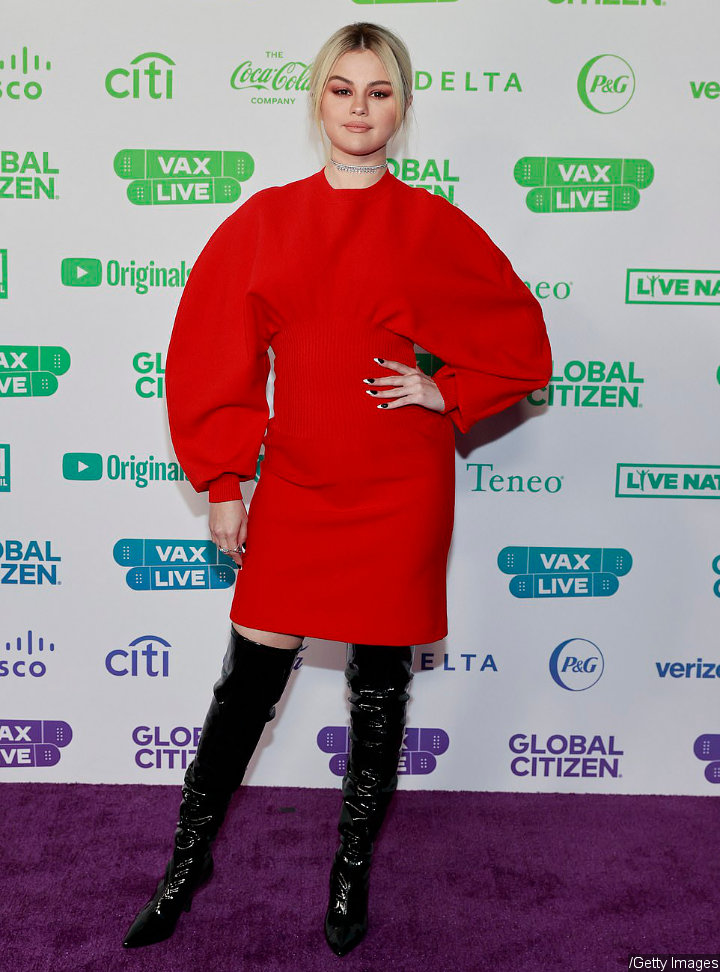 J.Lo, on the other hand, put on a busty display in a cleavage-baring white jumpsuit by Elie Saab. The outfit featured a plunging neckline that reached down just above her navel with a sheer top and voluminous sleeves covered in silver sequins designed to look like graceful dragonfly wings.

Her caramel-colored locks were parted down the middle and let loose with some loose waves. She added some sparkle with a VRAI diamond necklace while putting on a nude-colored lipstick. The 51-year-old star, who served as one of the performers at the event, was later seen posing with Selena, who was tapped as the host. 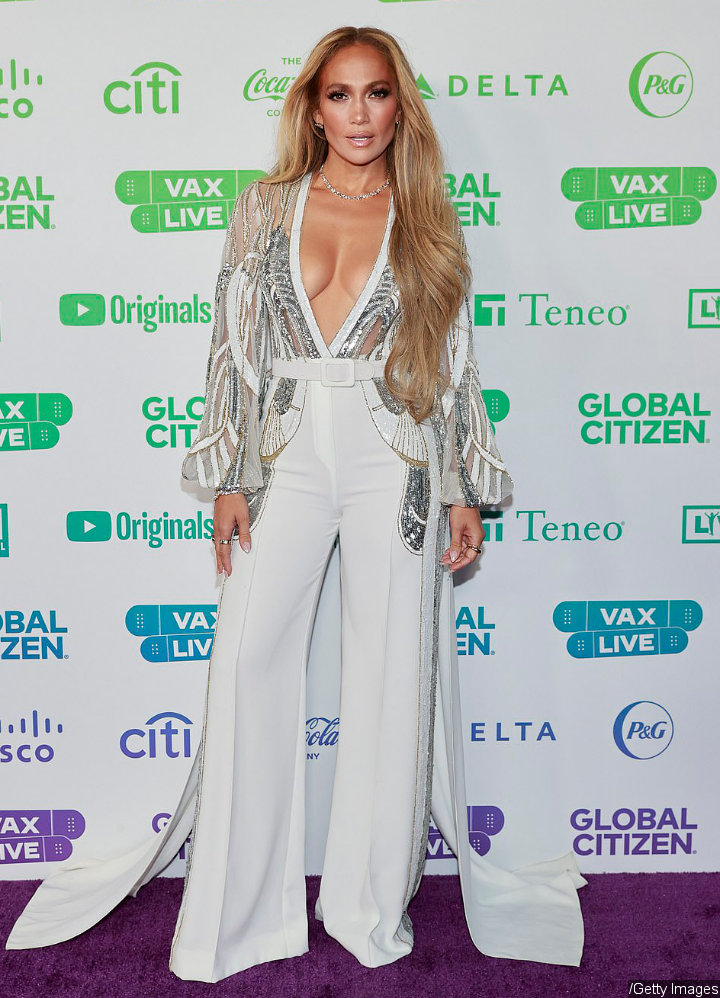 Also showing her best style on the red carpet was Chrissy Teigen, who wore a silky orange off-the-shoulder dress. The outfit featured a translucent panel over her cleavage and was ruched around her midriff with a matching belt cinched tight.

The model held a clutch bag in matching color and completed her look with brown open-toe heels, while accessorizing with a pair of big earrings and some gold rings. Her daughter Luna joined her while posing for photographers, pretending to be hiding under Chrissy’s long train. 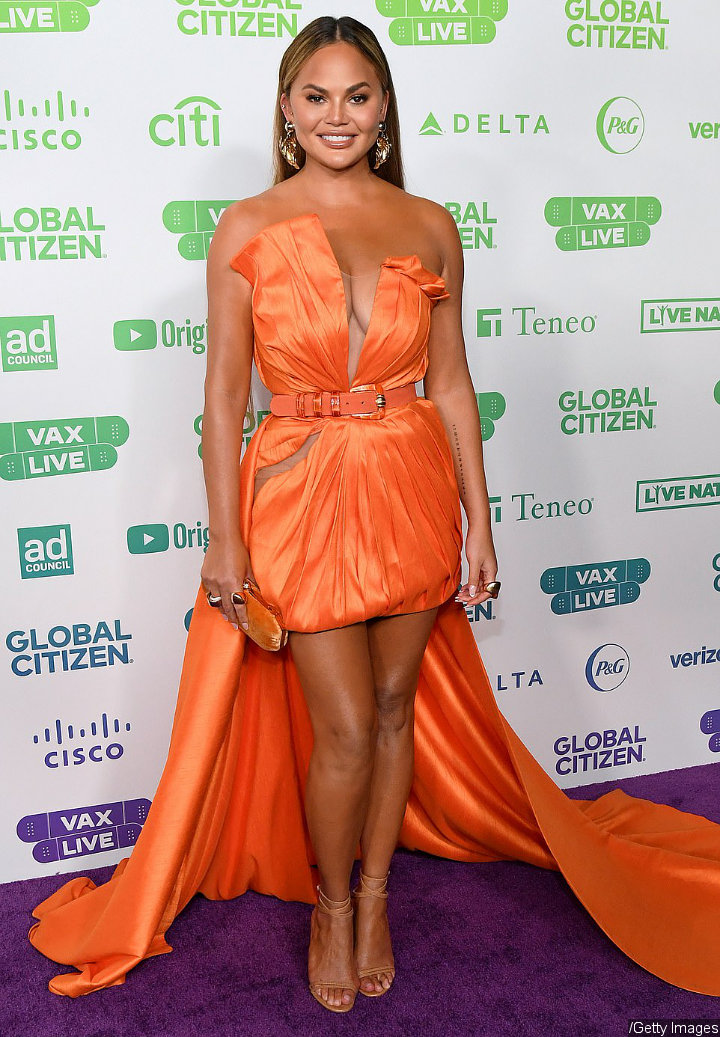 Olivia Munn added color to the event with her pajama-like yellow satin suit covered in elegant yet sparse paisley patterns. Her raven locks were styled in loose waves and cascading down her shoulders while she carried a golden purse.

Also supporting the benefit concert was Prince Harry, who made impassioned speech about the importance of getting vaccinated. Taking the stage in what marked his first public appearance since returning to the U.S. after his grandfather Prince Philip’s funeral, he first thanked the frontline workers.

“Tonight is a celebration of each of you here, the vaccinated frontline workers in the audience and the millions of frontline heroes around the world,” he said in his address. “You spent the last year battling courageously and selflessly to protect us all. You served and sacrificed, put yourselves in harm’s way and with bravery knowing the costs. We owe you an incredible depth of gratitude, thank you.”

“But we’re also coming together because this pandemic cannot end unless we act collectively with an unprecedented commitment to our shared humanity,” he reminded the audience. “The vaccine must be distributed to everyone everywhere. We cannot rest or truly recover until there is fair distribution to every corner of the world.”

“None of us should be comfortable thinking that we could be fine when so many others are suffering. “In reality, and especially with this pandemic, when any suffer, we all suffer. We must look beyond ourselves with empathy and compassion for those we know, and those we don’t. We need to lift up all of humanity and make sure that no person or community is left behind,” he concluded his speech.

The Global Citizen: Vax Live concert will be broadcast on May 8 at P.M. ET on CBS and ABC, followed with broadcast on FOX at 11 P.M. Other performers at the event include Eddie Vedder, Foo Fighters, J Balvin, H.E.R. as well as K-pop group NCT 127.