Home » Simon Cowell: I was close to never walking again after bike accident

Simon Cowell: I was close to never walking again after bike accident

Simon Cowell says he almost smashed his 'spine to pieces'

He missed the finals of last year’s series of BGT and has kept a low profile since. Speaking about the incident on US TV for the first time, Simon said: “It could have been a lot worse. When I saw the X-ray, I really nearly could have smashed my spine to pieces. So I literally wouldn’t have been able to walk. I knew I’d broken my back the minute I landed. It was really kind of sudden and it hurt.” Reflecting on how the moment had changed his life, Simon said that without partner Lauren and son Eric’s unwavering support and care he “couldn’t have got through it”. He insisted the accident had brought them closer as a family.

Simon added: “I’ve never been in this situation in my life where you literally can’t move. The pain was off the charts. But you’ve got to stay positive.

“I made a promise to myself I’d be fitter than I was before I had the accident. Sure enough, that’s what happened.” He said the worst part of his ordeal was the fear of “embarrassing” himself in front of his seven-year-old son Eric.

He said: “I was so embarrassed about coming home looking about 100, because I couldn’t walk, and I have these metal rods in my back and these screws.

“She obviously said something to him because he came in. I was lying in bed and he said, ‘Daddy, you’re like Iron Man’.

“And I thought that was the sweetest thing and it meant a lot.”

Simon had fallen off an electric bike he was testing at his house in Malibu, California, in August. 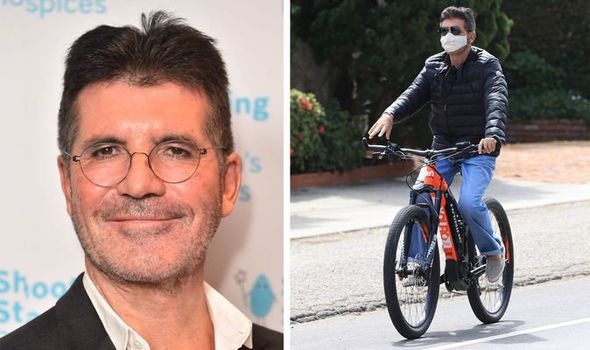 He added: “I’ve got to be honest with you, it wasn’t that bad actually, breaking your back. I mean it wasn’t great for three to four weeks but, after that, you get through it. I had to do so much exercise. I actually feel better than I did before the accident.”

He then joked: “If you want to feel healthier, break your back.”

Simon was forced to miss out on filming the latest season of America’s Got Talent due to his injuries.

However, his co-stars – including judges Sofia Vergara, Howie Mandel, and Heidi Klum, and host Terry Crews – said they did miss the pop mogul.

While the US version of the hit talent show is going ahead, it was announced last month that Britain’s Got Talent will not take place in 2021 due to the pandemic. ITV said the programme was pulled from the schedules in order to safeguard “the wellbeing and health of every person involved”.