The third annual Earth Focus Environmental Film Festival, and the first to take place virtually in light of the Covid-19 pandemic, kicks off tonight and runs through April 23 via Southern California’s flagship PBS stations PBS SoCal and KCET along with national independent satellite network Link TV. The opening-night film is the West Coast premiere of Playing With Sharks, the extraordinary life story of pioneering scuba diver Valerie Taylor, who has dedicated her life to exposing  the myth surrounding the fear of sharks.

The film documents her quest as well as history including her work on several films including 1975’s iconic Jaws. National Geographic Documentary Films acquired the film out of the 2021 Sundance Film Festival with plans to release it later this year. Following the 7 p.m. PT screening I will moderate a conversation with Taylor, writer-director Sally Aitken and producer Bettina Dalton all joining me together from Australia. (Full disclosure: I am the host of KCET’s Must See Movies as well as the long-running KCET Cinema Series). I will also be doing the same for the closing-night film Citizen Nobel in conversation with its Nobel Prize-winning subject Jacques Dubochet and director Stephane Goel both joining me from Switzerland. 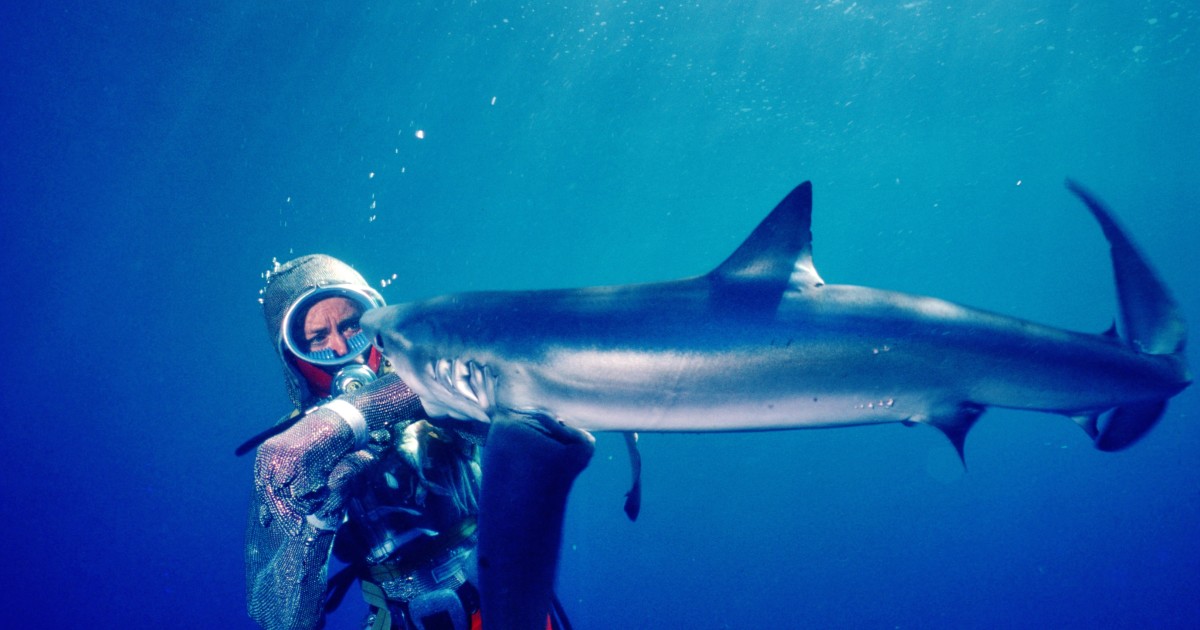 The festival, which consists of nine virtual film screenings and post-discussions taking place on the Eventive platform, also will include PBS’ three-part Earth Day special Greta Thunberg: A Year to Change the World on April 22.

The Earth Focus Environmental Film Festival is designed to encourage better understanding of and dialogue on environmental issues, and motivate audiences to create positive change in their own community. “The festival extends public media’s mission of strengthening communities through education. The virtual event engages members, viewers of all ages, influencers and media while raising funds to support public media’s future environmental programming,” according to organizers. 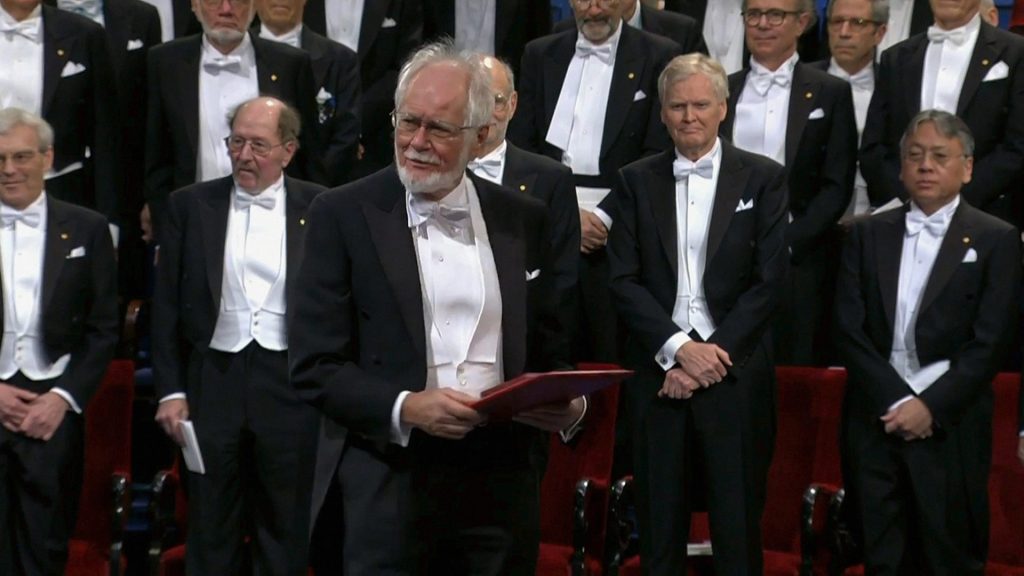 Original content related to Earth Month programming on related topics ranging from environmental justice to climate activism will be available on the PBS SoCal, KCET and Link TV websites. Ticket and festival pass information is available there as well.

The festival schedule is as follows:

The extraordinary life story of pioneering scuba diver Valerie Taylor, a fearless marine maverick whose passion for sharks knows no bounds – even when there should be. Taylor has dedicated her life to exposing the myth surrounding the fear of sharks. Featuring Q&A Guests: Writer/Director Sally Aitken Creator/Producer Bettina Dalton and the subject of the film, Australian pioneering marine conservationist, cinematographer and renowned shark expert Valerie Taylor. Moderated by KCET CINEMA SERIES Host and Deadline chief film critic Pete Hammond.

An intimate portrait of the growing movement amongst Native Americans to reclaim their spiritual, political and cultural identities through food sovereignty, while battling the trauma of centuries of genocide. Featuring Q&A Guests: Director Sanjay Rawal, Producer Tanya Mellier and Founder of the Native American Culinary Association Nephi Craig. Moderated by DeLanna Studi (Artistic Director, Native Voices at the Autry, Autry Museum of the American West).

Embark on a journey to explore what the future could look like by the year 2040 if we simply embraced the best solutions already available to us to improve our planet and shifted them rapidly into the mainstream. Structured as a visual letter to his 4-year-old daughter, the film blends traditional documentary with dramatized sequences and high-end visual effects to create a vision board of how solutions could regenerate the world for future generations. Featuring Q&A Guests: Award-winning Director Damon Gameau (That Sugar Film). Moderated by TBA.

F. Murray Abraham (Amadeus, The Grand Budapest Hotel, Homeland) narrates the wild experience of the Okavango Delta, an unlikely oasis and lush paradise in Southern Africa that connects and supports a wide array of creatures. In episode one of this three-part series that premiered as episodes of NOVA, viewers explore the landscape and wildlife of the Upper Okavango River. A lioness severely injured by a buffalo is left for dead by her pride. Now handicapped, she has to survive in the swamp alone, hunting to feed her cubs. Featuring Q&A Guests: Directors Dereck and Beverly Joubert (Eternal Enemies, Eye of the Leopard, Last Lions, Reflections on Elephants).

EARTH FOCUS: The New West and the Politics of the Environment – Mon., April 19 at 7 p.m.

Iconic Nevada Senator Harry Reid set the foundations for a green new deal in the state using power in new ways to settle water wars with respect for Native Americans, protect endangered species and usher in a just transition to renewable energy. Reid forged allegiances between unlikely allies and crafted policy to grow the economy of his home state while protecting its wilderness and in the process, redefined the future of the West. The conversation immediately following the screening is courtesy of the Environmental Film Festival in the Nation’s Capital (DCEFF). Featuring Q&A Guests: U.S. Senator Harry Reid, Author Adam Jentleson (Kill Switch: The Rise of the Modern Senate and the Crippling of American Democracy) and Senior Field Director of the Conservation Lands Foundation Jocelyn Torres. Moderated by Executive Producer Jon Christensen.

Since 2015, twenty-one plaintiffs, now ages 13 to 24, have been suing the U.S. government for violating their constitutional rights to life, liberty, personal safety and property through their willful actions in creating the climate crisis they will inherit. Featuring Q&A Guests: Filmmaker & Scientist Christi Cooper, Co-Lead Counsel Phil Gregory, Alaskan Federal Plaintiff Nathan Baring. Moderated by the Director of Programming for the Environmental Film Festival in the Nation’s Capital (DCEFF) Brad Forder.

Travel with Greta Thunberg as she takes her fight to a global stage in this three-part, on-air event. In Part One she sees impacts of climate change at three locations: melting glaciers and dying trees in Canada, and fire devastation in California. And when a UN conference moves to Madrid, she sails across the ocean during life-threatening storms. Part Two follows Greta’s journey from the World Economic Forum in Davos, Switzerland, to Poland, where she speaks with miners who have lost their jobs. She also visits the UK, where she meets with one of her inspirations — Sir David Attenborough. Part Three takes Greta to Switzerland and Denmark to investigate potential solutions to limit climate change and looks for lessons from the world’s response to COVID-19.

When Jacques Dubochet receives the 2017 Nobel Prize for Chemistry, his life changes. Out of the shadows and into the light, he is suddenly contacted from all sides. What can he do with his voice, which is now heard by everyone? How should he, as a ‘noble citizen’, fulfill his responsibility as a researcher and human being? A speech by Greta Thunberg turns everything upside down. Featuring Q&A Guests: Director Stéphane Goël and Nobel Prize Winner and subject of the film Jacques Dubochet. Moderated by KCET MUST SEE MOVIES host and Deadline chief film critic Pete Hammond.