Suzanne Somers Reveals How She Made Peace With John Ritter (Exclusive)

Suzanne Somers is opening up about her incredible career and how she’s been able to get back up again — better than ever — after a few setbacks.

The 74-year-old actress spoke to ET’s Kevin Frazier as part of ET’s Iconic Leading Ladies of the ’90s week — which also features interviews with Jane Seymour, Melissa Joan Hart, Tisha Campbell and Patricia Richardson — and candidly talked about everything from her and husband Alan Hamel’s recent scary fall down the stairs which resulted in her breaking her neck and fracturing her spine, to famously getting fired from Three’s Company after asking for a raise.

In October, Somers revealed that she had neck surgery after falling down the stairs at her home. She described the scary incident to ET.

“It’s not Alan’s fault, but I had fractured my hip, and I’m standing on the top of our bedroom stairs waiting for him with my crutch, and he comes out and we — there was, like, a boulder, that’s been built into the stairs — he missed his footing, he was holding my hand,” she shares. “He fell down, and I fell down on top of him. And I broke my neck and fractured my spine. So, it’s been a long recoup — two days ago they took off the dog collar — so, I’m just so happy I can turn my head from side to side!”

It’s been eight weeks since her surgery, but Somers hasn’t let it keep her down.

“All of a sudden yesterday, I got out of bed, and I walked, started walking around the room and realized, ‘Oh, I don’t need [crutches]!'” she shares.

Somers is no stranger to coming back stronger after what at first appears to be major setbacks. The icon spoke to ET about her incredible business success — most famously, popularizing the ThighMaster in the ’90s — which began after she was fired from Three’s Company. Somers played beloved secretary Chrissy Snow for five seasons but her contract was not renewed after she asked for a raise that would put her on par with co-star John Ritter’s salary. The show, which also starred Joyce DeWitt as Janet Wood, went off the air in 1984 after eight seasons.

“So, we went in to renegotiate for year six because we had to, my contract was up,” she explains. “And they fired me. They fired me for asking to be paid commensurate with the men. … They need you as the example so no other woman in television will get uppity and think that they could ask for parity with men.” 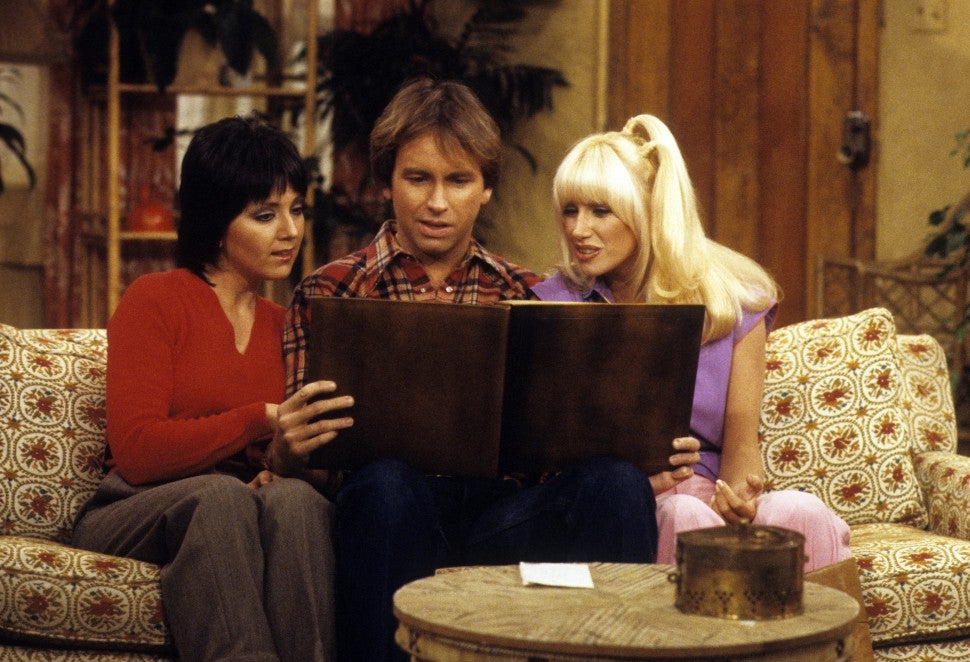 But Somers now realizes it was a blessing in disguise.

“Because I sat in my living room, like ‘Why, why did I do this, why?’ I had the greatest gig in television, this character that people loved,” she recalls. “And I heard a voice. And the voice in my head said, ‘Why are you focused on what you don’t have? Why don’t you focus on what you do have?’ And I sat there and I thought, ‘What do I have?’ And then I realized, ‘Wow, I have enormous visibility. Everybody in this country knows my name.'”

“I was just in Israel and I had a private meeting with [Prime Minister of Israel] Benjamin Netanyahu and he comes up to me and goes, ‘I know about the books but I’ve been watching you for 25 years,'” she continues. “I said, ‘You have?’ He said, ‘Yeah, for the longest time in Israel we had one television station and one sitcom.’ So, the power of television is immense and it’s global. So that’s how this journey began.”

Somers also reflected on her time playing the role of Chrissy, and many fans didn’t realize that she was a 31-year-old single mother at the time.

“I was just really involved in our show and I had a child so, you know, I had to after work get home and make dinner,” she adds.

And of course, the chemistry between her and the late Ritter was undeniable.

“He’s the greatest physical comic of our era, on par with Dick Van Dyke,” she notes. “John Ritter could flip over a couch and it was choreographed like a dance. He didn’t count it out, but he did it the same way each time. I learned so much watching him. He was my real coach. I would just sit there and watch, see his brilliance and he had his demons. You know, when people are that nice they usually have demons. But the chemistry between Chrissy Snow and Jack Tripper was magical and I think after I was fired, I think he irrationally got mad at me because he lost his sparring partner. I would be mad too and there was no going back. It wasn’t up to me, it was up to the egos of the producers and had they been smart — I was on what, six years? It probably would have stayed on another six.”

“Somebody’s got to be the sacrificial lamb,” she adds. “It worked ultimately in my favor. That was my lesson — when one door closes, you know, crawl through the window.”

She does acknowledge that it was hard being estranged from her castmates and crew.

“Oh, it was so sad,” she shares. “It was so sad. It was like being shunned from your family and whatever those producers said to them when they went back to the rehearsal hall, they painted me as greedy. They painted me as she’s trying to ruin the show, and so the whole show — cast and crew — shunned me. … So, I never talked to anybody on that show ever again. Ever again.”

Still, Somers was able to make peace with Ritter before he died suddenly in September 2003 from an undetected flaw in his heart called an aortic dissection. Somers says the late actor reached out to her via a phone call and that they were actually planning to do a show together before his death.

“He said, ‘I forgive you,’ which took a lot of maturity on my part to say, ‘You forgive me?’ So I said, ‘thanks,'” she says of the phone call. “He said, ‘You know, I’m doing a show, 8 Simple Rules, and we’ve got this dream sequence and I have this nightmare, and in the nightmare you and Joyce [DeWitt] are in the nightmare. So I was kind of silent. I said, ‘You know, the public has such a craving for you and I to be together again. I don’t think my coming back as a nightmare is the best thing that we can do.’ I said, ‘Why don’t we look for a proper project for the two of us?’ and so we decided to do that. Let’s find a show for the two of us and then a month later he died.”

“Anyway, I love resolution and peace and, you know, if I had stayed on Three’s Company and I did do Step by Step for seven years, which I loved,” she continues. “But I would have been just another actress going from sitcom to sitcom — which is not a bad life — but the life I created, I owned. It was my business and the direction I wanted to go, and Alan and I heard of the Home Shopping Network. He said, ‘You should go on Home Shopping.’ I said, ‘Oh god, I was on primetime, are you kidding?’ He said, ‘I think it’d really do well here.'”

The rest, of course, is history.

“I pitched the ThighMaster and we stopped counting at 10 million units,” she says of her most iconic product. “The audience trusted me and maybe it’s because of the purity of Chrissy Snow. And I think Chrissy Snow was essential for me to use as my launch pad.”

These days, Somers has no plans of slowing down. Her 27th book, A New Way to Age: The Most Cutting-Edge Advances in Antiaging, was released in January, and Somers shared what she says is the key to longevity.

“I’m young at heart and healthy,” she says. “You know, I always thought — I’m 74 — and I always thought at this age, I’d be old, but I’m not old. I’m chronologically old, but I’m not old. And so, what I did figure out in all these books I’ve been writing, is that aging is about worn-out parts. Like, if you had a Maserati, you would pay close attention to the sounds of that car. If the engine was making, like, a rattling noise … you take it to a mechanic, right? They’d replace the parts. So that’s what I do, when I hear the language of the body. So, what is the language of the body? If you don’t sleep well, that’s a language. If you’re in a bad mood, that’s a language. If you’ve got stringy hair and bad nails and things like that, that’s a language. But, what I know about cellular health and hormones is the key to, I think, longevity.”

Back in 2016, Somers also shared with ET the secret to her 43-year marriage with Hamel. Watch the video below for more.