The Best Smart Speakers For Audiophiles

Amazon’s “Echo” line of smart Bluetooth speakers has become enormously successful over the past few years thanks in large part to Alexa, the company’s smart assistant.

But while Amazon has won praise for Alexa — an AI (artificial intelligence) platform that lets you control everything from smart-home accessories to music settings with your voice — its speakers haven’t exactly won over the audiophile crowd.

Although Amazon’s first-party speakers work very well, the company has started letting other brands build Alexa into their speakers as well. Today, some of the best audio companies in the world have started releasing Alexa-compatible speakers that will appeal to people who care about sound just as much as smart-home functionality.

Know Before You Row: How to Find the Best Home Rowing Machine for You

4 Ways Venue Owners Can Connect With Audiences During the Pandemic

What Are the Best Alexa Speakers For Music?

There are many factors to consider when choosing the best audiophile Alexa speaker for you; below are the most important ones, which we considered while we were researching this list.

Size: Our Alexa speaker recommendations run the gamut from pocket-sized to bookshelf sized. They won’t replace a full home theater system, but they’re perfect for a home office, bedroom, or patio.

Wired vs. Wireless: This guide contains a mix of totally wireless speakers and others that need to be plugged into a wall. Every pick is portable enough that you could take it with you, though.

Battery Life: Our minimum battery life requirement for this guide was 12 hours of playtime per charge, which is enough to get you through a full day.

Durability: An electronic’s resistance to dust and water is measured on the IP (ingress protection) scale. The totally wireless speakers we’re recommending both have an IP67 rating, which means they’re completely dust-proof, and can be submerged in up to 3.3 feet of water for 30 minutes or less.

Multi-Speaker Pairing: Each of the speakers we picked will sound great on our own, but some can be paired with additional speakers to create a stereo pair or extended wireless audio system.

Other Smart Features: Support for Amazon’s Alexa was our primary concern, but some speakers we’re recommending support other smart assistants, like Google Assistant and Apple’s Siri, too. 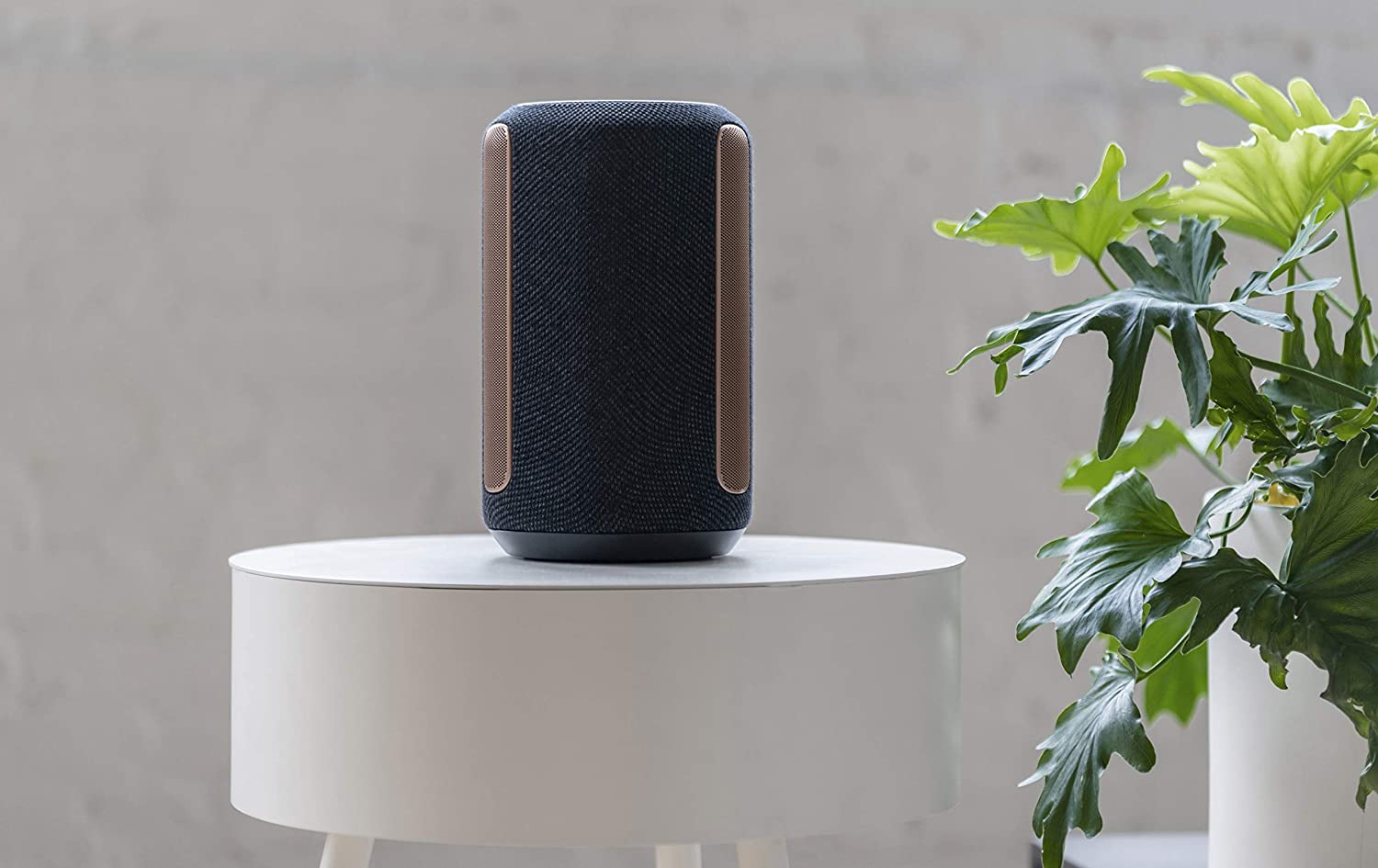 Announced at CES, Sony’s SRS-RA3000 is the newest Alexa-enabled speakers for audiophiles.

It uses Sony’s 360-reality technology, which sends sound outward and upward to create a surround-sound effect from a single speaker. The company has implemented this in its newer speakers, and allows you to stream music mixed for this format on TIDAL. We haven’t gotten a chance to test this speaker for ourselves, but Sony’s other recent audio hardware — specifically its noise-cancelling headphones — have impressed us.

While it should sound great as a mono speaker, two SRS-RA3000s can be paired to create a stereo audio system. Not only will this improve the sound of stereo recordings, but it’ll make the surround sound effect Sony developed sound more realistic. We’ve heard speakers that use a similar feature, and the difference is immediately clear.

The SRS-RA3000 needs to be plugged into a power source at all times to work, but it’s small enough (15.19 inches tall and 5.5 pounds) that you can move it around fairly easily. That said, it’s the biggest and heaviest speaker we’re recommending, so you may want to think about that if you’re short on space. The upside is that Sony used all of that room to fit audio hardware.

If you’re a serious audiophile who wants to add an Alexa-enabled speaker to your space, Sony’s SRS-RA3000 is the latest and greatest choice. 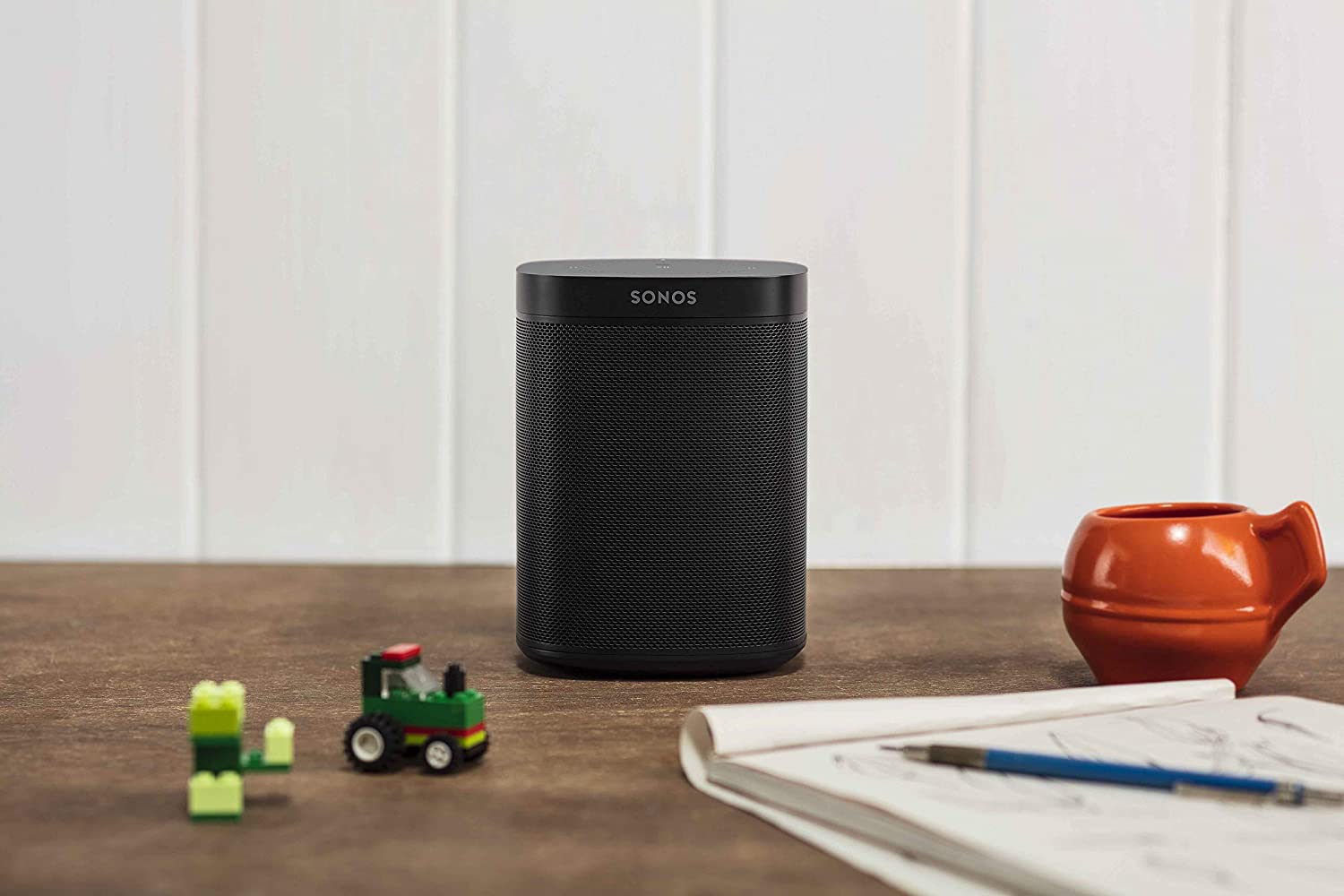 Sonos spearheaded the connected speaker revolution several years ago, and its One speaker was the first to have microphones and Alexa support built in. This second-generation version doesn’t change how it sounds, but does have an updated processor inside.

At about 6.3 inches tall and 4.7 inches deep, the Sonos One (Gen 2) is one of the smaller speakers in our guide. It looks like a standard bookshelf speaker because, well, that’s what it’s supposed to replace. This isn’t a totally wireless speaker, so it needs to be plugged into an outlet at all times, but it’s still small enough to move from room to room.

It doesn’t have an IP durability rating because it’s not designed to be used out of the house, and you should avoid spilling water on it, or exposing it to dust and dirt. Unlike other speakers in our guide, the Sonos One (Gen 2) allows you to stream music over WiFi instead of Bluetooth. The advantages are extended range, and support for high-resolution audio.

I’ve tested the first-generation Sonos One pretty extensively, and have liked it a lot. The sound has always been relatively balanced (a little bass heavy sometimes), which makes listening to podcasts and music good. The speaker doesn’t lose any audio quality at loud volumes, either. This is the only smart speaker I’ve bought more than once, which is the highest praise I can give a gadget.

The Sonos One (Gen 2) benefits from the company’s previous efforts to make smart speakers easier to use. It can be paired to another Sonos One (2nd Gen) to create a stereo pair, or any of Sonos’ speakers to create an extended wireless network of speakers. As long as they’re connected to WiFi, you can play the same track from each Sonos speaker in your house simultaneously, or play something different on each one. This process sounds complicated, but Sonos’ app (iOS and Android) makes it pretty easy.

It’s no surprise that the Sonos One (Gen 2) is the smartest choice in our guide. It supports Amazon’s Alexa, Google Assistant, and supports AirPlay 2, a wireless standard created by Apple that lets you stream high-resolution audio and video. It doesn’t have support for Siri built in (Apple keeps that locked to its own devices), but the ability to access other smart features from Amazon, Apple, and Google in a single device is very impressive.

If you want an extremely smart speaker that’s versatile and sounds great, this is your best choice. 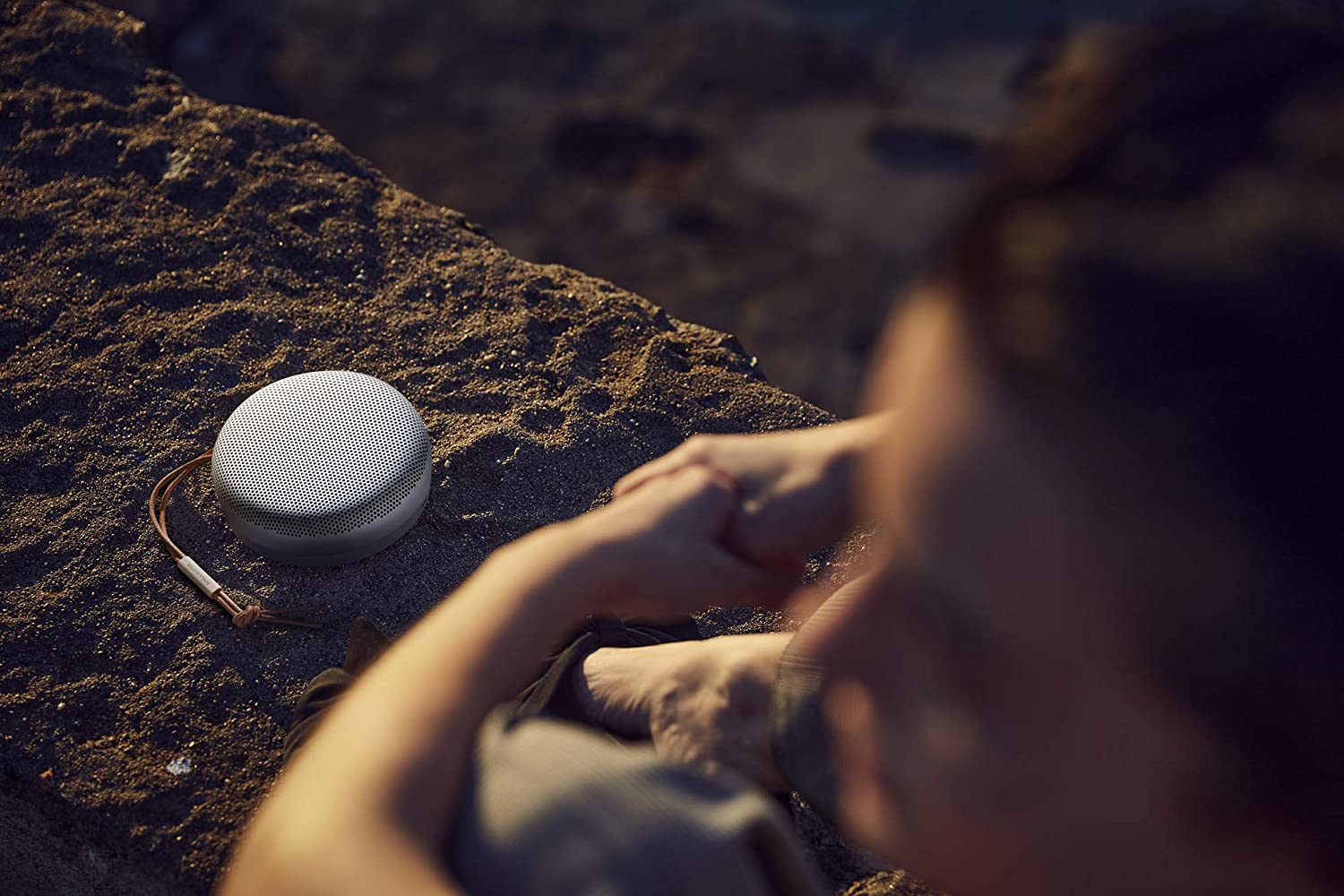 Bang & Olufsen just released the second-generation of its A1 portable Bluetooth speaker, and this time it’s got Alexa inside.

At 1.83 inches tall and 5.2 inches deep, the A1 (2nd Gen) is the smallest speaker in our guide. It’s totally wireless, and uses the cutting-edge Bluetooth 5.1 standard, which is a lot more power-efficient than previous versions. Bang & Olufsen says the A1 (2nd Gen) gets up to 18 hours per charge when listening at “typical listening volumes,” which is no small feat for a speaker this size.

Bang & Olufsen has designed this speaker to maximize its audio performance. Its domed-shape allows the A1 (2nd Gen) to send sound in multiple directions, so you don’t have to position it in a particular position and find a “sweet spot.”

The company has managed to fit two drivers (the part of a speaker that produces sound) into the unit: a 3.5 inch woofer to handle bass and midrange frequencies, and a 0.6 inch tweeter to take care of the treble. Having multiple drivers helps speakers deliver clearer, more accurate sound by intelligently sending certain sounds to each driver. While the A1 (2nd Gen) is an excellent choice on its own, it can be paired with an additional A1 (2nd Gen) to create a stereo pair.

It may not have any additional smart features, but Bang & Olufsen’s A1 (2nd Gen) holds its own against larger competition. If you want an excellent, advanced-sounding smart speaker you can take anywhere, this is our pick. 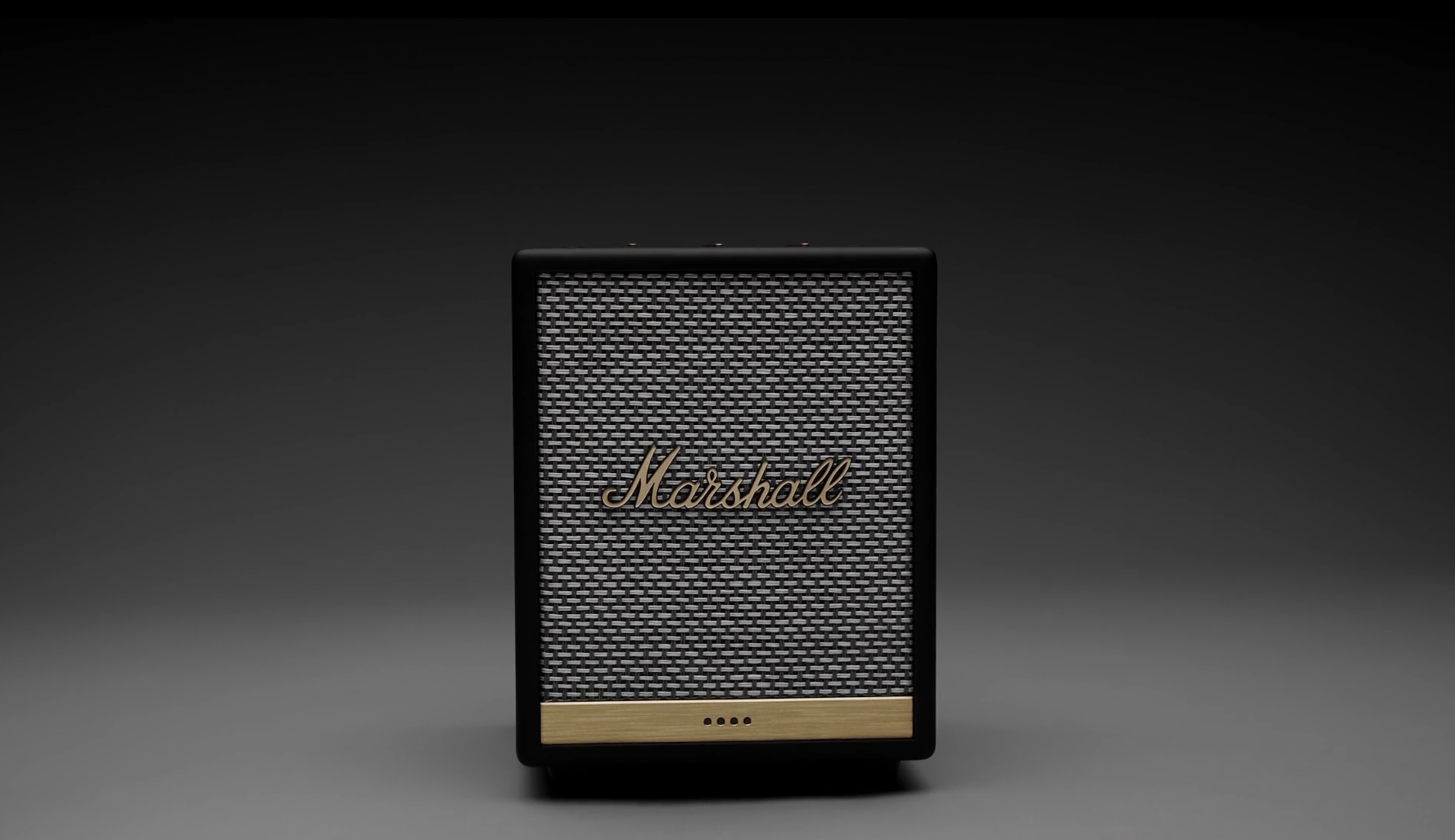 The Uxbridge is the latest Alexa-enabled speaker from Marshall, and it’s its most portable option yet.

We’ve tested the Uxbridge for ourselves, and it stands out in a couple of positive ways. Out of the box, the speaker sounds very good. It’s not neutral, but the EQ Marshall used doesn’t overly boost the bass or treble, and leaves room for the midrange. We enjoyed all of the songs we listened to, and were especially happy with how well they sounded when the volume was cranked way up.

If you want to add a little high or low end, you can adjust the bass and treble by pushing buttons on top of the speaker. This is helpful if a certain song sounds a little off, and you need to make an adjustment. It’s also easier than using an app on your phone, which can be tedious and take time. Another useful feature is the Uxbridge’s physical mute switch, which turns its microphone on and off.

The only extra the Uxbridge lacks is stereo pairing: This is a mono speaker only. It isn’t a battery-powered, but the speaker is only about 6.5 inches tall and weighs 3 pounds, which means it’s one of our smallest picks.

Marshall’s Uxbridge is the company’s newest smart speaker, and it managed to pack an impressive amount of features into a small package without sacrificing very much. If you want a brand new speaker with great sound and a classic look, this is it.