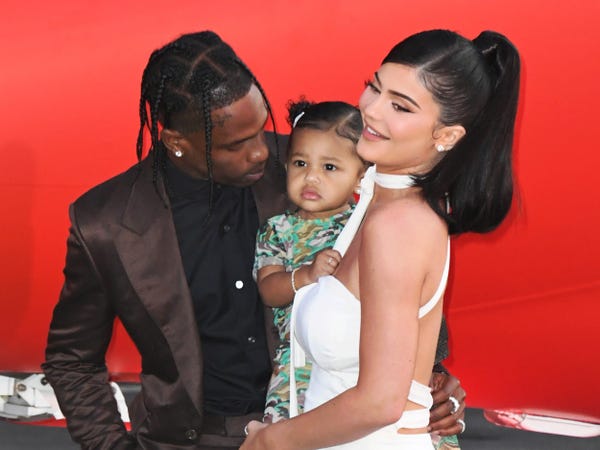 Travis Scott is doing his part to make sure that his and Kylie Jenner's 2-year-old daughter Stormi Webster grows up to be a "strong" woman.

The 29-year-old musician opened up about his desire to teach Stormi that she can do "anything a man can do" on Wednesday's episode of .WAV Radio.

"I feel like it's way more important now to protect our young Black daughters, women," he said, continuing, "Making sure they have the knowledge of just how to carry yourself, how to move in this world, how to be strong, how to not even be scared to take that risk on any idea."

Scott added, "Now, more than ever, it's like they have the vision. Whether it's for anything a man can do, anything a woman can do. They got the pure vision."

The Houston-born rapper has been vocal about his support for the Black Lives Matter movement and has advocated for police reform in the U.S.

He's also donated money to causes he cares about.

And after Republican Alabama Gov. Kay Ivey signed a law effectively banning abortions in the state in May 2019, Scott donated the proceeds from merchandise sold at the Hangout Music Festival to Alabama's Planned Parenthood.

Although Stormi is only 2 years old, the "SICKO MODE" rapper said he's already educating her on current events and women's rights.

"It's amazing just to watch my daughter grow," he told GQ in August. "I'm keeping her aware of what's going on in the world. As a parent, I'm always instilling knowledge, even at this age."

DADA 🤍 happy birthday to daddy of the year! i’m slowly but surely starting to accept the fact that storm is a daddy’s girl. 😫 but whatever. we went half on greatness! the most beautiful, smart, loving and funny little baby. the best gift. ok i’m crying. love you forever! @travisscott

While Scott and Jenner officially split up in October 2019, they continue to coparent their daughter. Three months after their breakup, Scott told XXL Magazine that he will "always" love the reality star.

"Her mom and I came up with the name Stormi together. I love her mommy and I always will," he said, adding, "The hard part about relationships is just trying to be in one without a million outside voices interfering."

Despite their decision to part ways, Scott said he'd been spending quality time with his daughter, explaining that fatherhood turned out to be "better than what I thought it would be."

"Stormi is one of the best human beings I know. She's like my best friend. She makes life a little bit easier. She just inspires me and she surprises me every day with how she's thinking," he said. "It's so crazy."