I say, old bean! This sauced-up panto is a right treat: VERONICA LEE reviews Jack And The Beanstalk

Jack And The Beanstalk (London Palladium)

Verdict: A triumph of smut and glamour

Since producer/director Michael Harrison brought pantomime back to the Palladium in 2016 after a decades-long absence, it has quickly become a star-laden annual fixture, mostly due to the megawatt presence of Paul O’Grady and Julian Clary.

Sadly, O’Grady no longer dons Lily Savage’s frocks. But Clary has created a sort of repertory company with Paul Zerdin, Nigel Havers and Gary Wilmot, who each year appear to be having as much fun as the audience.

And so it proves with Jack And The Beanstalk, a triumph of smut and glamour — and that’s just Clary, decked out in fabulous costumes as various legumes and suggestive vegetables as The Spirit Of The Beans, delivering double entendres from Harrison’s sparkling script. When he comes on as a runner bean, he avers that he will ‘shoot up against a wall’. 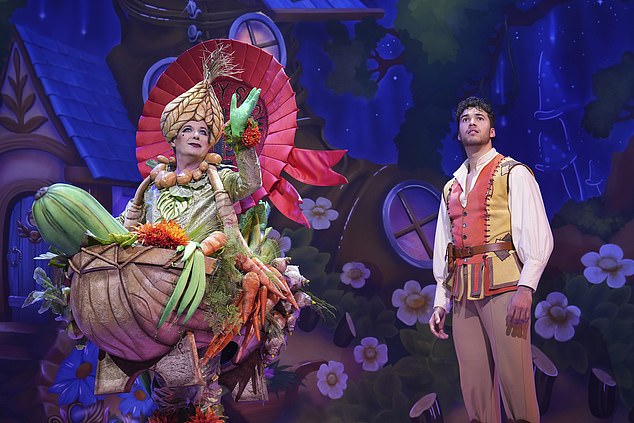 The script is more family-friendly than in previous years, but the adults won’t be disappointed at the abundance of good-natured filth

The story, such as it is, is that The Spirit comes to the aid of Jack’s mother, Dame Trot (Dawn French), who has to sell her cow, Pat (Rob Madge), to pay off the giant’s henchwoman Mrs Blunderbore (Alexandra Burke) and then help rescue King Nigel (Nigel Havers) from the giant’s castle.

The political jokes are good — Clary first enters as an Australian jungle bean, Matteupus Hancockius, which ‘can be fatal for pensioners’, and ‘Boris’ is mentioned; having impregnated Dame Trot in the interval, he had to leave early as he had a party to go to.

Favourite old gags appear, too — Clary offers his magic chopper to cut the beanstalk and send the Giant to his grisly fate.

In a show that echoes the variety this theatre was once famous for, Harrison packs a great deal in, including panto set-pieces and a few song-and-dance numbers involving the large ensemble.

And while the show feeds off Clary’s energy and his ‘smut tsunami’, the other principals all get their moment, too. French and Burke have a Strictly dance-off, Gary Wilmot (Queen Nigella) does his ‘list’ song party piece — this year ‘I’ve Not Been Well’, about medical conditions — while ventriloquist Zerdin (with puppet Sam) as Silly Simon shines in his tongue-twister scene. 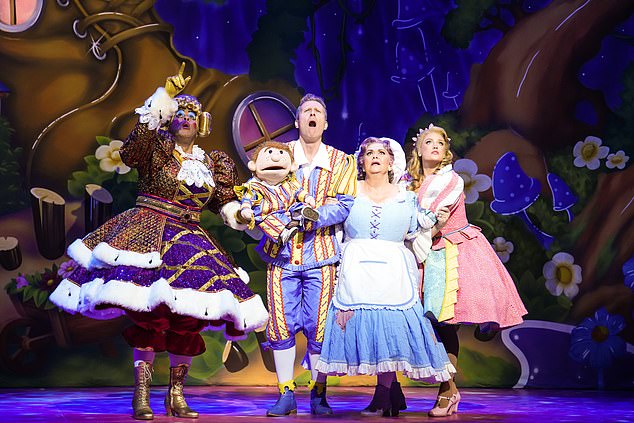 The show oozes quality — and so it should at £150-plus for the most expensive seats — in Mark Walters’ design, Ben Cracknell’s lighting and costumes by Hugh Durrant, and runs at a lick under Harrison’s zippy direction

Havers again gets a beasting from the wonderfully waspish Clary (mostly for a supposed bladder problem), but then so does everybody. Even Louis Gaunt and Natalie McQueen as the young lovers Jack and Jill are mercilessly ribbed for being musical theatre performers.

The show oozes quality — and so it should at £150-plus for the most expensive seats — in Mark Walters’ design, Ben Cracknell’s lighting and costumes by Hugh Durrant, and runs at a lick under Harrison’s zippy direction.

The huge beanstalk rising from the stalls provides a first-act finale wow moment, while children will be suitably impressed by the animatronic giant and ogres (by The Twins FX).

The script is more family-friendly than in previous years, but the adults won’t be disappointed at the abundance of good-natured filth.

Verdict: Tennessee twist on a classic

Or if you prefer, Dolly’s new musical whacks Robert Bathurst’s Scrooge on the backside with a banjo and puts the yee-ha into humbug.

Adjustments have to be made to the story to fit the transatlantic setting — the Depression era Appalachian mountains of 1936 Tennessee. So Scrooge becomes a rapacious smalltown industrialist, chosen by crooked Marley as a business partner because he ‘makes numbers tell stories’.

And the ghosts of Christmas Present, Past and Yet To Come are played as a seamstress, a coal miner and a black-clad mean fiddler.

But the show’s greatest assets are Dolly’s music and lyrics (sadly not the star in person), played on folk instruments including banjo, violin, washboard and triple-thwacked double bass.

Our heartstrings are tugged as much as our toes are set tapping by the melancholy strains of Appalachian Snowfall, the wistful nostalgia of young Scrooge and his dead sister’s Three Wishes, the jaunty Smoky Mountain Christmas, plus the schmaltzy Circle Of Love. And the climax is a full-on hoedown, raucously performed on the old skinflint’s coffin.

Best known for wry and rueful comedy, Bathurst is a positively presidential Ebenezer with a thick moustache settled on his upper lip like an old grey possum.

Moving about the stage with Nixonian gravitas, he stoically observes his life story.

Eventually, he wrests a song of his own from the townsfolk, whimpering meekly: ‘I’ve been changed, rearranged . . . saved’ (sounding rather sweetly like Kermit the frog in that other A Christmas Carol adaptation).

At first a little turgid, Alison Pollard’s production, set mostly in the town’s grocery store, grows on you like a bottle of moonshine. High-tech it is not.

Squeezed onto the shallow stage of this concert venue like an excitable church choir in the village hall, it majors on God-lovin’ atmosphere rather than special effects. And in that department it’s in line with Dickens’s Christmas message of hearty good cheer.