Home » Celebrities » Who Did Donald Trump Really Meet With At His New Jersey Golf Course Over The Summer?

Who Did Donald Trump Really Meet With At His New Jersey Golf Course Over The Summer?

Most former presidents keep a low profile following their departure from the White House, but not Donald Trump. In fact, the former President of the United States held a rally in Alabama in August, the same way he did while he was still campaigning before his loss during the 2020 election. But this time he wasn’t fighting for his political survival, but instead had a new “Save America” campaign and seemingly tried to encourage his supporters in the Deep South to do something they’ve hesitated to do this year: get vaccinated against COVID-19. During the time, Alabama’s vaccination rate was last in the race to get states fully jabbed. Since then, the state’s rate has climbed to 38.3% of the eligible population fully vaccinated. While that’s progress, there’s still a lot of work to do, per AL.

During his rally, Trump told his supporters, “It’s good. I did it. Take the vaccines,” according to CNN. But when the crowd began jeering, the former POTUS was surprised that they were booing at him and not with him. He then doubled down with, “No, that’s OK. That’s all right. You got your freedoms. I just happened to take the vaccine.”

Seeing how Trump made at least one effort to encourage Alabamians to get vaccinated, some are surprised over a report that says he had private meetings with certain people who would think otherwise. Keep reading below to find out more. 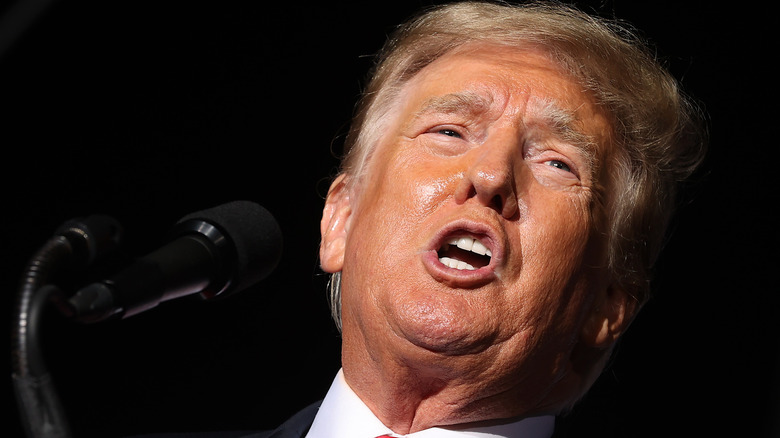 Soon after the vaccine began to roll out during the first quarter of 2021, Donald Trump made sure to take credit for its success, despite not being in office anymore. “In a certain way, I’m the father of the vaccine because I was the one that pushed it,” he told Fox News’ Maria Bartiromo in an interview, adding, “I pushed the FDA like they had never been pushed before… and that’s why we have it.”

And while there’s been some reported vaccine hesitancy from his party, according to Forbes, Trump’s message seems to differ compared to the guests he had at his New Jersey golf course over the summer. According to CNBC, Trump loyalists, along with people who opposed the mask and vaccine mandates, had private meetings with Trump at his National Golf Club in Bedminster, New Jersey, according to their social media posts. Some of them included House Minority Leader Kevin McCarthy, National Republican Senatorial Committee Chair Rick Scott, conservative YouTuber Austen Fletcher, and North Carolina Representative Madison Cawthorn, who was joined by Rogan O’Handley, a lawyer who has criticized COVID-19 vaccine mandates on his Instagram page in the past.

While no one knows the exact nature of Trump’s meetings with his loyalists and supposed anti-vaccine conspiracy theorists, there’s always the chance that he might have encouraged them to get their vaccine shots too. That is, before possibly getting booed out of the room.