40% of couples report arguing when playing Call of Duty together

Want your love to last? Don’t play Call of Duty! Nearly 40% of couples report arguing while competing against each either in the video game – and some men have thought about ending the relationship because of it

Lockdowns caused by COVID-19 have led many to pick up a controller, but all those hours gaming with your significant other could cause a strain in the relationship.

A survey found a quarter of UK couples have argued over games once or twice a week and about 12 percent said gaming-related fights happened 150 to 200 times a year.

The most common sources of strife were Call of Duty and the popular FIFA soccer franchise, which were both responsible for over a third of fights.

However, one in 50 couples admitted to rows over online gaming every single day, and some of the men have contemplating ending the relationship because of it.

One of the most popular games out there, Call of Duty is also the source of the most relationship strife: 38 percent of couples say they’ve argued over Activision’s first-person-shooter war game

According to their unofficial survey, 38 percent said Call of Duty caused their domestic disputes, followed closely by 34 percent who blamed FIFA.

While one in four couples who enjoy plugging in and playing say it hasn’t caused any problems, another 25 percent said they argue over gaming 50 to 100 times a year, or about once or twice a week. 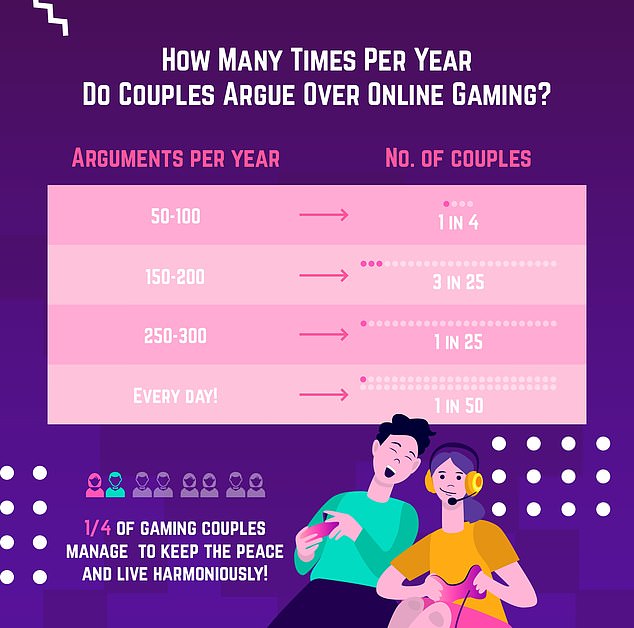 One in four couples say they argue about online gaming 50 to 100 times a year, or about once or twice a week. One in 50 say its a daily occurrence

One in 50, or 2 percent, admitted to arguing over online gaming every single day.

‘Being preoccupied with gaming will most likely let you forget what day it is, especially if you pull an all-nighter,’ said dating expert Chris Pleines.

‘Instead of preparing something special for your partner, you are busy leveling up on your game.’

Could fights over COD break a couple up? A quarter of men in the survey said they thought about ending their relationship over online gaming-related arguments, compared to 17 percent, or about one in six, of the women.

We can’t make any assumptions about who’s doing the playing, but there was a gender divide when it came to banning online gaming: A quarter of female respondents admitted they (unsuccessfully) tried to banish gaming in their homes, while a fifth of male respondents did.

‘When their female partners don’t understand their motivations, they take offense and get into serious arguments,’ Graveris told CardsChat. 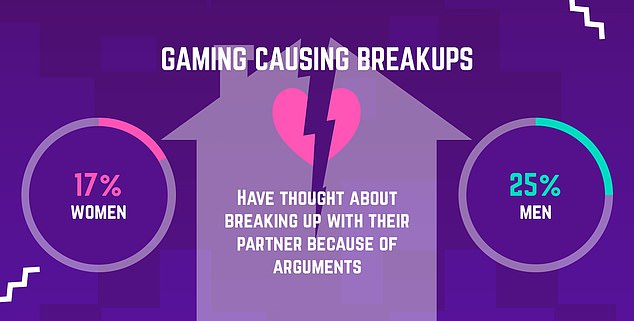 Sex educator Dainis Graveris said some men see gaming as a stress reliever or an outlet for negative energy. ‘When their female partners don’t understand their motivations, they take offense and get into serious arguments’

‘That’s why you can find that most of them get into serious fights with their partners and have thought about breaking up with them.’

The survey focused on couples in the UK, but we can assume the situation was similar in the United States, where 55 percent of people turned to gaming to relieve boredom and stress in the first phase of the pandemic.

Video games and interactive media generated $139 billion in 2020, according to SuperData, a 12 percent spike from the year before.

And, as in Britain, free games like Fortnite and Call of Duty: Warzone, were top choices— generating 78 percent of the total games revenue.

A separate report from Verizon determined that the amount of internet usage dedicated to playing video games rose by 75 percent during the first week of the nationwide shutdown.

Although video games could lead to a break up, another report found it can boost your moral.

In November, scientists reported that playing video games could actually have a positive impact on your wellbeing.

Researchers at the Oxford Internet Institute found that people who enjoyed playing Plants vs Zombies: Battle for Neighborville and Animal Crossing: New Horizons saw an improvement in their overall mental health.

‘Video games aren’t necessarily bad for your health,’ said Andrew Przybylski, director of research at the Oxford Internet Institute. ‘There are other psychological factors which have a significant effect on a person’s wellbeing.

‘In fact, play can be an activity that relates positively to people’s mental health – and regulating video games could withhold those benefits from players.’

And earlier last year, researchers reported playing violent video games such as Grand Theft Auto and Call of Duty did not make children more aggressive in the real world.