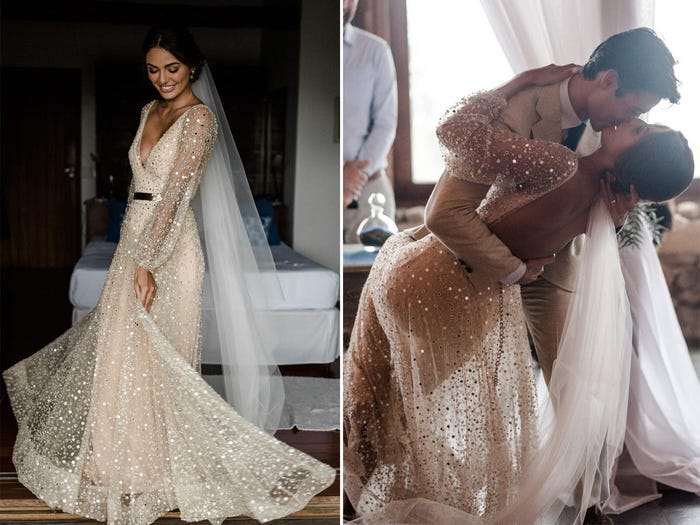 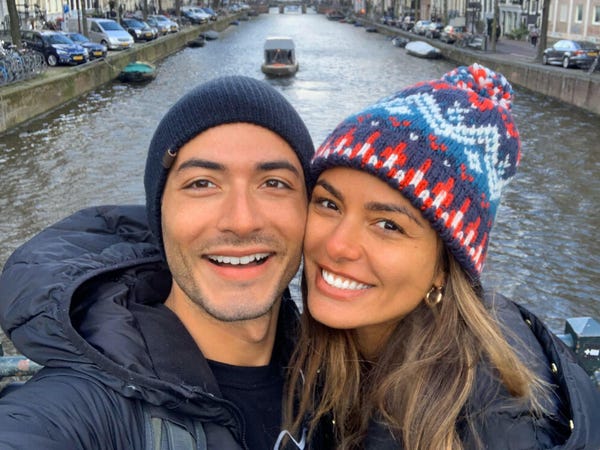 They've been together ever since and got engaged six years after they met. 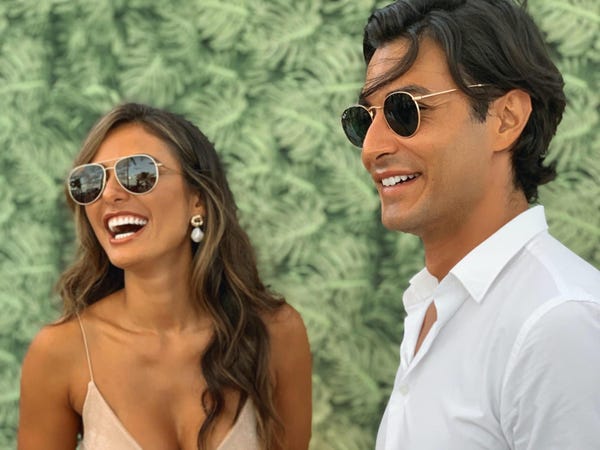 "We decided to get married more to celebrate the love," Lima said of why they tied the knot.

"We had been living together. We had the life together," she added. "It was just to have our friends and family to celebrate our union."

They got married in Praia do Rosa-SC, Brazil, surrounded by friends and family.

When it was time to look for a wedding dress, Lima knew exactly what she wanted. 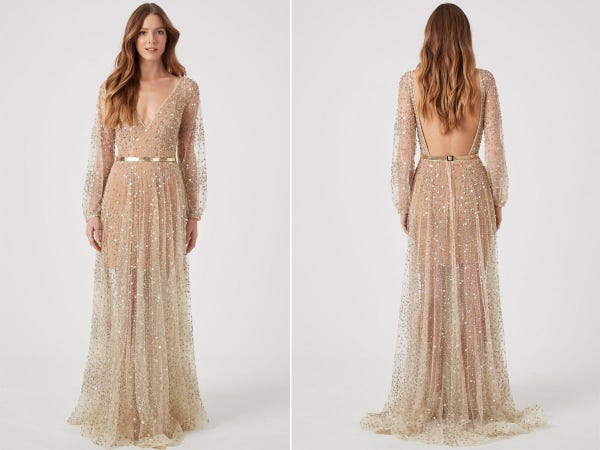 "I didn't go wedding dress hunting," Lima told Insider. "I found a dress on Pinterest, and it was just an editorial picture."

Lima added that the Pinterest photo she found didn't indicate the designer or brand.

The sheer, gold gown was made of tulle and covered in sparkles. A gold belt gave the dress shape, and it featured a low neckline and was backless as well.

After months of research, Lima was able to figure out that the dress was designed by Kyha Studios, an Australian bridal brand.

Lima ordered the dress without ever trying it on. 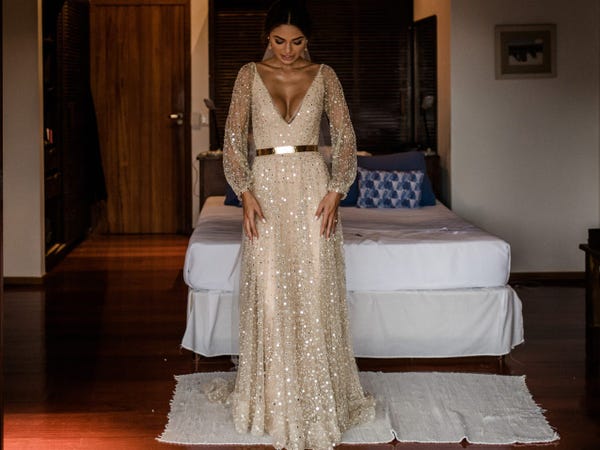 Lima ordered the dress from Kyha Studios as soon as she figured out it was the maker of the dress.

"I didn't even try any other wedding dress," Lima said. "My mind was on that one."

Because the dress is sheer, Lima wore a nude slip with it. 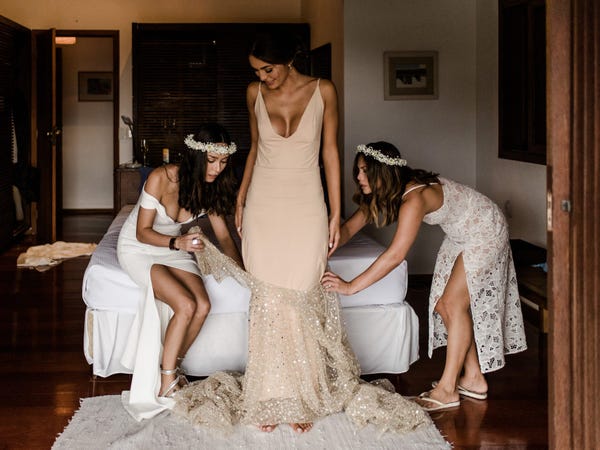 The dress can be worn with just nude underwear, but Lima didn't want it to be totally sheer.

The slip allowed the sleeves to be transparent while giving the bodice and skirt an underlay. 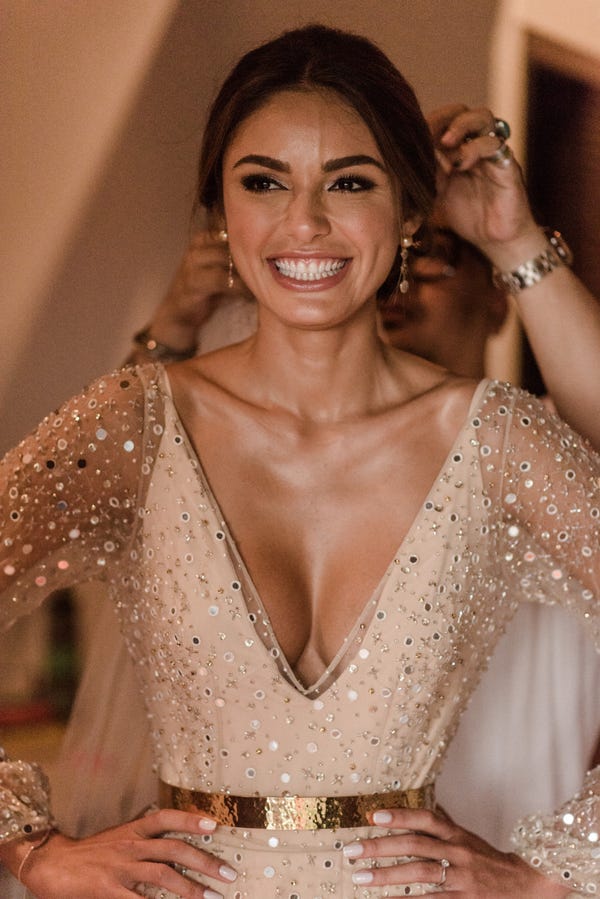 The Jewelmer earrings and metallic belt coordinated with the sparkles on Lima's dress.

Lima also paired the dress with a long veil. 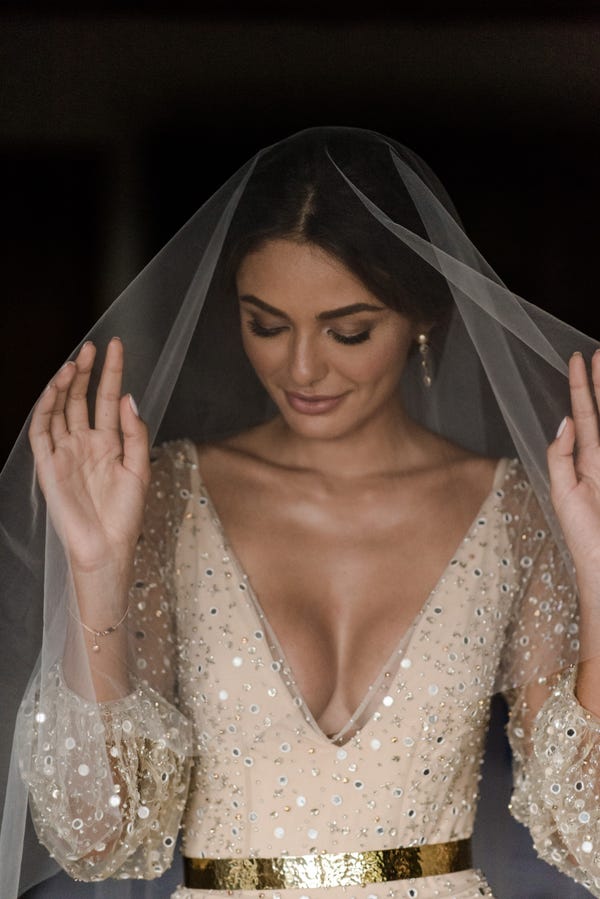 She purchased the veil from Khya Studios as well, which brought the total cost of her look to around $6,000.

Omar Ermita did the bride's makeup.

The back of the dress mirrored the front. 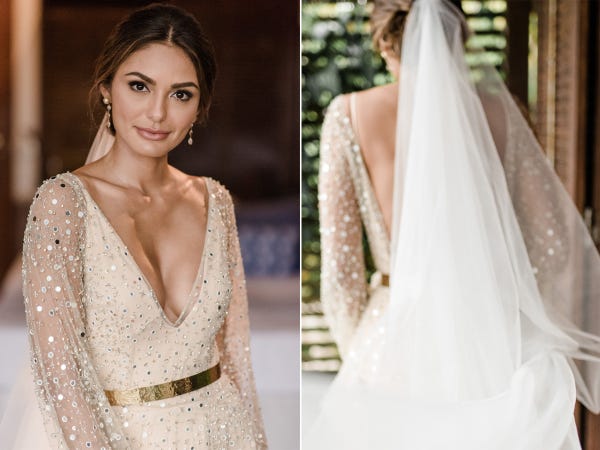 The dress had a V-shaped neckline in the front, and the back dipped low as well.

"The moment I saw it was just magical," Lima said of her dress. 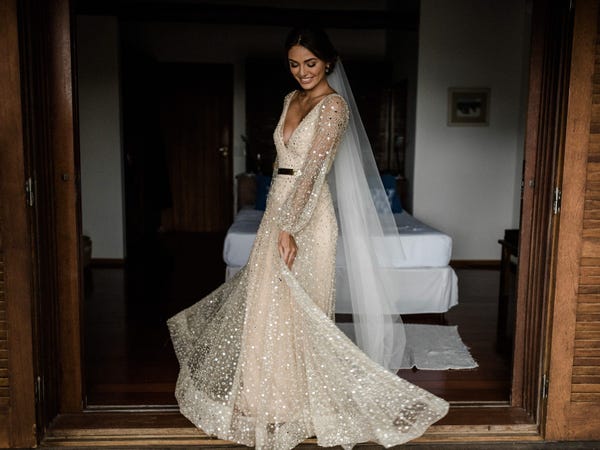 "It was just what I wanted," she said. "We were going to get married on the beach, so it just fit perfectly."

Lima and Costa were married at Vida Sol e Mar EcoResort in Brazil. 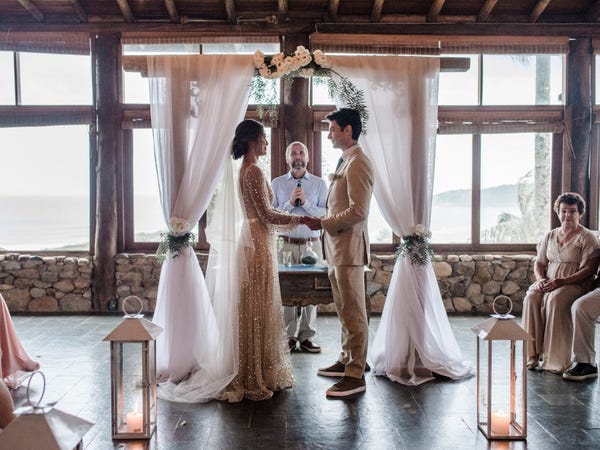 Casamenteiras do Rosa planned the wedding, while Juliana Kneipp was the photographer and Rafa Zardo Santana was the videographer.

Lima was emotional when she walked down the aisle. 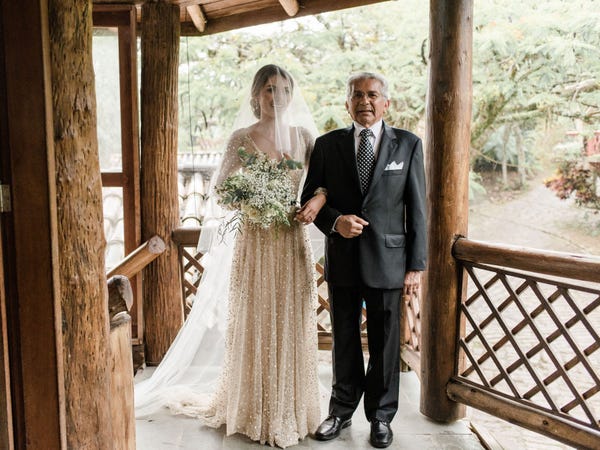 "I think the best part for me was walking down the aisle," Lima said of her ceremony.

"I really took the time to look into everyone's eyes and just see our family and friends that were there for 10 years," she added. "And they just cried so much."

Costa's grandparents brought the rings to the couple during the ceremony. 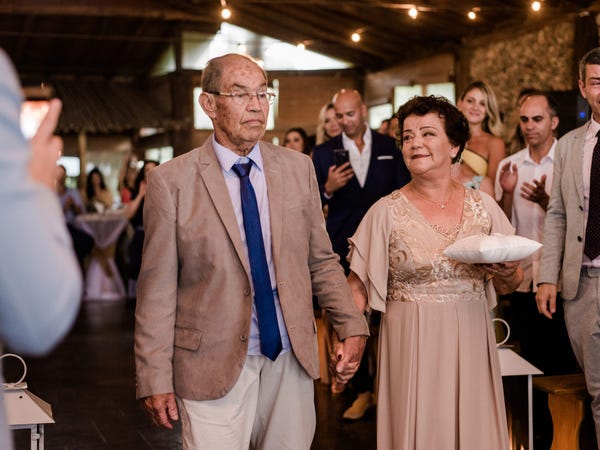 Costa's grandparents have been together for over 40 years. Lima and Costa felt it was symbolic for them to deliver the rings during the ceremony.

Costa's grandparents' involvement in the ceremony was meaningful to the couple. 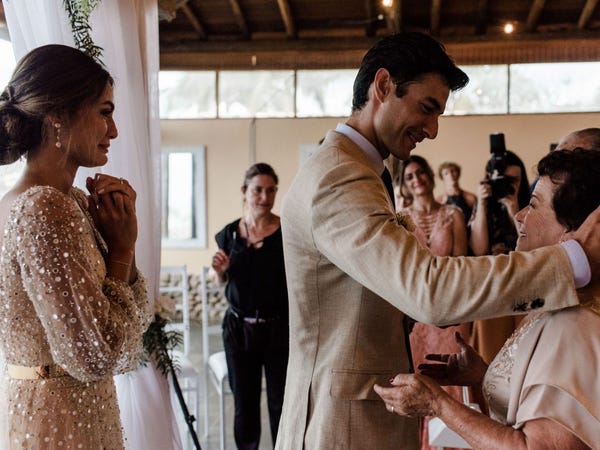 "I couldn't hold myself together," Lima said.

Costa's grandmother also gave a speech at the wedding.

Community was a big focus for the couple on their wedding day. 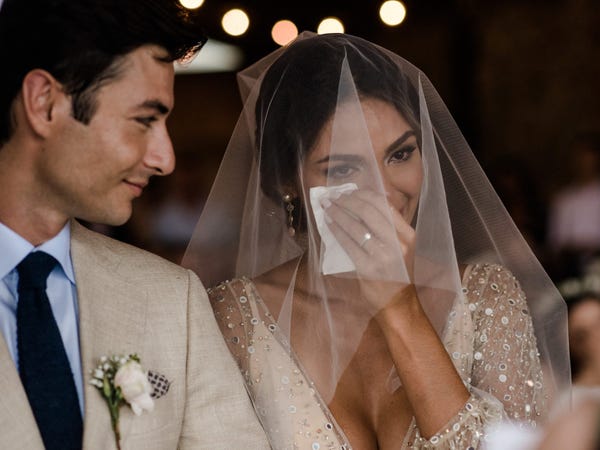 "Everyone was really connected," Lima told Insider of the couple's wedding day.

"We're not religious. We're spiritual and we believe in God, but in a different way," Lima said, adding that their officiant played a big role in creating a sense of community during their ceremony.

"We were all there to celebrate love, and all kinds of love, not just ours," Lima said. "It was magical."

Lima changed into a different dress for the reception. 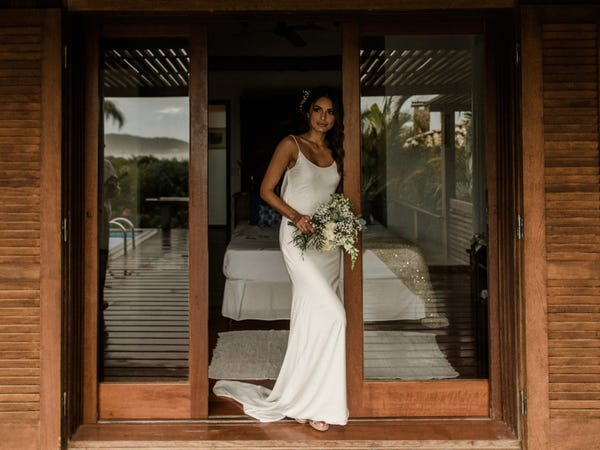 Lima wanted a more relaxed dress for her reception.

Lima's friend Jot Losa is a designer, and she created a dress that would make it easy for Lima to dance. She gave the gown to Lima as a wedding gift.

Lima's mom really wanted to see her in a white dress, so the second gown was a win-win.

The reception dress had a more sultry design than the ceremony gown. 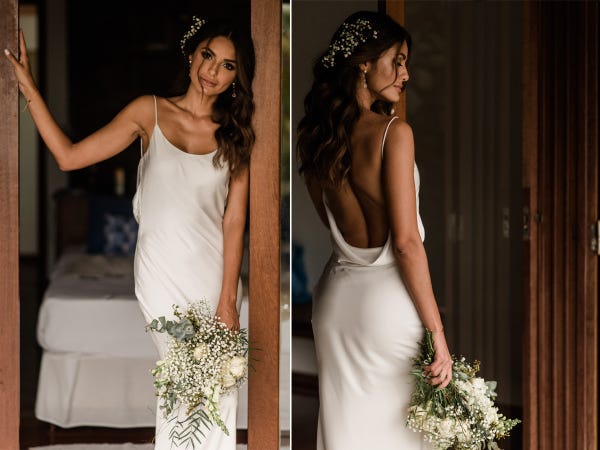 The dress was made of a silk material that clung to Lima's frame. Like the first dress, it was backless. Spaghetti straps held it up.

Lima took her hair down for the reception and used delicate flowers to pull it into a side sweep.

Even though they were different, Lima felt beautiful in both of her dresses. 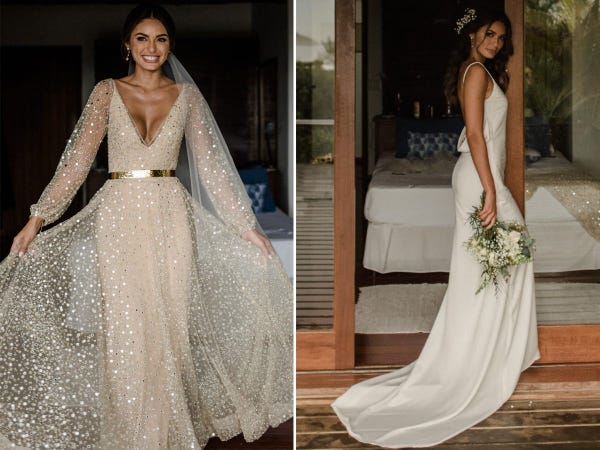 A big reason she liked both dresses is that they were comfortable.

She said the ceremony dress was a bit heavier because of the beading, so she was glad to have the sleeker dress to dance in. But she felt at ease in both gowns.

"I think you have to really know what you want because it's so easy to get lost," Lima said of shopping for a wedding dress. 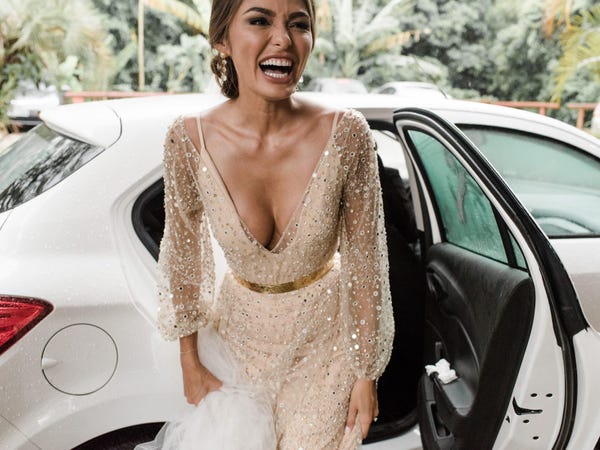 She said she saw friends try on dozens of dresses, and more options just made them more confused.

"It's better to envision first, and then you go and know what you want," she said.

"We're partners for life," Lima said of her relationship with Costa. 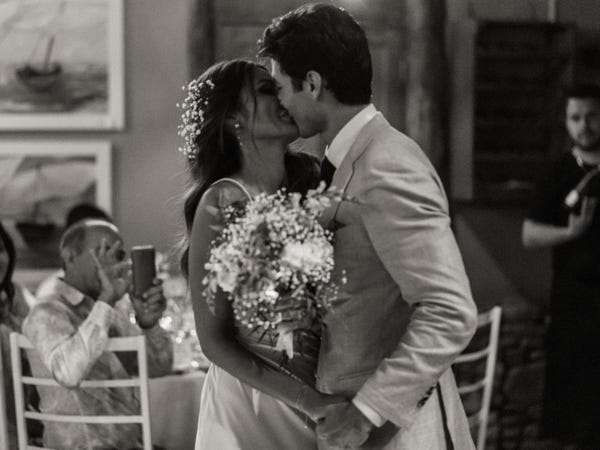 "We're partners for everything," she said. "For the good, for the bad."

"When I'm down, he's the one lifting me up, and the other way around," she added. "We really see our relationship as a team."

Lima and Costa are adding to their team soon, as she's pregnant with their first child. 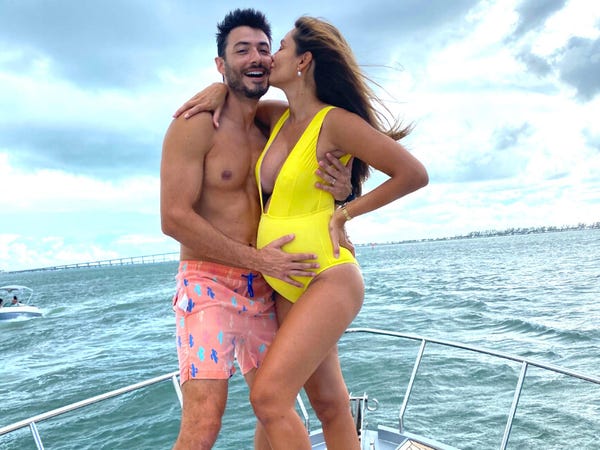 "It's a whole new chapter," she said.

"We're always there for each other," Lima said. 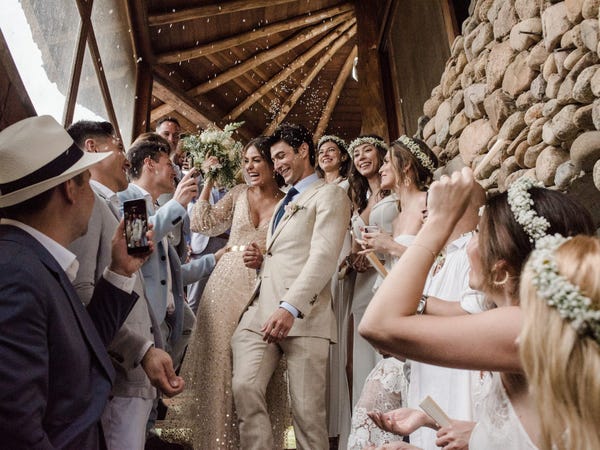 "I think that's what makes a difference in any relationship — when you can add to each other," she said.

You can follow Lima and Costa on Instagram, and you can see more of Kneipp's photography here.