Home » Lifestyle » A Florida Man Bought Anti-Quarantine Site Names To Try To Troll Conservatives. Now He’s Out $4,000 And The Target Of A Harassment Campaign.

A Florida Man Bought Anti-Quarantine Site Names To Try To Troll Conservatives. Now He’s Out $4,000 And The Target Of A Harassment Campaign. 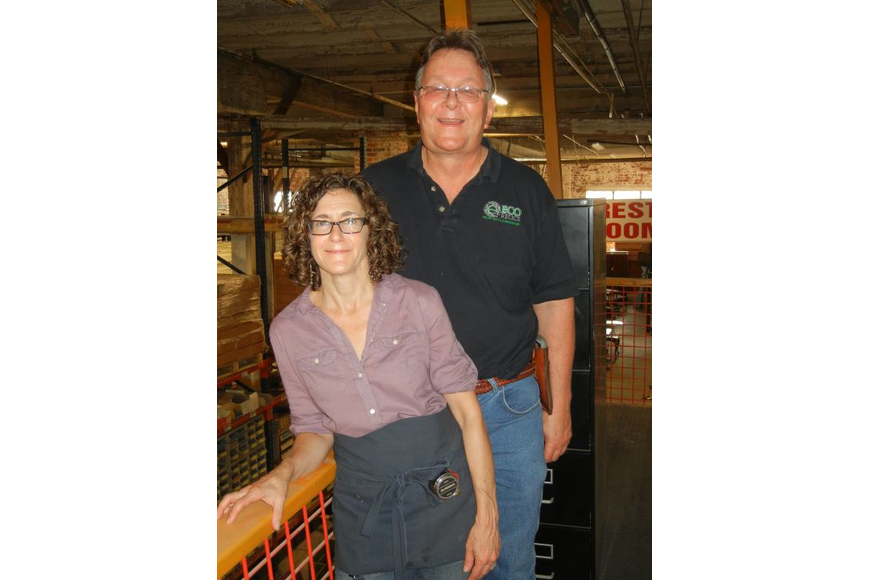 Michael and his wife, Ann Murphy.

Michael Murphy was up late last Thursday night when he said a Facebook post gave him a “harebrained” idea: buy up more than 200 anti-quarantine domain names to “hoodwink” conservative groups spearheading protests across the US and make a little cash reselling them to help supplement his flailing small architectural salvage business.

A week and $4,000 later, he hasn’t resold any — but he has become the target of threats and trolling led by people accusing him of astroturfing a right-wing crusade to reopen states prematurely during the coronavirus pandemic. And while a number of protest groups and sites have been created by conservative activists pushing agendas, Murphy said he actually hoped he could find progressive buyers for the URLs. He’s now trying to find TV host John Oliver’s number to convince him to take over the entire thing.

“I just get these bursts of adrenaline around 11 or 12 at night and go crazy, and this is one,” he said. “I get the most harebrained schemes at that time.”

BuzzFeed News first chatted with a distressed and befuddled Murphy Sunday afternoon, after a Reddit thread linking him to scores of “reopen” and “liberate” website URLs went viral. The 68-year-old from Jacksonville, Florida, said he was shocked that his spontaneous scheme led to him fearing for his life.

It all started around 10 p.m. on April 16, when Murphy, a former day trader who now runs an antiques and buildings supplies salvage business with his wife, was scrolling through Facebook. He saw a post from a friend in North Carolina asking why a random guy from Sebastian, Florida, owned a “reopenNC page.” The site sells T-shirts, car decals, and yard signs with slogans like “Facts Not Fear,” “Liberate2020,” and “Know Your Rights.” GoDaddy records show that the same person also registered reopenny.com and reopenmi.com, and Murphy’s friend learned about it from a local politician’s tweet.

That’s when Murphy said he got the idea to buy every other iteration of reopen(insert state here).com he could think of to “screw over” people who were copying anti-quarantine movements and hoping to organize protests in their own states. And Murphy figured he could make some extra cash at the same time.

“I bought every two letter abbreviation for states, all the old postal abbreviations, full state names,” he told BuzzFeed News Sunday evening. “I bought everything I could get my hands on. The next day, I bought all the ‘liberate’ ones.”

Over the past two weeks, anti-quarantine movements and protests have been popping up in states across the US, often born from large Facebook groups filled with Americans angry about how stay-at-home orders have sidelined their jobs and daily lives. Fueled by the president, who has been calling on Twitter for states to rise up and liberate themselves, anti-quarantine rallies have been organized by a mix of right-wing, anti-vaccine, pro-gun, and militia groups, and some have been supported by major conservative funders.

That’s not in line with Murphy’s political beliefs, which he described to BuzzFeed News as fairly liberal. But in a mad rush, for nearly 10 hours, he loaded URL names like reopenmaine.com, reopenky.com, liberatewyoming.com into his cart, sometimes 40 at a time. When he would go to check out, he said a lot of the names would already be taken since “everyone was snapping them up really quickly.” 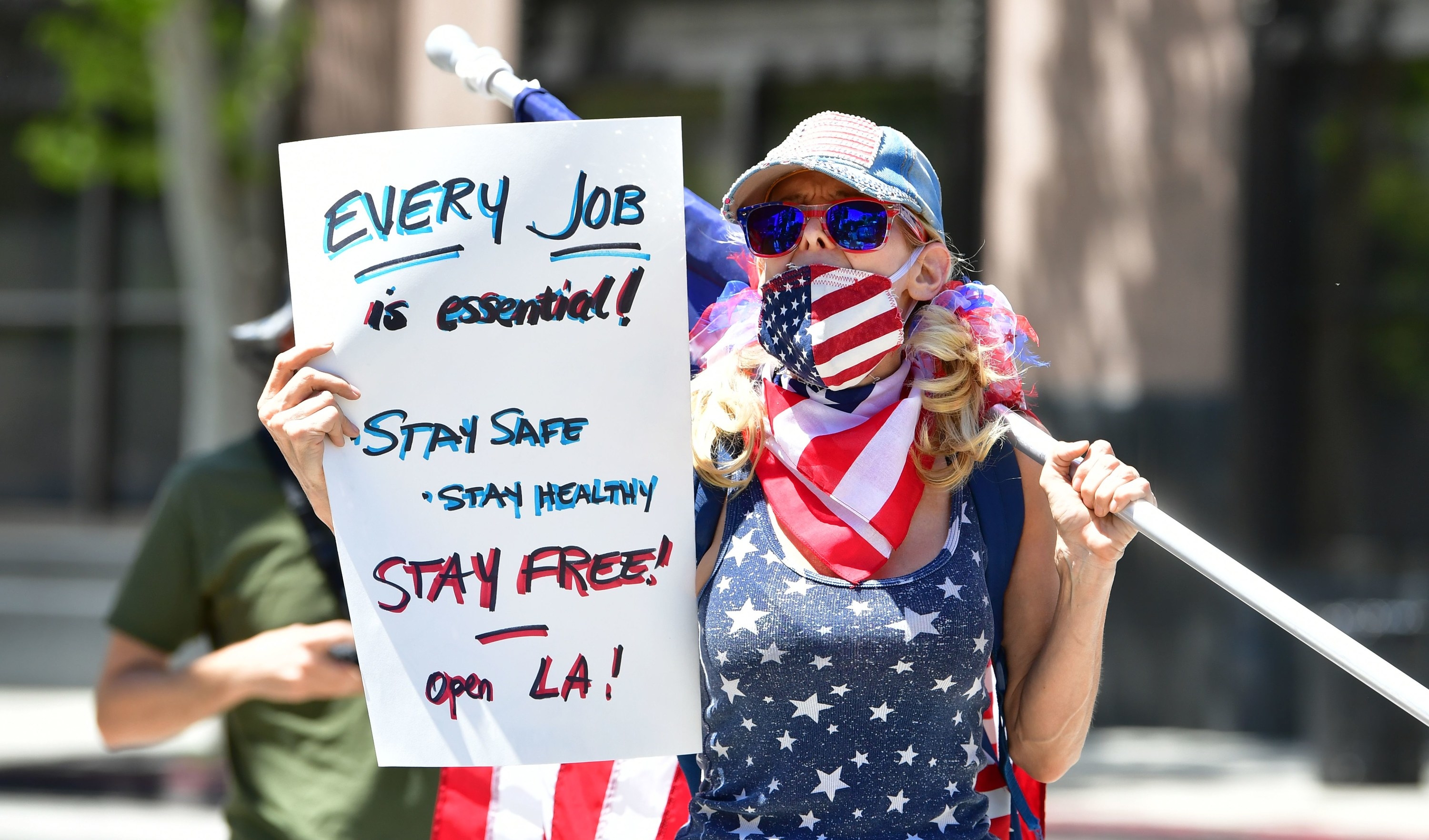 At the end of his “fast and furious” marathon spree, he owned 203 website names and had racked up more than $4,000 on his credit card. Murphy sent BuzzFeed News screenshots of his GoDaddy account showing pages of the domain names he had purchased, as well as bank statements confirming the charges.

It’s an expense he says he can’t really afford right now, and it’s not the first time he’s recently tried to get creative to bring in money to keep his company running, pay his 17 employees, and cover his bills. Last month, Murphy hustled to source wood-drying machines, touting their ability to sterilize N95 masks, to hospitals and cities, but that venture fell flat.

With sales at his company, Eco Relics, down 60%, he said he’s also tried to apply for a variety of small business loans, but none have come through.

Some of the domain names Murphy purchased.

On April 18, Murphy started getting emails and calls accusing him of “astroturfing” anti-quarantine movements across the country. “No, we don’t sell astroturf here,” he said he told one caller, perplexed. Then, in a matter of hours, he was bombarded by a flood of harassing messages, death threats, and vitriolic Facebook comments.

He learned that a Reddit thread that had quickly gone viral linked Murphy to scores of domain names associated with the reopen movements. The post claimed he owned several major sites, such as reopenpa.com and reopenmn.com, which redirect to gun rights groups connected to the Dorr brothers, a prominent family of Second Amendment extremists. Murphy said he doesn’t own reopenpa.com and reopenmn.com, and those URLs were not listed in the GoDaddy records he provided to BuzzFeed News. The Pennsylvania Firearms Association and Minnesota Gun Rights — the sites the URLs redirect to — did not respond to questions from BuzzFeed News.

“Everything went crazy so fast,” Murphy said. “It’s like the Wild West on steroids.”

His phone would not stop ringing, he said, and his Eco Relics inbox began to overflow with emails. “Michael Murphy or Ann if you’re reading this. Your political project has been discovered. You have been judged and found wanting. We are legion. PS How do you like living at..,” listing his home address, according to emails forwarded to BuzzFeed News.

Strangers accused him of having a “Nazi son” who lives in Brazil (Murphy doesn’t have a son) and a Republican lobbyist father (his dad, a salesperson, died 20 years ago), and someone hacked Eco Relics’ Facebook page, changing it to some type of “unintelligible language,” Murphy said. They also threatened to show up at the company’s warehouse and protest, calling for boycotts and “justice,” one email said.

“Not only do I have the coronavirus impacting my business, but my employees have to worry about this crazy stuff and they’re afraid for their lives,” he said. “It’s a double burn on my employees, myself, my wife, who is losing her mind, everybody.”

And a week since he first began buying URLs, he’s still 0 for 203 for reselling them and pretty shocked that no one is interested in obtaining ownership of the whole fleet.

“I am really flummoxed about why nothing has happened,” he said.

Although his wife, Ann, is used to his “chicanery” by now — like the one time he tried to start a reality TV show — Murphy said domain names endeavor has been “the worst,” causing anxiety attacks and taking time and attention away from their efforts to get federal help to keep their salvage business alive.

“If we don’t get this money, I don’t know what we’re going to do,” Murphy sighed. “I took the government at their word to keep our employees and they will help us.”

But even after all the stress, he acknowledged this probably won’t be his last spur-of-the-moment scheme.

“I am too old to change. My wife always says I’m just one crazy thing after the other,” he laughed Thursday morning. “And what good is life if it’s not crazy?”