Anastasiia and Gunther were on the lookout for a restoration project in December 2016. When the young Maryland couple saw a for-sale sign in front of an old church up the road from their house, they stopped the car and looked inside.

Now the couple and their three children live in the 120-year-old All Saints' Church. While they're actively renovating it, it maintains many of its original details.

What is now called All Saints House was deconsecrated in the 1970s, Anastasiia told Business Insider. Since then, it has seen three separate owners (not including Anastasiia and Gunther) who have added lofts, rooms, skylights, and bathrooms.

The couple said that when they bought the home, it was livable but had sat empty for years and needed some fine-tuning.

So far, their completed renovation projects include the stripping of dangerous lead paint from the front door, adding a breakfast bar in the kitchen, redesigning the master bedroom, and renovating the kitchen.

They're still chipping away at their long list of restoration projects, even during the pandemic. Their most recent projects include planting a garden and putting in a new AC unit. They're currently building a trellis and planning out other more involved renovation projects. They document all their progress on Instagram.

Their home, which they've spent almost $60,000 renovating, sits in a booming market. Buyers are outnumbering sellers in most parts of the country, including Maryland, meaning it should be easy for the couple to sell the house amid the pandemic.

Buyers in the area are "willing to pay more for a house than I've ever seen — I'm talking $30,000 to $50,000 over the listing price," one Baltimore real-estate agent told Redfin recently. "They're desperate because homes are flying off the market so quickly. I'm selling all of the homes I'm listing within three days."

Business Insider caught up with Anastasiia to find out what it's like to live in a house with over a century of history that could be easily flipped for a profit. 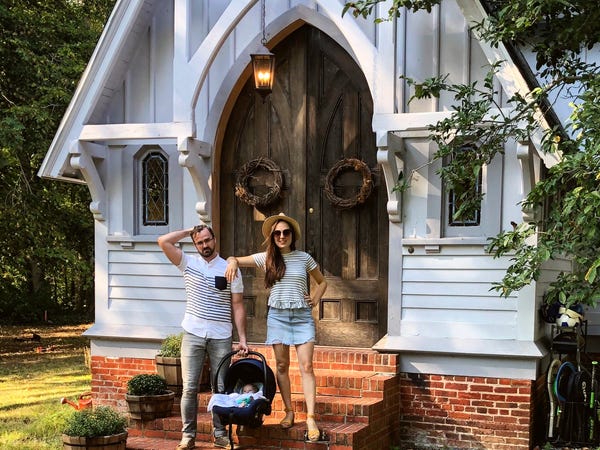 Anastasiia told Business Insider that she and her husband had been on the lookout for an old house to restore. So when they saw a for-sale sign in front of an old church up the road from their house, they immediately went inside.

"The moment we walked in, that was it. It was love at first sight," she said. "We looked at each other and said, 'Yes, we definitely want to live here,' and called our real-estate agent."

Anastasiia, a teacher, and Gunther, a biostatistician, have always shared a love of old houses and follow restoration projects on social media.

"We are part of a growing Instagram community of old-house lovers and people who restore old houses," Anastasiia told Business Insider. "So we have a lot of friends on Instagram that we get great ideas from and ask for advice."

According to the Maryland government's website, the church was designed by a New York architect, Henry Martyn Congdon, nearly 120 years ago. It was built to replace a church, also designed by Congdon, that burned down on December 31, 1899. 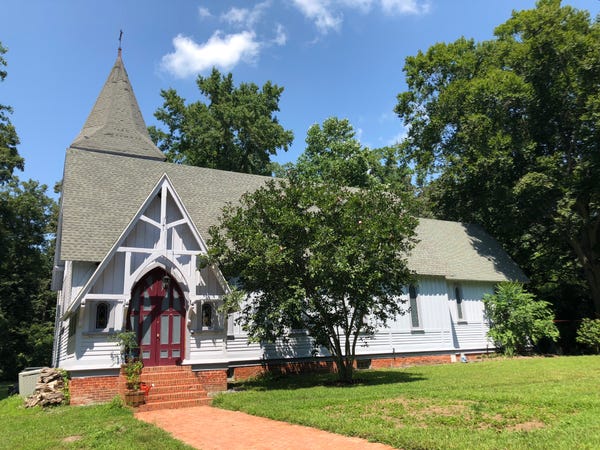 According to Anastasiia, All Saints' Church served as a place of worship in Maryland until the 1950s and remained empty until it was deconsecrated in the 1970s. Since then, it has seen a handful of owners who have added lofts, rooms, and bathrooms.

"The changes that were made to the building are not permanent," she told Business Insider. "You can take down everything that's been put up, and it can be a functioning church again."

Despite the additions, the building's original Gothic-revival architecture has been preserved for nearly 120 years. To this day, the church features original finishes.

In fact, the home's stained-glass windows were imported from Munich at the turn of the century. As soon as the couple bought the church, they began chipping away at their long list of restoration projects.

The first task was to clean the house from top to bottom, which took about two weeks, Anastasiia told Business Insider.

Anastasiia told Business Insider that she and Gunther completed the projects on their own, with the help of YouTube tutorials. The renovated kitchen is the biggest project they've done so far. 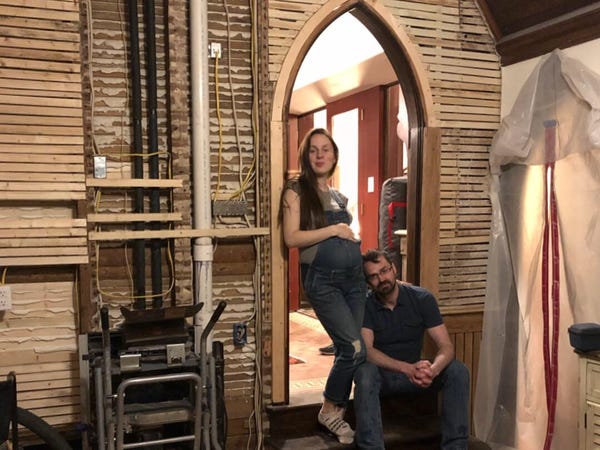 The three-month kitchen renovation included redoing the flooring and replacing the joists, updating the plumbing and electrical work, and installing new cabinets and countertops. 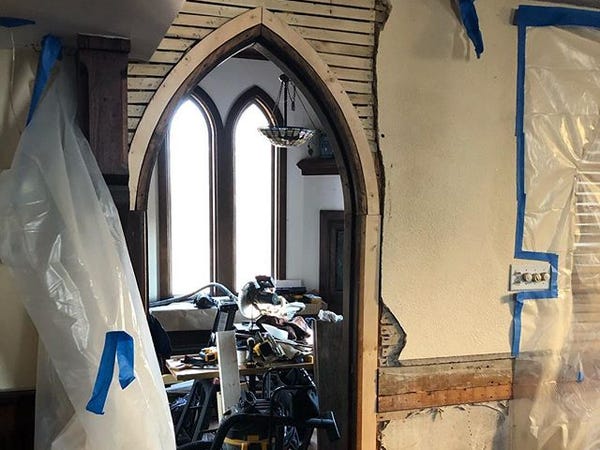 Anastasiia told Business Insider that the hardest part of the entire restoration process was making sure the additions complement the church's original style. "We try to keep everything as original as possible, as the owners prior to us did," she said. "We don't want to change anything that would damage the architectural integrity of the building." But preserving the building's architectural integrity doesn't come without its challenges. Anastasiia said the ceilings in the home's great hall are 25 feet tall, making it difficult to change lightbulbs and clean the wooden beams. 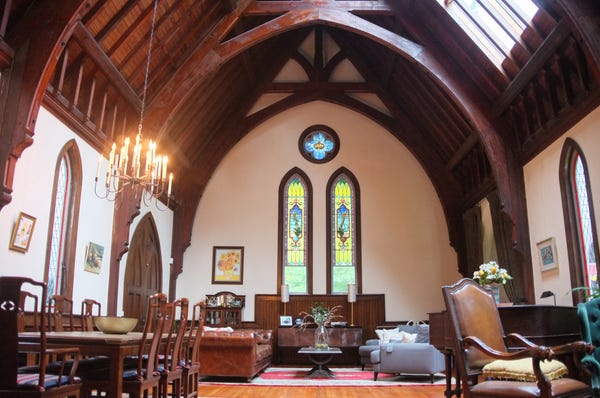 Anastasiia told Business Insider that the entire house is about 2,500 square feet.

When it came to decorating, Anastasiia and Gunther had to buy new furniture because what they had was too small. To better understand just how big the space is, the brown couch featured below is 12 feet long. 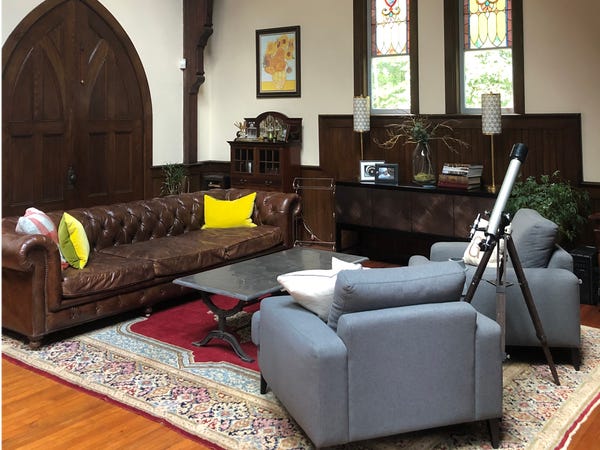 To find the perfect pieces, they shopped mostly at antique and thrift shops.

The grand piano, which was originally a church piano, sits next to the fireplace. Anastasiia said it dates back to the beginning of the 20th century. 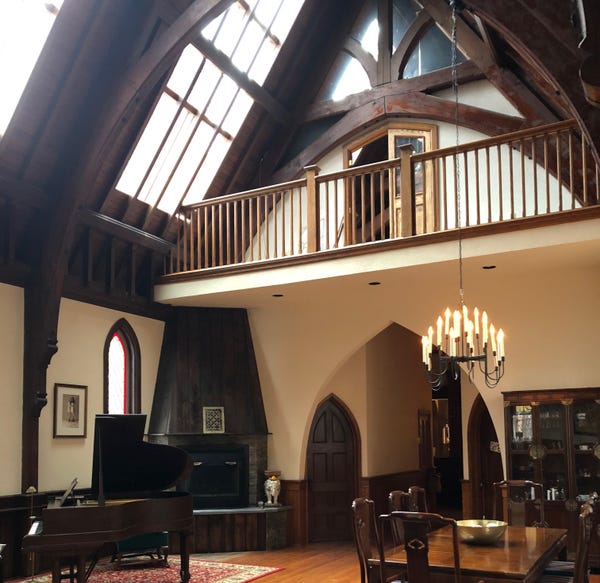 There are three bedrooms and two bathrooms in the home. The loft, which looks out over the great room, serves as the master bedroom. 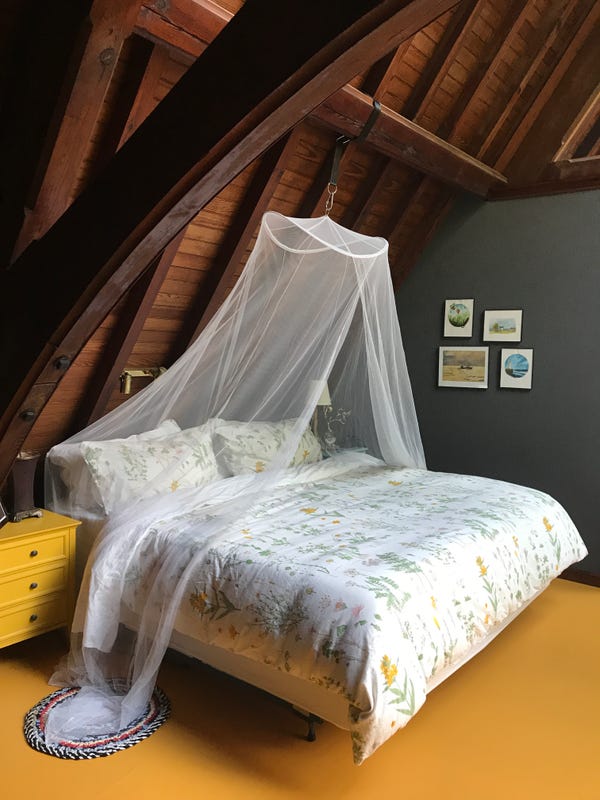 One of the home's three skylights covers almost an entire side of the master bedroom. 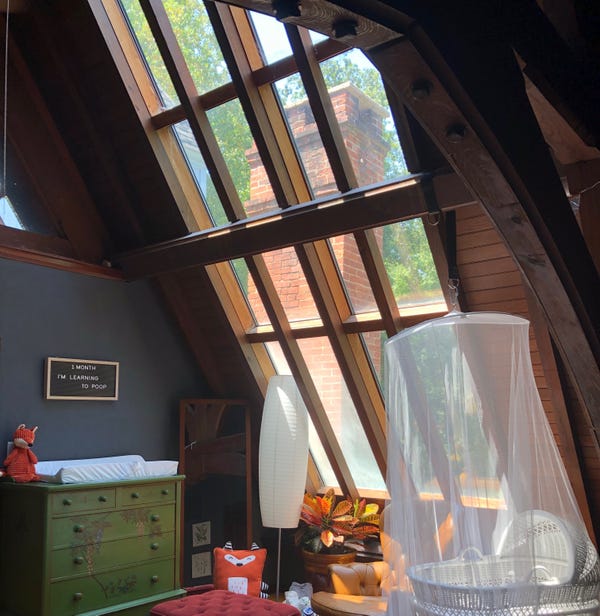 Directly under the loft area are the two other bedrooms. 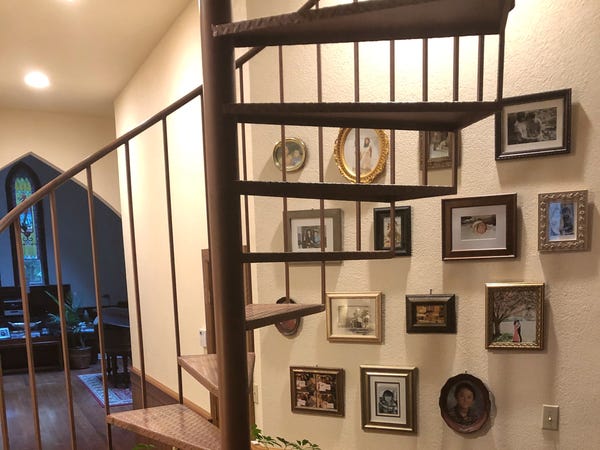 Anastasiia told Business Insider that during the colder months, her family spends a lot of time in this small, cozy living room, which was originally an altar. 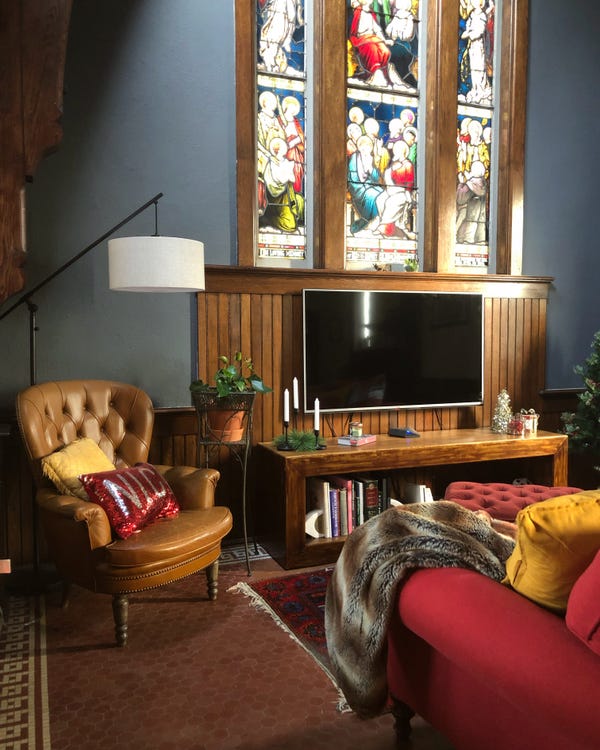 The great hall doesn't have heat, so during the colder months, Anastasiia and her family hang out in the small living room, she told Business Insider. In fact, in an Instagram caption, she called it the second-most-used space in the house, next to the kitchen.

The belfry — the tower attached to the church — has three levels. The top level still features a bronze church bell from the 1900s, Anastasiia told Business Insider. 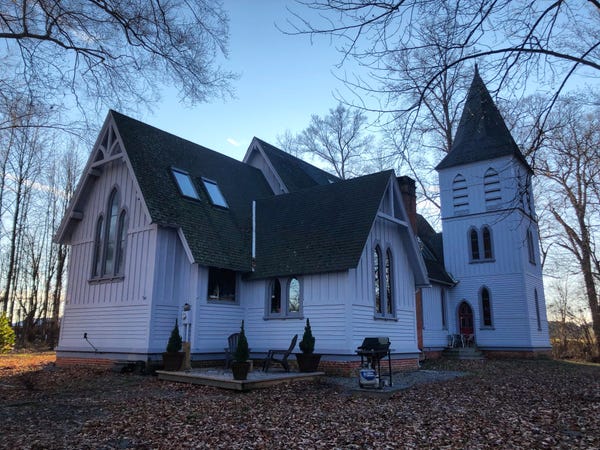 The first floor of the tower is usually a library, but the couple recently (and temporarily) converted it into a guest bedroom. The couple has big plans for the tower.

The second floor will be transformed into a Victorian-style bedroom that the couple hopes to share with others through Airbnb.

As for the third level, Anastasiia plans to transform it into a lounging area with floor-to-ceiling windows.

The bronze bell will be removed from the tower and displayed elsewhere on the property.

Behind the house is an old cemetery. While they don't own it, the family takes care of it by maintaining the land and doing some of the gardening, Anastasiia told Business Insider. 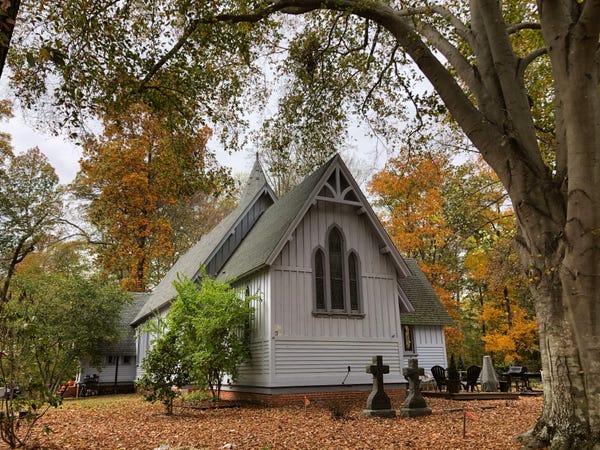 Anastasiia said she believes the best part of owning and restoring the old church is the inspiration and creativity it fuels. 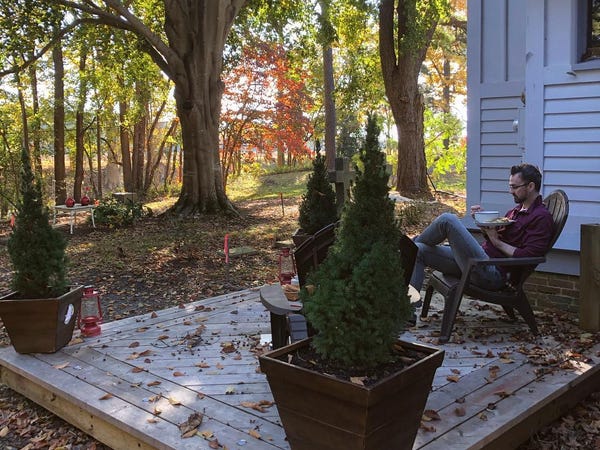 During the pandemic, they've planted a garden and are now working on building a trellis. They're also continuing to plan out other larger renovation projects for the home.

"My husband always says that we're just stewards of this place," she said. "This place has been here for over 100 years, and it will be here long after we are gone. Our job is not to just make it what we want, but to make sure we preserve it." 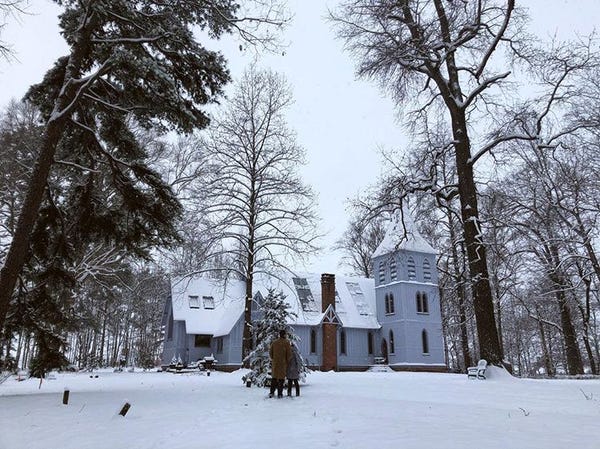 This article is part of Business Insider's ongoing series, How I Renovated It, where we talk to homeowners around the country about the process, budget, and transformation that goes into a renovation.