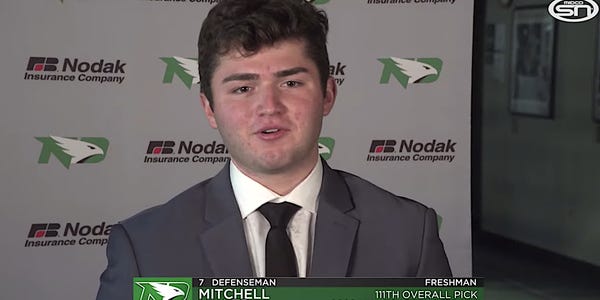 On Thursday, the Arizona Coyotes renounced the draft rights to Mitchell Miller, their 18-year-old fourth-round draft pick, over a past bullying incident.

As first reported by The Arizona Republic's Craig Harris and Jose M. Romero on October 26, Miller had a history of bullying and assaulting Isaiah Meyer-Crothers, a Black classmate with developmental disabilities.

Meyer-Crothers also told The Arizona Republic that Miller had called him the "N-word," which other classmates confirmed, according to a police report, and frequently hit him.

NHL teams were aware of Miller's past. Coyotes General Manager Bill Armstrong, who was not involved in the drafting of Miller, told the Arizona Republic that Miller had sent a letter to all 31 teams detailing his past and expressing remorse.

According to The Athletic's Aaron Portzline, "at least" 10 teams had taken Miller off their draft lists upon learning of his background. Portzline reported that some teams who had met with Miller via video calls during the pre-draft process felt "unconvinced of his remorse."

One NHL team executive told Portzline: "Based on hockey alone, he's a player that 31 teams would have drafted. We just decided we weren't going to draft him. It wasn't worth it on so many fronts."

The Athletic obtained a copy of Miller's pre-draft letter, in which Miller said he had been able to move past the incident with the help of court-assigned community service, counseling, and volunteer work.

"I'm a different person than I was four years ago, and I am thankful to have learned a very painful and valuable lesson," the letter read.

Miller also released a statement after The Arizona Republic's report, saying he had learned the incident's seriousness over the four years.

"I am extremely sorry about the bullying incident that occurred in 2016 while I was in eighth grade. I was young, immature, and feel terrible about my actions. At the time, I did not understand the gravity of my actions and how they can affect other people. I have issued an apology to the family for my behavior, completed cultural diversity and sensitivity training, and volunteered within my community with organizations such as Little Miracles," he said.

"Over the past four years, I have had a lot of time to reflect and grow, and I am very grateful to the Arizona Coyotes for taking a chance on me. I promise not to let them down. Moving forward, I want to be a leader for this cause and help end bullying and racism," he said.

However, the Meyer-Crothers family told Portzline that Miller had never reached out to the family to apologize directly to Isaiah.

The Coyotes initially defended the decision to draft Miller, saying they wanted to help him learn from the incident.

Coyotes CEO and team president Xavier Gutierrez said that after reviewing the incident and learning more about Miller's past, the team decided to renounce his draft rights, saying he didn't align with the team's culture.

Miller is committed to play at the University of North Dakota this season. At the time of the Arizona Republic story, the school had said it planned to keep Miller and try to "assist him in his continuing growth as a human being."