‘A total mess’: Politicians call for cleanout of corporate regulator

The acting head of the corporate watchdog doesn't understand why a payment to cover its chairman's tax bill blew out more than 12 times from what was initially agreed to more than $118,000.

Australian Securities and Investments Commission chairman James Shipton has now repaid almost all of the amount the corporate regulator stumped up to cover his 2017 and 2018 tax expenses relating to his relocation from the United States. He is currently stood aside on paid leave. 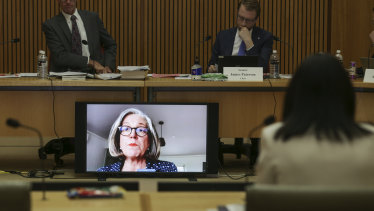 His deputy chair, Daniel Crennan, who resigned on Monday, has repaid $69,621 in rental expenses relating to a move from Melbourne to Sydney in early 2019 that was found to be above the remuneration package allowed.

"Do these things seem like reasonable expenses to be met by the public for the senior corporate regulator?" Labor senator Jenny McAllister asked acting ASIC chair Karen Chester in a Senate estimates hearing.

"My short answer would be no," Ms Chester replied.

Former intelligence inspector-general Vivienne Thom is reviewing the matter and is expected to report by the end of the year. The terms of reference for that review have been finalised but are not yet public.

Ms Chester and ASIC's other three commissioners only found out full details of the expenses issues just over a month ago.

"In looking at the documents that we have access to within ASIC, there was not what we would consider to be adequate documentation around clear, hard budgets, global budgets for the relocation for the chair," she told a Senate estimates committee.

Asked what changed between when ASIC initially said it would cover $9500 of Mr Shipton's tax bill and when it ended up paying the full $118,557, Ms Chester said she didn't have "a full understanding of the rationale for that decision" and had only "seen a couple of emails" relating to it.

The auditor-general raised concerns relating to the rental payments for Mr Crennan in August 2019 but the deputy chair didn't ask the payments to stop being made until ASIC received final legal advice this year.

Liberal senator James Paterson said it shouldn't have been up to Mr Crennan to ask for those payments to stop, asking why they weren't halted when the audit office flagged an issue. But Ms Chester said that was "a question that should be put to Mr Shipton".

"ASIC's leadership structure is a total mess and it is totally incapable of addressing what should be an absolutely basic requirement of any regulator, which is to have your own house in order," Senator Paterson said.

Ms Chester accepted that what had happened would damage ASIC's reputation and standing with the business community.

"We said to staff, 'it's going to be a bumpy road for the next while, we need your support, we have very important work to do and we'll continue doing it together'," she said.

"At a time when corporate Australia needs the corporate cop to be playing grand final football, they are on the bottom of the ladder," he said.