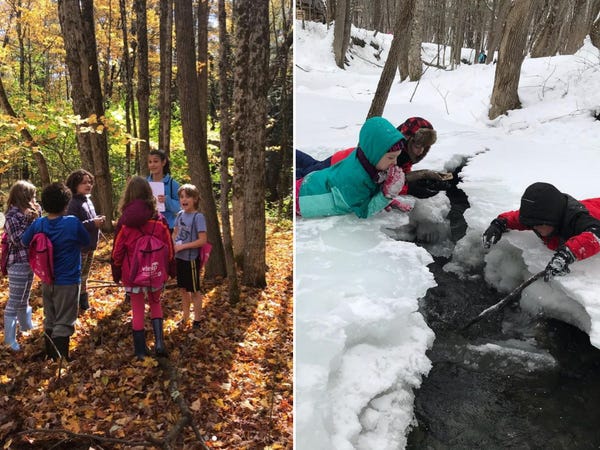 For the past three years, Nicolette Raney's third-grade classroom eagerly waited for Wednesday in the woods or Tuesday in the trees.

This year, her students won't have to wait. Raney plans to teach all five days of the academic week in the school's neighboring woods.

Raney, 34, is a teacher at Dothan Brook School in Hartford, Vermont. Her school administration decided to allow elementary students back into the classroom this year; however, a few grade levels are adding outdoor components.

First and second-grade students will spend part of each day outside, while the school's 29 in-person third-graders will spend their entire day in the forest.

"It's one of those things that, especially with elementary school, we desperately want to work with our kids face-to-face, but we just want to make sure it's safe for ourselves and our own families," Raney, who is going into her 13th year of teaching, told Insider. "So it's finding that balance."

More schools across the country are starting to consider moving outdoors to allow for social distancing and greater airflow, but Raney has been well aware of the benefits of learning outside for a while now.

This will be Raney's fourth year teaching outdoors, but her first year fully outside. Three years ago, Raney decided to incentivize her students with extra recess. One day, instead of heading to the playground for their reward, she took her students a little farther into the school's forest area.

Third grade is getting closer to our reopening date and we couldn’t be more excited. This year each student’s sit spot will include a hammock! We hope the forest will provide a sense of calm and wonder for all of our students. #outdoorclassroom #placebasededucation #getoutside #covidstyleteaching

"As soon as we were there, we were hooked," she said.

The forest organically became part of the classroom's routine. Tuesdays in the trees, Wednesdays in the woods, and forest Fridays quickly became the students' favorite days of the week.

The students will learn outside in the rain, snow, and sunshine

As students in Vermont head back to their classrooms on September 8, Raney said they'll start indoors with some technical training, which will prepare students if classes are moved online.

Once the training is over, third-grade students can expect to spend the rest of the school year outdoors.

Raney and her fellow third-grade teacher will both have indoor classrooms in case there's lightning or other dangerous weather, but Raney said she's hoping to use that space as little as possible.

In the winter, students will bundle up and stay warm by a fire. In the rain, kids will wear boots and rain jackets. In the sun, they'll lather up on sunscreen.

Raney pointed to valuable lessons that can be learned in the outdoors. Last year, students learned angles by throwing a snowball and watching the arc. They also worked with local scientists to identify plants, animals, and insects in the forest.

They'll even learn valuable life lessons, including that "it's OK to get dirty and muddy and be sweaty," Raney said.

The teacher shared how the outdoors create a sense of peace

There's an array of research pointing to the benefits students receive when they learn and play outdoors, and Raney has seen many of those advantages firsthand.

"It has been phenomenal," Raney said, adding that the lack of restrictions outdoors has helped students who tend to have difficulties inside the classroom.

Whether it fosters engagement or enhanced achievement, it's clear that the natural world provides benefits to children.

Raney said that her students gain a sense of calmness and peace when they're outside — something even more important given today's circumstances.

"To give them this safe and comfortable space to learn and to feel a sense of calm and belonging in such an unpredictable time is really fortunate," she said.

Instead of school supplies, Raney and the other third-grade teacher asked family members to donate hammocks this year.

Within 48 hours, the teachers had all 40 hammocks they needed to enhance the outdoor space.

Students will be able to read, learn, and relax from their hammocks, which will be spaced out so that students will have the option to take off their masks.

"If you can imagine, when we venture out and go to our space, every child in the third grade will have a safe space, not feeling confined, where they can take their mask off to do their journaling, to do their reading, and to just be a kid," Raney said.

While creating the space isn't costly, finding the land can be the biggest challenge

If Raney doesn't factor in the donated hammocks, her entire classroom took less than $50 to build. Her students will sit on tree stumps, which were free, and she's using an old whiteboard that was gifted by her mother-in-law. Her only cost was a tarp and some plywood.

For teachers considering an outdoor space, Raney's advice is simple: "Go for it."

She recommends starting small and expanding the students' outside area as they earn more privileges. She also added that there's plenty of existing research on how to create healthy outdoor classrooms.

"It's really as simple as it might seem sometimes," she said. "There's no hidden big plan or rule behind it. Nature truly can speak for itself and will provide such great opportunities for learning and growth."

However, Raney acknowledged how lucky her school is to have the space for outdoor classes, which has been one of the biggest challenges for schools located in urban areas. Dothan Brook School sits on a small plot of land in central Vermont, but it backs up against forested property that the owner is willing to share.

"I'm fortunate enough to teach them there," she said. "But that's definitely their space."

If you're a teacher, student, or parent who wants to share their story on what it's like to go back to school right now, get in touch at [email protected].