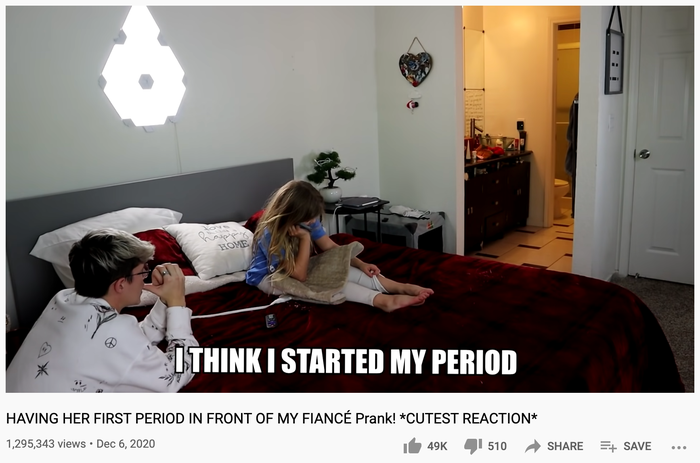 Children are YouTube's most profitable, popular stars, but the behavior exhibited by family vlog channels — from a couple "rehoming" their adopted child to YouTube parents accused of child abuse — has often provoked outrage. A young YouTube couple sparked a new wave of backlash against family channels and "child exploitation" this weekend after their "period prank" video was hounded by critics.

Ryan Ploof and his fiancée Danielle are two 21-year-old YouTubers who run the joint channel "Ryan and Danielle." Their channel has nearly 700,000 subscribers. On December 6, the two uploaded a video featuring Danielle's 7-year-old niece pretending to get her first period in front of Ploof.

The video's title, "HAVING HER FIRST PERIOD IN FRONT OF MY FIANCÉ Prank! *CUTEST REACTION*," as well as the video's thumbnail of the girl lying on the bed, pretending to experience period cramps as Ploof leaned over her, became the target of Twitter outrage.

Some of the video's critics referred to it as "child exploitation." The young girl in the video has appeared elsewhere on the couple's channel, including in their most-watched video, when Danielle "pranks" Ploof into thinking that her 7-year-old niece is actually her own daughter. That video has more than 7 million views. Both videos were well-received on YouTube itself, where the videos have a positive like-to-dislike ratio and positive comments.

Others pointed out that the couple has produced several videos with the theme of a "period prank." The videos related to periods appear to perform better on average than the couple's typical prank and challenge videos, which comprise the vast majority of their content.

The "period prank" genre isn't limited to just the "Ryan and Danielle" channel. Other family and couple channels have gotten millions of views with staged period pranks involving fake blood and children.

When Insider searched "period prank" on YouTube, videos with anywhere from several thousand to several million views appeared, including one with an 8-year-old and one with a 9-year-old, according the videos' titles. Some of the videos showed young children with fake blood on their hands and underwear.

Ploof and Danielle didn't respond to Insider's request for comment.