Home » Lifestyle » After 10 years of angst, NBN’s big milestone has come in the nick of time

After 10 years of angst, NBN’s big milestone has come in the nick of time

Ten years after the first customer was connected and a decade of fierce debate the build of the national broadband network is effectively complete. Just in time.

When NBN Co chief executive Stephen Rue unveiled the group’s results for the year to June on Tuesday he also announced that 11.73 million premises – about 99 per cent of the nation’s premises – are now ready to connect, with 7.4 million of them already using the network. 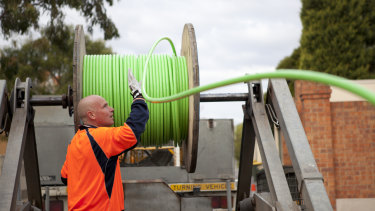 After 10 years about 99 per cent of the nation’s premises are able to connect to the NBN.

That doesn’t mean it won’t continue to add to the network or continue to upgrade its existing infrastructure but that its primary focus will shift from building to operating, with major implications for the scale and nature of its workforce, its management priorities and its finances.

The value and resilience of the network could not have been stress-tested more vigorously than it has in recent months as the coronavirus forced dramatic changes in the way Australians live and work.

It’s held up remarkably well, given the abruptness and unforeseeable nature of the big surges in demand for bandwidth as work and education shifted from offices and universities to the home and usage patterns on the network were transformed.

Average monthly download volumes per user have risen from 255 Gbps (gigabits per second) in June last year to 295 Gbps in June this year and average monthly uploads from 22 Gbps to 29 Gbps. Three years ago the comparable numbers were 160 Gbps and 16 Gbps.

That sudden shift and spike in broadband demand couldn’t have been managed without the NBN and, while there might still be mutterings about the multi-technology nature of the network, it is clear had that strategy not been adopted there wouldn’t have been the near-universal access to broadband that has been critical to the large-scale transfer of work and education online. 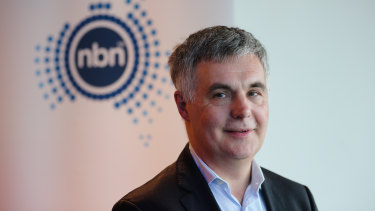 Assuming that construction of the stalled all-fibre-to-the-premises network that was envisaged more than a decade ago had continued, it would still be years before it was eventually completed and the economic and educational damage inflicted by the coronavirus would have been far greater.

Mind you, had Sol Trujillo’s Telstra (where the idea of a national broadband network originated) been able to agree terms with the Rudd government for a fibre-to-the-node network back in 2006, the network would have been built much earlier and cost taxpayers $4.7 billion not $51 billion.

That’s all history, much of it contentious, but Rue and his predecessor, Bill Morrow – Morrow rescued a failing project – deserve enormous credit for managing an exceptionally complex project to completion.

NBN Co enters the next phase of its history in good shape, generating more revenue than it forecast and on track to achieve the next critical milestone – generating positive cash flows by the second half of the 2022 financial year.

Its revenues and earnings before interest, tax, depreciation and amortisation (EBITDA) are surging as anticipated, with revenue up 38 per cent to $3.9 billion and EBITDA losses halving to $648 million in the year to June.

Revenue was about $100 million above forecast and could have been even higher had NBN Co not given retailers extra capacity without charge – foregoing about $80 million of revenue – to help them cope with the impact of the coronavirus.

The sudden shift and spike in broadband demand [during COVID-19] couldn’t have been managed without the NBN.

Subscriber costs – payments to Telstra and Optus as their customers are shifted onto the network – spiked 27 per cent to $2.4 billion.

As more customers are connected, and the average revenue per user continues to inch up (it increased from $44 to $45 in the latest period as the customer base shifts increasingly towards higher-speed packages) revenues will continue to climb.

At the same time, the amounts of capital the network consumes will fall now that the primary build is over, operating costs will drop as staffing needs change and shrink, and the payments to Telstra and Optus, which peaked in the year to June, will fall away. NBN Co will hand over the remaining $1.5 billion between this financial year and 2024.

Capital expenditures were about $900 million lower at $5 billion and operating costs down about $150 million, reflecting the maturing of the build.

It is important to NBN Co that it maintains the trends in its numbers – a continual swelling of its revenues, overall costs that are reducing relative to those revenues and relatively less capital intensity in the business.

It needs to achieve, or better, its target of $3 billion of EBITDA by 2022-23 because the federal government’s $21.5 billion of debt funding matures in 2024 and will need to be refinanced. 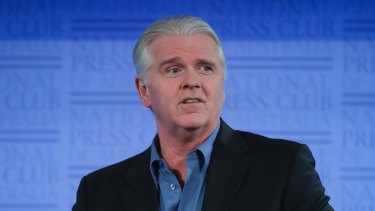 NBN Co has shown it can access private debt markets – it raised $6.1 billion earlier this year on very attractive terms – but it will need to continue to perform to maintain that access and create an opportunity for whoever is in government at that point to privatise the business, as both major parties eventually plan to do.

Incidentally, the government’s commissioning of a valuation of the NBN from Ernst & Young doesn’t appear to have anything to do with a privatisation, despite some speculation.

The fact that EY is only being paid $55,000 for its work tends to support the view the work is for internal government accounting purposes as the treatment of the network shifts from one base on its net assets to a valuation based on its cash flows.

EY would charge far more if the work were to lay the ground for a privatisation and, in any event, there are multi-layered statutory process in place for any future privatisation. It would be a lengthy and very public process.

That 2024 trigger for debt repayment would seem the logical moment to consider the fate of the $19.5 billion of taxpayer equity in NBN Co, including whether the amount of taxpayer money salvaged could be maximised through a merger of NBN Co with Telstra’s remaining infrastructure businesses to create a far larger and more diversified group, quite independent of both the government and Telstra.

Start the day with major stories, exclusive coverage and expert opinion from our leading business journalists delivered to your inbox. Sign up for the Herald‘s here and The Age‘s here.

A concise wrap of the day on the markets, breaking business news and expert opinion delivered to your inbox each afternoon. Sign up for the Herald‘s here and The Age‘s here.