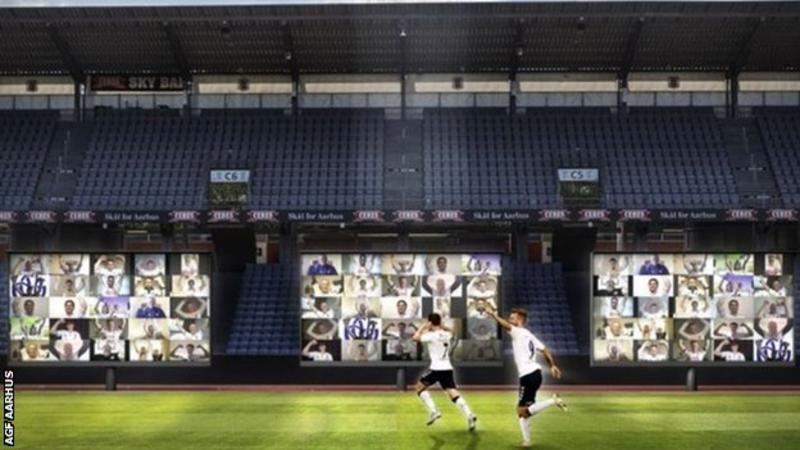 Staying in touch with friends and family, business meetings and quizzes – video calls have become a key part of life during the coronavirus pandemic.

And now Danish Superliga club AGF Aarhus are using the technology to bring 10,000 fans to the side of their pitch, despite the season being played behind closed doors when it restarts on Thursday.

At their home game against Randers, AGF will install a giant screen along the side of the pitch, creating what they call “the world’s first virtual grandstand” so fans can support the team for free via Zoom – there will even be a section for away fans.

“It’s about creating an atmosphere around the game so that the players will see that they have the support from the city even though there are no supporters in the stands,” the project’s co-ordinator Soren Carlsen told BBC World Service’s Mani Djazmi.

“They will hear it, they will feel it and see it on this big screen alongside the pitch.”

Carlsen says the idea came from a Danish TV show where artists sing from home and viewers join in via video link.

Three screens have been joined together to make a giant 40×2.8m screen with space for 200 fan images at a time. There will be 22 different sections for fans to choose from and TV coverage of the match will incorporate the virtual supporters.

“It will go alongside the pitch opposite the cameras, so the television station will also incorporate this in the coverage of the game,” Carlsen added.

“For instance, you often cut to the spectators when you have a goal. Here, you will cut to the homes of our supporters and then you’ll see them celebrate the goal whilst the players run alongside this screen.

“We have only had positive feedback from our fans and also from Randers who will have their own away stand in the virtual stadium.

“It’s an opportunity for them to get a sense of the community that they experience around football because it’s also about meeting people at the stadium, and here you’ll get a chance to meet some of the people that you are usually sitting with during the games.

“We will see how it turns out Thursday night, and if it’s fun and it’s working then maybe we will do it again at the next game.”

Any abusive language will result in expulsion from the meeting by a moderator.

“The same rule goes for Zoom as it does at the stadium,” added Carlsen. “We will have some digital stewards and they will be monitoring it, just like the social media platforms at the club. So they can make sure that you don’t see anything that you’re not supposed to see, and you don’t hear any profanities.”

AGF are by no means the first club to try new ways to create an atmosphere behind closed doors.

Fellow Danish side FC Midtjylland are installing a drive-in screen at their stadium, while clubs around the world have used cardboard cutouts of fans to fill stadiums.

While in South Korea, FC Seoul were fined for filling empty seats with ‘sex dolls’.