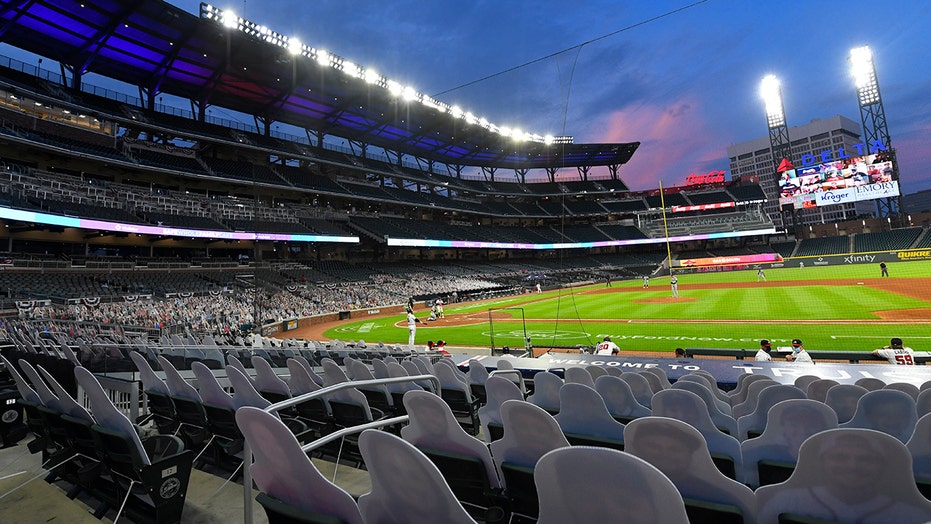 Amid the glow of baseball’s opening day, there is a cloud looming over the All-Star Game still more than three months away.

Georgia’s new voting law — which critics say unfairly limits access to the ballot box, especially for people of color — has prompted calls from as high as the White House to consider moving the midsummer classic out of Atlanta.

The game is set for July 13 at Truist Park, the Braves’ 41,000-seat stadium in suburban Cobb County. It would be the third time Atlanta serves as host, having previously held the event in 1972 and 2000.

One of baseball’s biggest stars, Braves first baseman and reigning National League MVP Freddie Freeman, weighed in on the divisive issue Thursday, just a few hours before Atlanta opened the season in Philadelphia.

Freeman suggested that the game should remain at Truist Park, but be used as a platform to promote voting rights.

“Why not?” he said. “What’s happened in the last couple of months has already gone through” the state Legislature and been signed into law last week by Gov. Brian Kemp.

“Why not use what we already have here as a platform in the city and the state it’s been passed through,” Freeman added. “I think it would be better to keep it (in Atlanta) and use it as a platform.”

Others have taken a different tack.

Everyone from President Biden to Major League Baseball Commissioner Rob Manfred to the head of baseball’s powerful players union, Tony Clark, saying that moving the game to another city should be on the table.

Biden told ESPN he would “strongly support” pulling the game out of Atlanta because of a law he described as “Jim Crow on steroids.”

Two of Atlanta’s sports team owners also seemed to express their opposition to the law in statements that bemoaned restrictions on voting access, though neither specifically cited the new statute.

“Every voice and every vote matters and should be heard through our democratic process in Georgia,” said Arthur Blank, owner of the NFL’s Atlanta Falcons and Major League Soccer’s Atlanta United. “We should be working to make voting easier, not harder for every eligible citizen.’

Tony Ressler, owner of the NBA’s Atlanta Hawks, noted that his team was the first in country to open its arena as an early voting site for last year’s elections. He said the team remains “committed to endorsing steps that promote equality and encourage participation by all who seek to cast a ballot.”

In the face of repeated assertions by former President Trump that Georgia’s election was fraudulent, the Republican-controlled legislature approved a sweeping new law that would, among other things, place new ID requirements on absentee voting by mail and prohibit handing out food and water to voters standing in line.

Supporters of the law have said it merely ensures election integrity and stamps out potential fraud. Others have said the motives are more sinister after an election that registered nearly 5 million votes with no credible evidence of serious wrongdoing.

Sports has long been a conduit for promoting social change, a movement that only grown over the past year with America’s renewed reckoning over racial injustice.

In the early 1990s, the Super Bowl was moved out of Arizona after the state failed to make Martin Luther King Jr. Day an official holiday. Once the state reversed course, the game was held in Arizona in 1996 and will return again for the fourth time in 2023.

For years, the NCAA barred holding its championships in states where the Confederate battle flag was officially recognized. The last of those states, Mississippi, adopted a new flag in January that removed a banner many consider a vestige of slavery.

The 2017 NBA All-Star Game was stripped from Charlotte because of objections to a North Carolina law that limited anti-discrimination protections for lesbian, gay and transgender people. After the so-called “bathroom bill” was repealed, the NBA brought its showcase event to Charlotte in 2019.

While numerous GOP-governed states around the country have pushed for new restrictions on voting in the wake of Biden’s victory over Trump, Georgia has become a lightning rod for the issue because of its pivotal role in the November election.

With the hefty turnout buoyed by early and absentee voting, Biden won a narrow victory over Trump in the Peach State — the first time Georgia has been won by a Democratic presidential candidate since 1992.

While much of the attention in the sports world has focused on the All-Star Game, a civil rights organization called on the PGA Tour to move the Masters golf tournament — the sport’s first major championship of the year — out of Georgia.

Augusta National, an exclusive club that has previously faced protests over its one-time exclusion of Blacks and women from the membership rolls, ignored the request and carried on with a women’s amateur event that leads into next week’s Masters.

Another prominent women’s tournament is set to be held in suburban Atlanta this summer.

The Women’s PGA Championship — one of five majors on the LPGA Tour — is scheduled for Atlanta Athletic Club in Johns Creek, Georgia from June 24-27.

The LPGA has not responded to a request for comments on whether a new venue is under consideration in the wake of the Georgia law.