Calls for an amnesty on undocumented farm workers received a boost on Friday when a federal government advisory panel said granting visas would encourage them to come forward for COVID vaccinations. 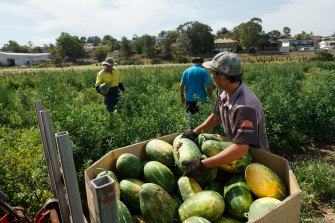 A report commissioned by the federal Agriculture Department is calling for an amnesty on undocumented farm workers to encourage them to come forward for COVID vaccination. Credit:Max Mason-Hubers

Undocumented migrant labourers, most of whom labour in the fruit and vegetables industry, were likely to avoid contact with government, including at vaccination clinics, due to fears they could be identified for deportation, the committee said in a report released on Friday.

“It is a potentially dangerous situation for the Australian public to have 60,000 to 100,000 overseas workers avoiding contact with clinics and hospital,” it said.

The amnesty proposal is one of 37 recommendations in the report, which the Morrison government commissioned to assess agriculture’s workforce needs.

Agriculture Minister David Littleproud said the committee’s amnesty proposal was a “good idea on the surface” but he would have to defer to national security concerns, which are the responsibility of the Home Affairs Department.

Mr Littleproud said on Friday he would consider the recommendations before responding in full.

Adelaide University academic Joanna Howe, who has conducted extensive research into undocumented workers, said the committee’s report was a landmark moment where an official government process had recognised the scale of the problem with undocumented workers.

The majority of undocumented workers are farm labourers in horticulture who can earn as little as $3 an hour.

Dr Howe said the “vast majority” were lured into Australia by criminal networks under false pretences, including claims the tourist visas would provide them with workplace rights.

“This inquiry is the first time we’ve had acknowledgement that the dark underbelly of the industry is undocumented workers who don’t have workplace rights and have been the victims of scams themselves,” she said.

Border closures have dramatically reduced the number of backpackers on working holiday maker visas and Dr Howe said industry’s labour needs could not be filled without undocumented workers.

She said unless government incentivised undocumented workers to come forward, using a scheme such as the amnesty, “they are essentially endorsing the status quo”.

Australia’s farm workforce laws needed major reform, the committee found. It called for a crackdown on dodgy employers, including a “fit and proper person” test, a five-year ban on using backpacker labour for breaches of migration or workplace laws, and the creation of a national register for infringements.

The committee said all states should adopt the labour hire scheme Queensland had put in place for mandatory licensing of employers. It called on the federal government to mandate a national regime if states did not act in the next year.

Mr Littleproud said there had been “no pushback” from the states during negotiations.

The National Farmers’ Federation said rogue labour hire providers played a significant role in the problem with undocumented workers. However, chief executive Tony Mahar said the committee’s report did not provide sufficient detail on how to satisfactorily deal with the problem.