Another Hillsong Pastor Steps Down After Sharing Explicit Pics, Admitting to Infidelity

Darnell Barrett, 32, denied trying to “lure” a woman with his revealing selfies, calling it an “honest mistake.”

Another married Hillsong pastor has resigned in the wake of a sex-related scandal.

Darnell Barrett, 32, of the Montclair, New Jersey branch of the mega church stepped down on Tuesday after it was revealed he had sent explicit photos to a former church volunteer, according to DailyMail.

The news comes just six months after NYC Hillsong pastor Carl Lentz was let go for what the church deemed “moral failures.” Lentz later admitted to cheating on his wife.

In the two Instagram Story pics obtained by the outlet, Barrett is seen wearing white Nike Pro Compression Tights that exposed the outline of his private parts.

Barrett sent the selfies to his “close friend” group — but a former church volunteer who was not in his “close friends” received similar photos from him directly. He claimed it was an accident, but she called him out for “fishing.”

“Obviously, what you wanted me to see were the shirtless photos and the outline of your d—, let’s not play and act like that wasn’t the point,” the woman, who remained anonymous, wrote back in posts obtained by the news source. “Your messages to bait me into seeing your ‘raw s—‘ are obvious.'”

After DailyMail caught up with Barrett outside his home on Tuesday, he admitted he stepped down from his Creative Director position at the church, citing “infidelity” he was “working through” with his wife.

“We thought it was best for me to move on. I don’t want to get into the details,” he explained. “This was something that was just an honest mistake, and I informed my wife as soon as it happened.”

In regards to the church volunteer, he added, “I was not at all trying to lure her. I get that she, within the context of what’s happening with Hillsong, that she would draw those conclusions. But I barely know her. That was not my intention.”

The “context of what’s happening” appears to refer to the Lentz scandal that went down in November, causing Hillsong’s founder, Brian Houston, to release a statement regarding Lent’z firing.

“This action was not taken lightly and was done in the best interests of everyone, including Pastor Carl,” Houston wrote. “This action has been taken following ongoing discussions in relation to leadership issues and breaches of trust, plus a recent revelation of moral failures.”

Lentz followed up with an Instagram post, writing, “I was unfaithful in my marriage, the most important relationship in my life and held accountable for that. This failure is on me, and me alone and I take full responsibility for my actions.” 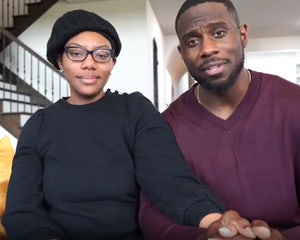