Apple will kill off the Android version of the Dark Sky weather predicting app after purchasing the company for an undisclosed amount.

While there will be no change to the iOS version of the app, the Android version is no longer available to download and will be shutting down on July 1.

Dark Sky for Android has already been stripped from the Google Play Store to prevent new downloads.

The decision to put an end to the Android version could be seen as a wily move by Apple to attempt to force fans of the popular app to move to iOS.

From left, the Dark Sky app – now only for iOS – provides users with hour-by-hour temperature readings, visualisations of weather activity and smartphone alerts

Versions of the app for wearables – both Wear iOS and non-Apple devices – will also be ended.

Dark Sky’s co-founder announced the purchase in a blog post, saying that the deal will allow the service to ‘reach more people’.

‘Today we have some important and exciting news to share – Dark Sky has joined Apple,’ said Dark Sky co-founder Adam Grossman in a blog post. 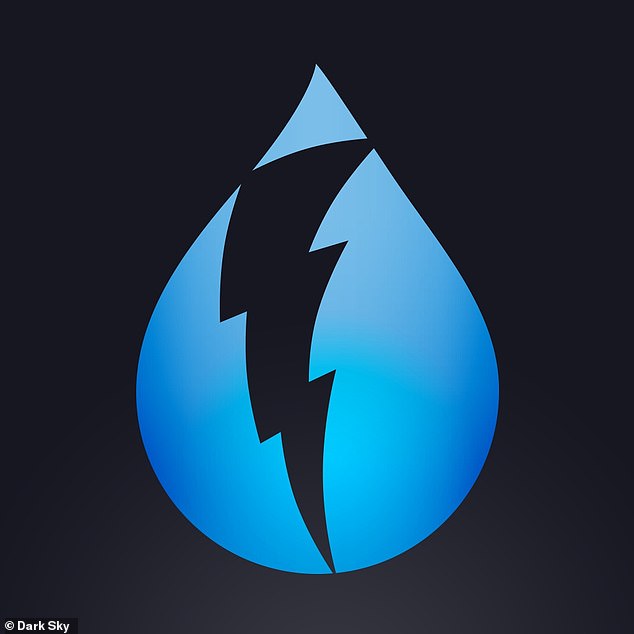 ‘Our goal has always been to provide the world with the best weather information possible, to help as many people as we can stay dry and safe, and to do so in a way that respects your privacy.

‘There is no better place to accomplish these goals than at Apple.’

Grossman said there will be no changes to Dark Sky for iOS at the moment, which will continue to be available for purchase in the App Store at £3.99.

Android subscribers who still have still active subscription at the time it is shut down on July 1 will receive a refund.

The reaction to the takeover – and the decision to drop the Android version of the app – was predominantly negative on Twitter. 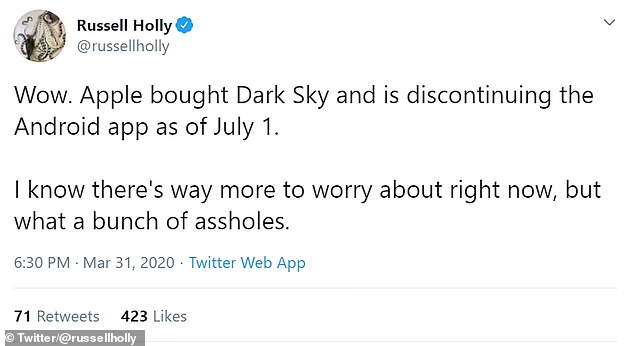 ‘Wow. Apple bought Dark Sky and is discontinuing the Android app as of July 1,’ tweeted @russellholly.

‘Apple buys darksky and kills its android app,’ tweeted @0xAmit. ‘If I was missing any reasons to hate apple (and I wasn’t) I just got another one.’

‘It will now be discontinued for Android. I need a new weather app. F*** Apple. #exclusivity.’ 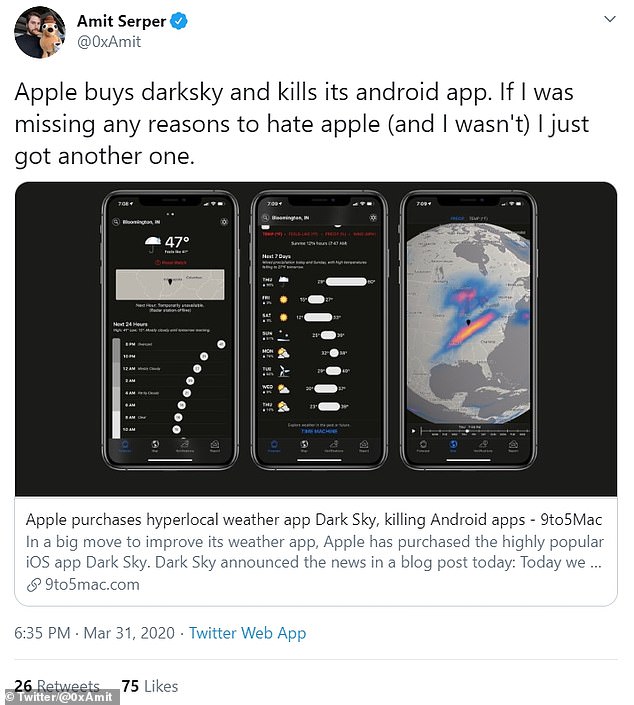 In his blog post, Grossman also said that Dark Sky’s application programming interface (API) software, which is used by other weather apps, will be available until 2021, but it will no longer allow new sign-ups.

Overdrop Weather, another weather-predicting app, said the takeover means its app will continue to function on Dark Sky API until the end of next year – if it doesn’t decide to remove it before that date.

It provides detailed forecasts for a particular location broken day by hour of the day, as well as animated maps that show oncoming weather events like storms.

It also sends out alerts to stay up to date ‘without having to check the app’. 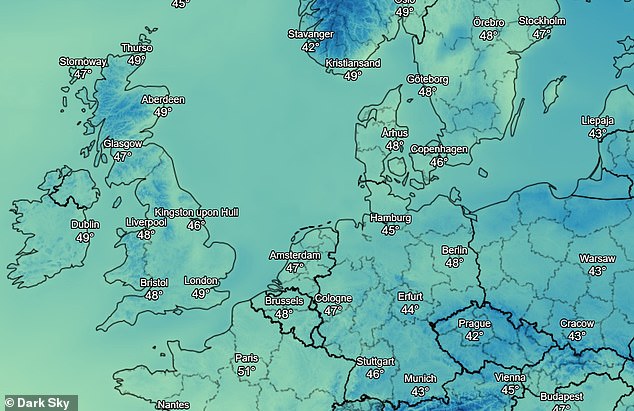 ‘With down-to-the-minute forecasts, you’ll know exactly when the rain will start or stop, right where you’re standing. It’s almost like magic,’ it says on its site.

Apple bought the music-identifying app Shazam just over 18 months ago – however, the Android version was kept alive.

THE TRILLION DOLLAR RISE OF APPLE

The company’s journey to the summit of the technology industry has been a rocky one, having seen Jobs (pictured right in 1976) leave the firm in the mid-1980s after his pet project, the first Macintosh computer, struggled and he attempted to oust then chief executive John Sculley. Wozniak is pictured left

1976: Founders Steve Jobs, Steve Wozniak and Ronald Wayne created the company on April 1 1976 as they set about selling computer kits to hobbyists, each of which was built by Wozniak.

The first product was the Apple I.

1977: Apple released the Apple II in June, which was the first PC made for the mass market.

1984: The Macintosh was introduced during an ad break for the Super Bowl and later officially unveiled during a launch event. It was discontinued a year later and Jobs left the firm.

1997: Apple announces it will acquire NeXT software in a $400 million deal that involves Jobs returning to Apple as interim CEO. He officially took the role in 2000.

The then Chief Executive Officer of Apple, Steve Jobs, with the iPhone

2011: Jobs resigned in 2011 due to illness, handing the CEO title to Tim Cook. Job died in October from pancreatic cancer.

2014: Apple unveiled the Apple Watch. It also unveiled its first larger iPhones – the 6 and 6 Plus.

2015: After purchasing Beats from Dr Dre, Apple launched Apple Music to compete with Spotify and other music streaming services.

2016: Apple returned to its roots and announced the 4-inch iPhone SE. Meanwhile, the firm is embroiled in a legal battle with the FBI, involving the agency demanding access to the locked phone used by Syed Farook, who died in a shootout after carrying out a deadly December attack in San Bernardino, California with his wife. The court order was dropped on March 28 after the FBI said a third party was able to unlock the device.

2017: Apple introduces the iPhone X, which removes the home button to make way for a futuristic edge-to-edge screen design and a new FaceID system that uses advanced sensors and lasers to unlock phones with just the owner’s face.

2018: In a first for the company, Apple introduces new features in its latest operating system, iOS 12, that encourage users to manage and spend less time on their devices. The move was spawned by a strongly worded letter from shareholders that urged the firm to address the growing problem of smartphone addiction among kids and teenagers.