McDonald, a six-time Archibald Prize finalist, first made contact with the writer when he was creating a documentary about Manus Island in Papua New Guinea, where Boochani was held for more than six years. 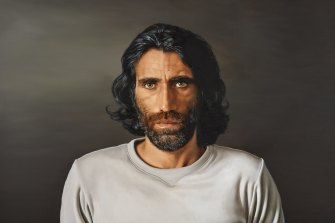 The New Zealand government gave Boochani refugee status in July, and McDonald stayed with him there for five days so he could sit for the portrait.

"His portrait’s inclusion in the Archibald has considerable meaning. While recognised as Australia’s biggest art competition, the Archibald also transcends the art world, inhabiting a prominent place in our nation’s broader cultural landscape. In its almost 100-year history, the prize has been a touchstone to single out individuals who have made valuable, often inspirational contributions to Australian public life and society," McDonald wrote in a piece for this masthead.

"That Boochani’s portrait will hang in the same space occupied by prime ministers, Indigenous leaders, scientists, academics and our nation’s leading artists, writers and cultural icons is a measure of the significant place he’s cemented in our recent history, not to mention a source of some obvious irony, given that he’s achieved this despite never even setting foot on the Australian mainland."

McDonald said he was "thrilled and humbled" as she accepted the prize at the Art Gallery of NSW on Wednesday morning.

First awarded in 1988, the Archibald Prize People’s Choice is voted for by members of the public and carries a $3500 cash prize for the artist. More than 13,000 votes were cast in this year's prize.

Earlier this year, Vincent Namatjira became the first Indigenous artist to win the Archibald Prize with a portrait of himself and Adam Goodes titled Stand Strong for Who You Are.