Home » Lifestyle » Are your linens clean enough to stop the spread of coronavirus?

Are your linens clean enough to stop the spread of coronavirus?

Are your linens clean enough to stop the spread of coronavirus? Expert who supplies the Royal Family’s towels reveals why we should be washing pillows every three weeks and towels after two uses

With the UK in lockdown amid the coronavirus pandemic, homeowners are going the extra mile to keep their houses clean and tidy in the hope that good hygiene will halt the spread of the deadly illness.

But according to the experts at Christy England, who supply towels to Wimbledon and the royal family, people often put off washing their bedding and towels – with an estimated one in 20 people changing their sheets just once a month.

Speaking to FEMAIL, Helena Mead at Christy England has revealed why we all need to be washing these items much more often – including putting pillows in the machine every three weeks to help stop the spread of illness. 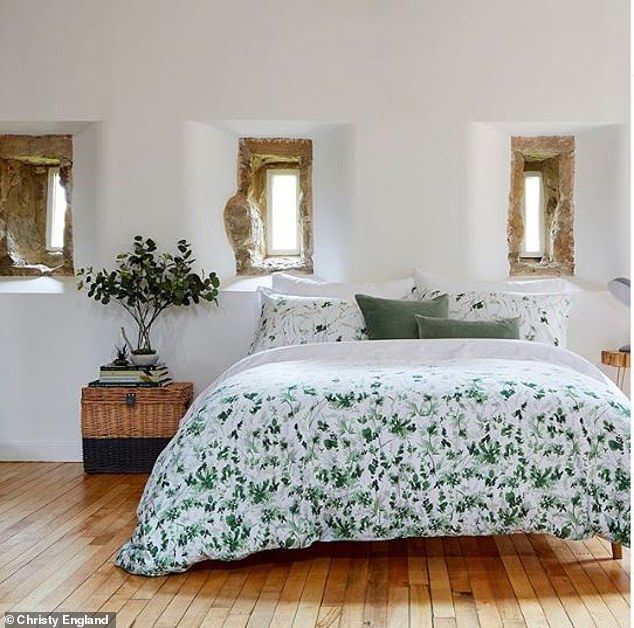 According to the experts at Christy England, who supply the towels to Wimbledon and the Royal family, most people put off washing their bedding (pictured) and towels, with some only changing their sheets once a month

‘Bedding should be washed once a week. Be sure to follow the washing instructions on the care label, as different fabrics need to be washed at different temperatures.

How do sheets and towels spread germs?

According to the NHS, bacteria can be spread on clothes, towels and sheet in three ways.

If someone is ill, they may have germs or bacteria on items such as towels and linens they use.

To stop the spread of infectious diseases passed through linens, these should be washed at 60C with a bleach-based product.

Items are likely to cause illness if you have someone in your home who has an infectious illness.

‘Many people get this wrong and leave it far too long.

Not washing your bedding for a number of weeks can result in a build-up of sweat and bacteria which over time can be harmful.

‘Before you wash, make sure not to overload the machine to avoid damaging the bedding in any way.

‘After washing, remove from the machine as soon as possible and for best results, tumble dry straight away.’

‘When we say pillows, we don’t just mean the cases, but the actual pillows.

‘Pillows should be washed every three weeks because, similar to bedding, they contain a build-up of sweat and dead skin.

‘Most good quality ones will be able to endure several washes without going lumpy, but be sure to check the care label.

Synthetic and feather pillows can be washed at slightly different temperatures.’ 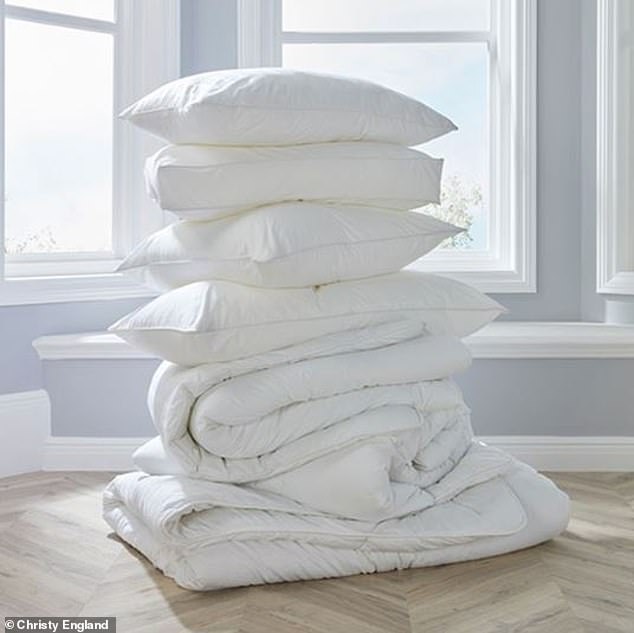 Helena advised that pillows (pictured) should be washed every three months as, similar to bedding, they contain a build-up of sweat and dead skin

‘Whilst washing your hands thoroughly with soap and water helps to prevent the spread of unwanted and harmful germs, the final step is drying them with a towel, so it’s very important to keep them clean too.

‘Towels pick up bacteria from the human body, and combined with the addition of moisture, towels can become a breeding ground for bacteria.

‘Using a towel that is used, unwashed and damp can spread bacteria throughout the household.

‘Wash towels after two days of use. Regularly washing towels will expel bacteria on the towel. 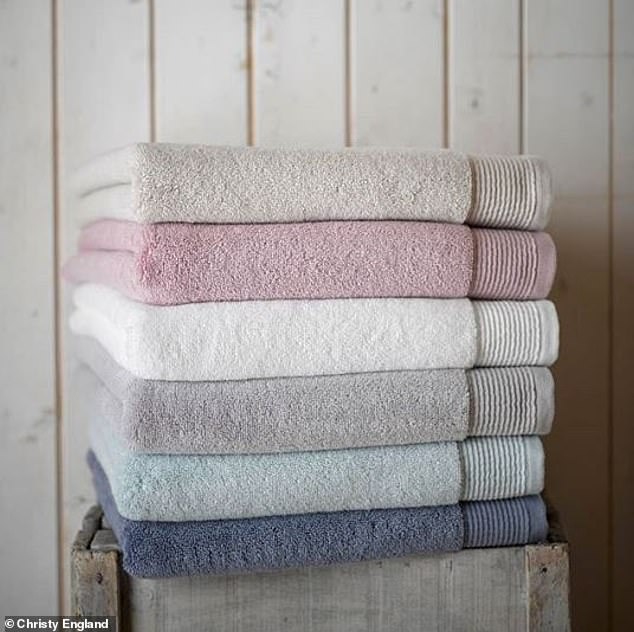 ‘Towels pick up bacteria from the human body, and combined with the addition of moisture, towels can become a breeding ground for bacteria’ Helena explained. They need to be cleaned every two day

‘Wash towels at 60 degrees so that all the microorganisms are removed.

‘After every use, allow towels to completely dry out. Rotate your towels to give wet towels time to dry.

‘Don’t share your towels with family members. Everybody should have a separate towel to discourage the spread of bacteria between people.

‘Avoid hanging towels to dry on the same hook or bar. Spread them out separately so that as much surface area is exposed as possible.