Home » Lifestyle » Asking For A Friend: How do I tell my child I can’t afford what they want?

Asking For A Friend: How do I tell my child I can’t afford what they want? 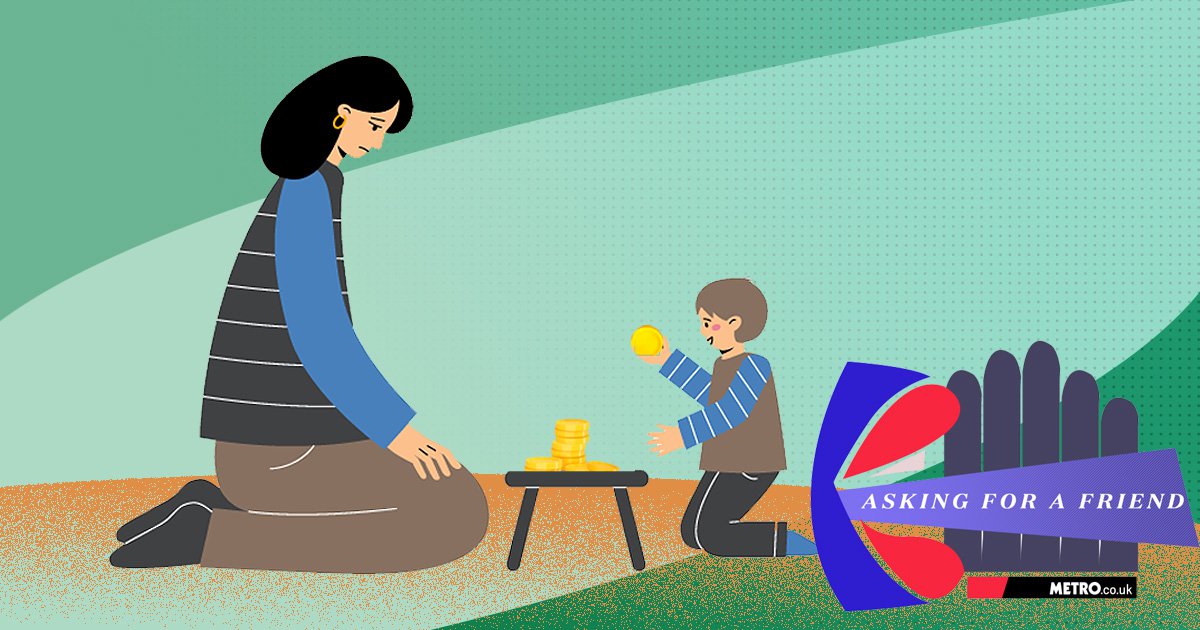 I’ll always remember rifling through a copy of the Argos catalogue as a child, optimistically circling the items I wanted to find under the tree at Christmas.

Looking back, I can’t remember if I knew deep down that I wouldn’t be getting the majority of those items, if any, but I learned early on that ‘money doesn’t grow on trees’, and that if I wanted anything excessive (like a designer bag or a pair of Chuck Taylors) that I’d probably have to earn it.

With the cost of living constantly rising – RPI inflation is currently at 11.8%, food the most expensive it has been in decades and millions of households can’t afford broadband – the majority of people are struggling to afford basic necessities, let alone new toys and fancy holidays.

But that doesn’t make telling your children this any less tricky.

Talking to your children about money can be rocky territory, says hypnotherapist and financial coach Emma Gosling, because how you go about it can impact their beliefs about money all the way up into adulthood, especially depending on their age.

‘It’s very hard for young children to have a concept of money and often when we reject their requests for things we can’t afford,’ she tells Metro.co.uk.

‘Children don’t use logic to see the bigger picture of the cost of things, family money struggles or how there isn’t a bottomless money pot.’

For this reason, we need to be strategic.

According to Georgina Durrant, author of 100 Ways Your Child Can Learn Through Play, how you go about the money conversation will depend on your child’s age.

‘There’s been a lot of things recently in the world that may have caused worry and anxiety for children so it’s important if you do discuss it with younger children that you make sure it’s explained in a way that won’t cause unnecessary worry,’ she tells Metro.co.uk.

‘Maybe just explaining that everyone is having to be a little bit more careful with how much money they spend at the moment could be sufficient.

‘If you’ve already had a conversation about being more careful about money then it can be helpful for times when they may ask you why they can’t have another toy or ice cream or go somewhere their friends are going.’

According to Tanith Carey, author of What’s My Child Thinking? Practical Child Psychology For Modern Parents, it’s also important to ensure your child knows their basic needs will still be met and to make sure you don’t dismiss their feelings when they’re upset about being told ‘no’.

‘But see this also as a good moment to talk, without shaming them or making them feel guilty for asking, about the fact that money is usually earned and is never limitless,’ she tells Metro.co.uk.

‘Use this as an opportunity to discuss their needs versus their wants, and teach them how to save for the things they want, even if it’s just a pound of pocket money a week.

‘This will teach them an early lesson on how that feels better than splurging all in one go and this will be a milestone in their self-regulation.

‘Put the coins in a glass jar so they physically see the sum grow.’

‘Having a low-key chat before you go to the shops can be helpful,’ says Georgina.

‘Nothing big and stressful, just a little reminder that we are having to be careful about money at the moment.

‘Then if you do get into a situation where they are next to something in a shop that they would like to buy, you can remind them of the conversation you’ve had together earlier in the day.

‘This way it’s not coming as a shock to them and it preempts and avoids any upset and disappointment.’

It’s important that the rest of your family is on board about when you say no to things and why.

‘Children are much more likely to understand and accept changes in rules if they are given consistently and fairly,’ explains Georgina.

‘If they know that now we don’t buy lunch on trips out, but always take our own sandwiches and drinks, they will soon accept this as the norm if everyone does the same with them every time.’

Emma suggests remaining neutral when talking to children about money, especially when it involves telling them no, in order to foster a healthy relationship with money.

‘It’s better to be neutral about saying no to children without upset, anger, frustration and avoid using phrases such as ‘we’re not made of money’ or ‘money doesn’t grow on trees,’ she says.

‘This will help children develop a healthy relationship with money.

‘When a parent is upset or angry when talking about money, this can create a belief in children that money is a bad thing because it upsets people or that money shouldn’t be talked about or mentioned, which can create financial avoidance in adults.’

Instead, Emma suggests talking about money truthfully and practically.

She says: ‘You can talk about how you receive a certain amount of money each month and that money has to be shared out to pay for certain things like the mortgage/rent, food, petrol, etc.

‘Then, each month, you see what is left over and you make a decision on what to spend that money on and how much to save for bigger things you want to buy.

Allowing children to feel like they play an active part in budgeting decisions can help them feel like they have some control over the situation and might stop them from worrying.

‘If you show them the money you have to spend, ideally in cash so they can visualise it, and list together what you need to buy, they can start to help budget for how much to allocate to which items,’ says Georgina.

‘This is a really useful life skill for when they get older.

‘It then helps them physically see how much (if any) money is left for any non-essential items they wanted too, and means children can understand the reason why they can’t have something.’