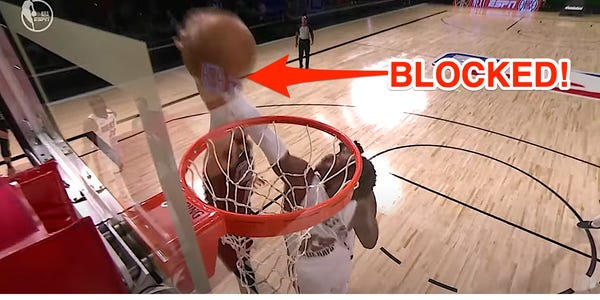 Miami Heat center Bam Adebayo came up with one of the great defensive plays of the NBA playoffs to seal the Heat's Game 1 win over the Boston Celtics on Tuesday.

With seven seconds remaining in overtime and the Celtics trailing by one, Celtics forward Jayson Tatum drove to the basket. Tatum blew by the Heat defense and rose for what looked like a rim-rattling dunk, when Adebayo met him at the rim, stopped the ball in midair, and sent it back.

The Heat then knocked down two free throws to go up by three. Tatum had a chance to tie it at the buzzer, but his three-pointer rimmed out.

Many in the NBA world called Adebayo's play the block of the year and one of the best blocks in NBA history.

LeBron James could quibble with Magic Johnson's assertion above, as could Marcus Smart, who had a clutch chasedown block in Game 7 of the second round of the playoffs. But Adebayo's incredible play nonetheless moved the Heat three wins away from a Finals appearance.