Home » Lifestyle » ‘Basket case’: Key Defence assets out of action for more than half of each year

‘Basket case’: Key Defence assets out of action for more than half of each year

Some of the Australian military’s key weapons systems are out of action for more than half of every year, as concerns mount about Defence failing to meet its benchmarks for keeping its assets operational.

The Navy’s major combat helicopter flew only two thirds of the hours planned over the past five years, leading the federal Opposition to claim the sustainability of Defence’s weapons systems “continues to be a basket case”. 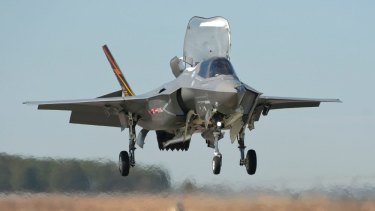 The F-35 Joint Strike Fighter are among the assets not meeting their benchmarks.Credit:REUTERS/Lockheed Martin Corp

An analysis of the last five portfolio budget statements shows the Navy’s major ships have been out of action for more than half of every year – 44 more days than projected. The Anzac frigates, Air Warfare Destroyers and the Collins-class submarines were not in use for an average of 190 days per year over the past five years, an 11 per cent shortfall on what was planned.

Amphibious ships were only available for 77 per cent of days of what was projected, while helicopters and planes are flying hours 30 per cent lower than projected.

The biggest underperformers include the APH Tiger helicopters, which flew 39 per cent fewer hours than budgeted, and the MRH-90 helicopters, getting in the air 29 per cent less than expected.

Defence’s spending on sustaining its key military assets has blown out by almost $5 billion – or 9.8 per cent – over the same period.

The Opposition’s assistant spokesman for defence, Pat Conroy, said the underperformance pre dated the COVID-19 pandemic and the government needed to explain the shortfalls.

“Sustainment of our weapons systems continues to be a basket case within Defence,” he said. “This underperformance predates the COVID pandemic and has continued in the last year with a significant deterioration since October last year after the impact of COVID was truly well known and accounted for.”

Mr Conroy said some of the lack of availability and cost blowouts were related to the long list of new equipment that is delayed under the government, forcing older weapon systems to run longer than planned.

“However, as worrying is the fact that some of the ADF’s newest equipment is nowhere close to meeting the required availability, for example the Airforce’s Joint Strike Fighters and the Navy’s new Romeo helicopters,” he said.

“The issue is Defence doesn’t revise its targets downwards, so you’re still stuck with this ambitious target that you developed five years ago for your new program,” he said. “For a mature aircraft that’s in service, then consistently hitting 90 per cent of planned hours is probably OK. There are some perennial underperformers however that don’t, such as the Tiger ARH and MRH-90.”

Defence Minister Peter Dutton has made the sustainment and acquisition of key defence capabilities a key priority, saying he wants to restore the military to its “core mission”.

Speaking generally about the portfolio, Mr Dutton earlier this month told this masthead he had some “frank discussions” with senior Defence officials about “about some issues and my view on those issues”.