BBC reporter rushed to marry before the 15-person rule introduced

We brought forward our wedding to marry in front of 30 guests: BBC correspondent reveals how he rushed to tie the knot and beat Government’s new 15-people rule being introduced today

A couple who moved their wedding forward with four days notice to avoid uninviting half their guests have unexpectedly gone viral after livestreaming the nuptials.

From today, new restrictions will mean weddings can only have a maximum of 15 guests, half the number previously allowed.

The couple, who were suppose to be getting married Saturday 3rd October brought their ceremony forward and set up a livestream so Louise’s 90-year-old grandmother who is shielding could watch from home.

But they unexpectedly picked up more than 10,000 views, with Ant and Dec, Victoria Derbyshire and Dan Walker all sending well wishes to the couple.

Speaking to FEMAIL, Colin revealed the reaction had been ‘mental’.

‘On Tuesday at 12.40 we heard Boris Johnson announced that weddings were going to be reduced from 30 to 15 from Monday.

‘This meant our wedding would have been torpedoed. We could not have even invited our nieces and nephews.

‘We spoke for 20 minutes and decided to go for it – to move the wedding to Saturday at four days’ notice.

‘By 3.30pm we had shifted the whole thing. Well, Louise had. 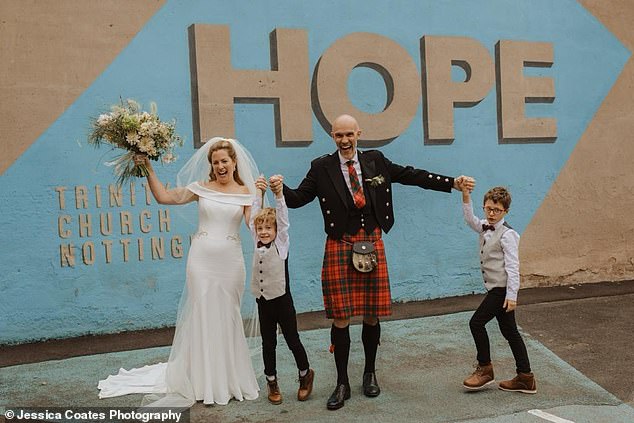 A couple who moved their wedding forward with four days notice to avoid disinviting half their guests have unexpectedly gone viral after livestreaming the nuptials. BBC Entertainment Correspondent Colin Paterson, 45, tied the knot to Louise Blyth, 37, in Nottingham on Saturday, with 30 guests present. They are pictured with Louise’s sons Jamie and Charlie 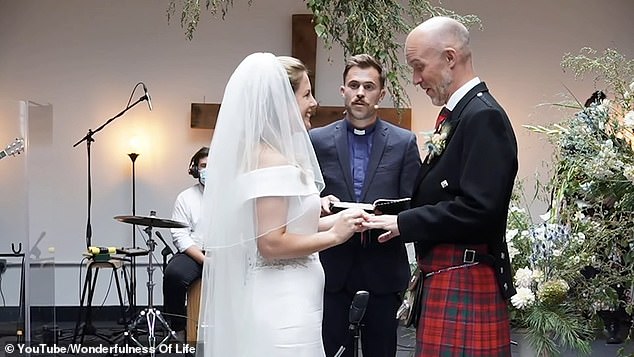 The couple spoke for ’20 minutes’ before deciding to bring their wedding forward by a week, with all their guests changing their plans to accomodate 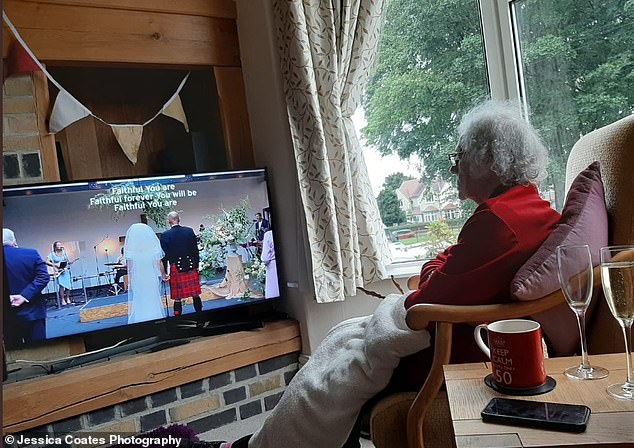 The couple, who were suppose to be getting married Saturday 3rd October brought their ceremony forward and set up a livestream so Louise’s 92-year-old grandmother who is shielding could watch from home.

‘Her church Trinity Church Nottingham were incredible. The whole team stopped doing their proper jobs to make it happen.

‘The florist, the photographer, everyone dropped their plans to help us get married before the restrictions came in.

‘Everything was Covid secure.

‘Louise’s Nannan Dot who is 92 was not going to be able to come as she was shielding, so we decided to live stream it, so she could see it.

‘We were on 5live on Friday talking about being a couple who had moved our wedding to beat the regulations and I invited listeners to tune in if they wanted to see me cry.

‘Also when the service was late to start (because the mother of the bride was stuck behind a potato tractor!) I grabbed a phone and tweeted a link. 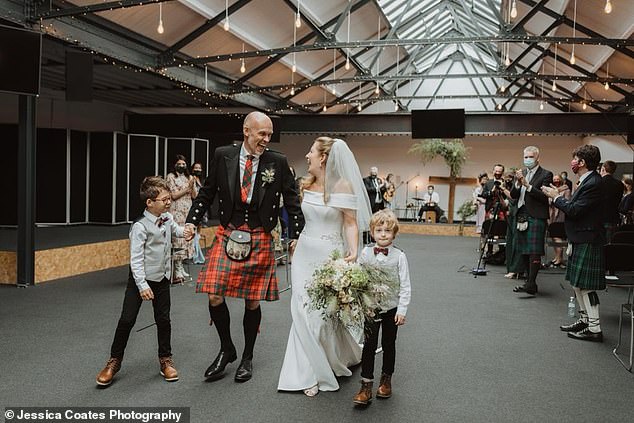 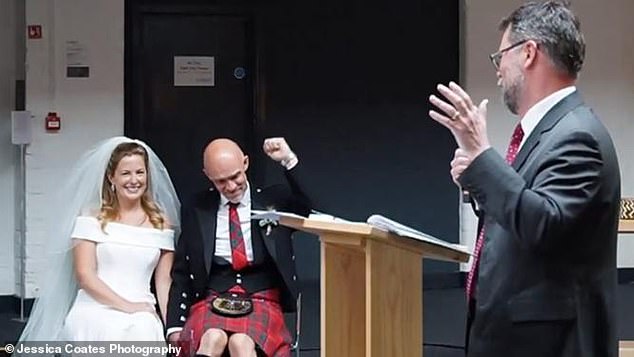 Colin, who is originally from Scotland, donned tartan for the ceremony while Louise stunned in a white dress 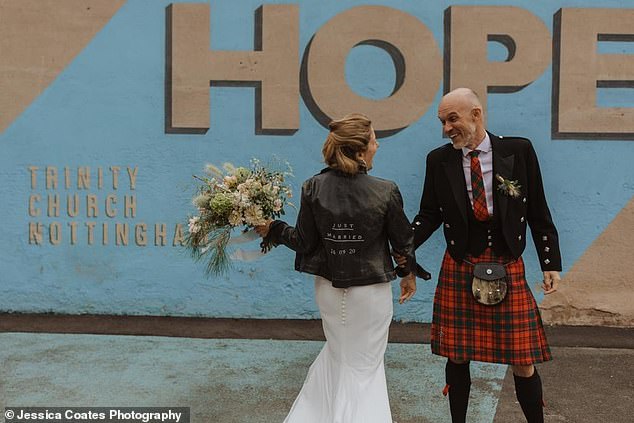 As the ceremony started late, because the mother of the bride was stuck behind a potato tractor, Colin tweeted a link which then went viral. The couple are pictured after the ceremony

The couple unexpectedly picked up more than 10,000 views, with Ant and Dec, Victoria Derbyshire and Dan Walker all sending well wishes to the couple. BBC presenter Colin Paterson moves wedding to beat restrictions

‘It seems to make a lot of people very happy. My old crew from Liquid News, which I presented with Claudia Winklekman, had a Zoom screening. There was a lot of chat there about the “hot vicar”.

Colin works for the BBC and often interviews huge stars, just this week he spoke to Millie Bobbie Brown and Helena Bonham Carter, while he also covered for Emma Barnett on her 5live show.

‘I’ve covered 18 Oscars, and 15 Mercury Prizes, but had to miss this week’s due to what happened,’ he added. 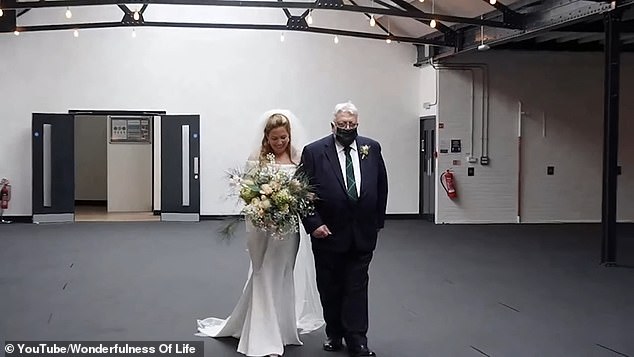 Louise, who lost her first husband to bowel cancer in 2016, is pictured walking down the aisle before the nupitals 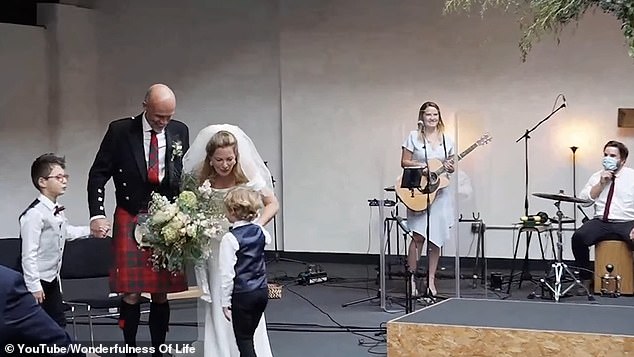 Meanwhile Louise is a young widow and has recently released a memoir about grief and gratitude.

In 2016 her first husband George died from bowel cancer aged 33 leaving her with one and three year old boys Jamie and Charlie.

During lockdown she released the book about her husband dying called ‘Hope Is Coming’, which has had 50 five star reviews on Amazon and is in talks to be developed into a TV drama.

More than 73,000 weddings and civil partnership ceremonies were cancelled after a ban was declared at the start of lockdown in March.

Last month, the Government declared they could resume, but capped the number of guest to 30. Addressing Parliament last week, Boris Johnson confirmed wedding guest numbers would be capped at 15 – but 30 mourners are allowed at funerals.