The Morrison government used the best and worst practices to put in place key pieces of legislation, two ideologically opposed think tanks have found in a wide-ranging analysis that shows shortcomings in the way states invoked emergency powers to deal with the coronavirus pandemic.

The annual review of the way laws were developed, debated and put in place, commissioned by the non-partisan newDemocracy Foundation, found the federal government's legislative handling of its My Health Record was almost perfect. 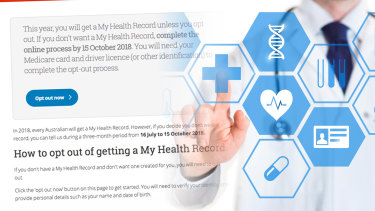 Ideologically opposite think tanks the IPA and Per Capita have ranked the Morrison government’s legislation around the My Heath Record system almost perfect.Credit:Alamy

But it faltered with its contentious repeal of the so-called medevac laws, which restored the full discretion of federal ministers to accept or reject medical transfers to Australia from overseas detention centres.

The analysis was done by the right-leaning Institute of Public Affairs and the progressive Per Capita Australia think tanks. In almost all cases, they were agreed on their findings.

The two organisations examined 20 separate case studies of laws put in place through the federal, NSW, Victorian and Queensland parliaments over the past year. Each piece of legislation was marked against a set of criteria including its justification, whether the government established a need for the law, if other options were examined and public consultation to ensure a proper process had been used.

Chair of the steering committee that oversaw the project, Percy Allan, said governments repeatedly ran into trouble because of faulty decision-making processes that undermined the public's trust.

"Good process leads to good policy, which in turn makes for good politics," he said.

Both Per Capita and IPA gave their highest marks to the Morrison government's My Health Record bill and to the Queensland government for the creation of an ombudsman to deal with complaints about personalised transport systems like Uber.

The IPA said the ombudsman policy had gone through an independent review process, other options had been explored and the government had used a cost-benefit analysis to help guide its policy position.

Per Capita said the Morrison government had gone through an extensive consultation process with its My Health Record plan while setting out clear objectives for what it was proposing. 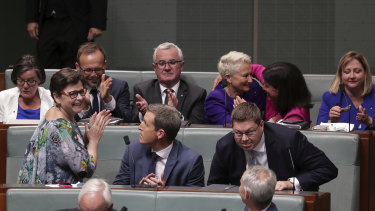 Labor and crossbench MPs voted to pass the medevac laws in February 2019. By year’s end they had been repealed in a process rated as unacceptable by two independent think tanks.Credit:Alex Ellinghausen

"The government also showed flexibility in adopting amendments to the legislation that changed many of the implementation mechanisms," it found.

The worst-ranked piece of law was the way the federal government repealed the medevac laws in late 2019.

The IPA found the medevac repeal met only three of the 10 benchmarks, noting it was clear the government did not look at "finding alternative mechanisms to achieve objectives".

'Good process leads to good policy, which in turn makes for good politics.'

It said while the government had set out the costs of its policy change, it had not provided any evidence that it had considered the "pros and cons, and costs and benefits, of the policy proposal".

Per Capita gave the same score as the IPA on the repeal bill, noting just one submission to a Senate inquiry into the proposal supported the move. That submission was from the Home Affairs Department.

"Many of the claims the government made around the need for the policy were disputed or disproved by experts or by its own Senate committee report," it said.

The way the Queensland, NSW and Victorian governments used emergency powers to deal with the pandemic also came under criticism, with both the IPA and Per Capita finding none had argued possible alternatives or why they were being forced to use these powers.

The IPA found the three governments had made "no disclosure of underlying data or assumptions which prompted the declaration".

The two groups rated as mediocre the Morrison government's early release of superannuation policy, its HomeBuilder grant and its introduction of free childcare during the early stages of the coronavirus pandemic. The IPA said in all three cases, the government had failed to articulate fully why the policies were needed, there was little consultation and no sign that alternatives had been examined.

Both organisations also rated poorly the Andrews government's free TAFE laws, under which it spent $172 million to make 48 courses and pre-apprentice courses free for participants. Per Capita found there was no evidence provided supporting the need for the policy, no alternatives appeared to have been canvassed and no cost-benefit analysis was provided.