Brian May plays his Red Special guitar in 2014

Brian May has re-released his classic solo single Driven By You ahead of the re-issuing of his Back to the Light album in August. Posting the new music video for the track on social media, the 73-year-old highlighted the 2021 editing process and thanked all those involved during the live performances 30 years ago. The Queen guitarist wrote on his Instagram: “I spent a good 9 hours on a beautiful sunny day, locked in a dark edit suite, working with the great Simon Lupton on this new production – which we generated from two old videos and some raw live footage from 1992!”

Brian May continued: “We began by comparing the shots that had been chosen from the original video edits – by putting them side by side in two boxes.

“Then we found we enjoyed looking at the material that way so much we decided to actually use some of that in the final cut.

“And some of it tantalisingly generated some stereoscopic content if we let it, due to small offsets in the synch.”

The Queen guitarist then went on to pay tribute to Driven By You’s late drummer, Cozy Powell. 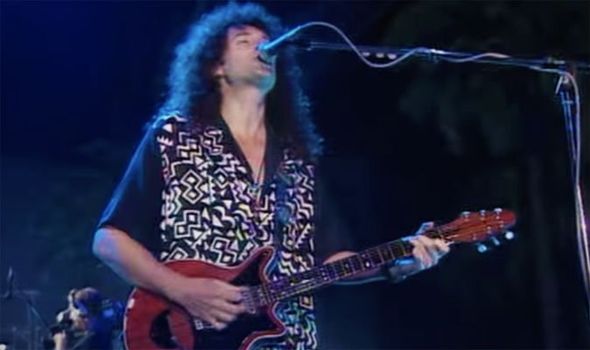 May wrote: “In the video you see lots of dear pals of mine, to whom I owe so much …. the late great Cozy Powell is on drums – one of the most magnificent rock drummers of all

time and a dear friend who supported my first shaky steps into a solo career with his whole heart. I’ve dedicated the reissue of the Back to the Light to Cozy, and my debt is eternal.

He then went on to give shout outs to his other collaborators on Driven By You.

He said: “Then you see the legend that is Neil Murray – sometime bass player of Whitesnake, Sabbath, and many other great hard rock bands – and a pillar of strength in the original production of We Will Rock You in the Dominion London.”

May continued: “Neil was in ALL the incarnations of the Brian May Band, which is what you see here, and remains a great friend. There are two performances here – one in Seville for the Guitar Legends Festival, and one solo show in Rio.

“In Seville I was joined by surely the greatest ever Rock Keys man – Rick Wakeman – seen here playing with his fingers what I could only do with a sequencer on the record ! Wonderful man – animal rescuer and activist – most treasured friend.

“Then for this song Space Age Genius guitarist Steve Vai stepped in to play Rhythm for me ! An honour I can scarcely believe. Steve has been a close friend to me through all sorts of times – and remains an extraordinary exponent of the electric guitar – taking it to new places every day.”

The 73-year-old continued his tributes on another post, having run out of room on the original.

DON’T MISS
Brian May on ‘fighting way out of emotional black hole’ when younger [BRIAN MAY]
Freddie Mercury’s Queen in Japan ‘like second coming of The Beatles’ [QUEEN IN JAPAN]
Freddie Mercury on We Are The Champions ‘My most arrogant song!’ WATCH [FREDDIE MERCURY]

May went on to praise his backing singers from that time in his solo career.

He said: “On the left as you see them … first the lovely Maggie Ryder – herself a great solo artist and song writer too – she co-wrote ‘You’re the Voice’ – which became a huge hit for John Farnham (yes – I was honoured to play the song with him last time in Australia at the unforgettable Fire Fight Concert).

“Next – in the middle – the acclaimed Miriam Stockley – from South Africa – also a solo artist in her own right and a writer. In the right – yes – Chris Thompson – of Manfred Mann fame – a man with a truly extraordinary set of pipes – who coached me on breathing and developing my range while we were on tour. Chris also had a big hand in writing ‘You’re the Voice’ and sings it to devastating effect.

“Who else can you spot in the video … in black and white, fleetingly, you can see my dear Tech Man Brian Zellis – aka ‘Jobby’ at the time – my devoted Guitar tech, who ran my guitar and me for many years towards the end of the Queen glory days, and remains a trusted and precious friend. Nice to see him here – on a stage in Rio in sound check.”

May added: “You can also see some great fans who greeted me on our arrival in Brazil … I wonder if any of you guys can see this – I hope you’re still OK. Let me know !

“I’m pretty sure one of those boys in that car crazily following us gave me an Indian Chief pendant which I still wear to this day.

“But that might have been in Argentina … and you can catch a couple of glimpses of our one and only Spike Edney – who also stuck by me in the Brian May Band all through that era – and of course has become a pillar of the QAL live act.

“What else can you see in the video ? Steve Ferrone ? Legendary cohort of Eric Clapton, he was my other great find for the Seville show – and later also took over on a ‘cocktail’ drum kit for some of my more acoustic adventures. And … ? Something else ? Bri.”