Briana DeJesus kicked off Tuesday’s “Teen Mom 2” reunion by exclaiming, “My life’s a hot mess” — and ended it by walking out.

Part 1 of the reunion focused on Chelsea Houska’s exit, Leah Messer’s exes and Jade Cline’s relationship with her parents and Sean, before DeJesus took center stage … or center Skype, as it were.

Appearing virtually amid the pandemic, Briana was first asked about rekindling her romance with ex-boyfriend and father to Stella, Luis Hernandez — a hookup which resulted in her getting an STI.

“I’m gonna blame it on the alcohol, the first time. The second time, it just happened,” she said. “Will there ever be another time? Hell no.”

After Dr. Drew applauded her for being so open about testing positive for chlamydia and going to Planned Parenthood for treatment, DeJesus explained she was surprised by her test results.

‘It kind of bit me int he ass, I always get tested. I thought it was going to be a regular visit,” she said. “And to get those results, I was super shocked and scared, like this can’t be happening right now. It’s chlamydia, it’s treatable.”

She added that she was nervous to talk about it on camera, because it’s still considered “taboo,” but since production filmed her getting the call, she had no choice but to address it. She also said she wasn’t sure whether Luis ever got treatment. 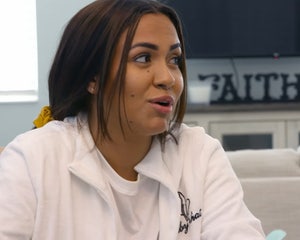 Briana was then joined by Devoin Austin, with whom she shares daughter Nova. While she has no formal child support arrangement with either of her daughters’ fathers, she has been getting money from them monthly — and, this season, she asked for an increase. Devoin clearly wasn’t thrilled.

During the reunion, he expressed his frustration with the fact that Briana was asking for more support, while she makes more than he does. “It’s on paper, we can bring out salary, how much money you’ve made, how much I’ve made, it’s not even close,” he exclaimed.

“I don’t think it’s fair you count what I make or don’t make, because at the end of the day we both made Nova together and it’s not fair that I’m doing everything by myself,” she shot back.

“You don’t look up what’s financially efficient for me and you, you make that decision on your salary,” he countered. “You do not consult with me before you sign anything. When shit hit the fan and Covid came and I’m not making no money, you’re stuck carrying the bag, that’s how that went down.”

Briana was over the conversation at this point. “I don’t have anything to say, I am done here, I don’t want to film with him anymore,” she said into camera and to cohosts Dr. Drew and Nessa Diab.

“I think he has a point,” Dr. Drew said to her. “His point is not completely invalid.”

DeJesus did not want to hear that — and she only got more aggravated at the situation after Pinksy interjected.

A preview for the next episode showed DeJesus returning to film the rest of the special.