Top economists want the dole permanently increased in 2021 and a closer review of the federal government's wage subsidy scheme JobKeeper to determine the future of the $100 billion lifeline.

The two major support schemes were the centrepiece of the federal government's response to the coronavirus pandemic but both are being phased down in January. The payments will be reviewed before they end late in March. 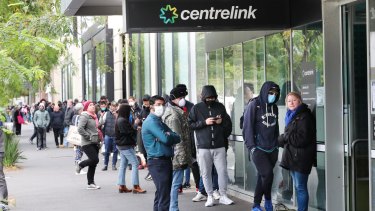 Economists are divided about what should happen to the federal government’s wage subsidy payments.Credit:Jason South

Former Reserve Bank governor Bernie Fraser said there needed to be a 50 per cent to 100 per cent increase in the permanent level of JobSeeker, but it also should be "backed up with other things".

"The jobs need to be there and [government] spending on all sorts of things like social housing," he said. "In the meanwhile there needs to be a respectable increase."

Mr Fraser said JobKeeper had been "a bit hit and miss" but he supported the scheme's intention and said it needed to be analysed to ensure the support was directed to those most in need as different industries rebounded.

The tourism industry is already pushing for it to be extended with business leaders meeting with Tourism Minister Dan Tehan on Tuesday to discuss further support for the $152 billion sector, which has struggled during restrictions on interstate and international travel during the pandemic.

Unemployment payments before the pandemic were worth $565.70 a fortnight but were bolstered with an additional $550 fortnightly payment in late March. This supplement was dropped back to $250 in September and will be reduced further to $150 on January 1.

Social Services Minister Anne Ruston insists the decline in the JobSeeker supplement from January 1 is "an extension of the elevated levels of support" to people on welfare compared to what they were receiving before the pandemic.

"To construe it as any cut is not correct," Senator Ruston said in Adelaide on Tuesday. "It was due to expire the day after tomorrow [Thursday] but the government made the decision that due to the recovery of the economy still being ongoing that we would continue those elevated levels of support."

JobKeeper has also been reduced as the economy has started to improve. The scheme originally provided employers with $1500-a-fortnight per employee to keep staff connected to their workplace. It was extended in late September at reduced rates worth $1200 for full-time workers and $750 for part-timers. From January 4, this will drop again to $1000 and $650 respectively before ending in March.

"The question of when JobKeeper is phased out… it depends on the circumstances," Professor Fels said. "It depends on the state of the economy and it's hard to say at this point."

University of Queensland Professor John Quiggin said JobSeeker should be returned to the same level as the age pension. The age pension is worth $860.60-a-fortnight for a single.

But he was unsure about the future of JobKeeper, particularly once the vaccine started to be rolled out.

"Ending it completely in March would be a mistake," Professor Quiggin said. "We need to review the situation then, there's no point fixating on a date and sticking to that date, we need to maintain a flexible approach until the time comes".

The chief executive officer of the Grattan Institute, Danielle Wood, said JobKeeper meant the government had avoided a fiscal cliff.

JobSeeker should be kept at a permanently higher rate of $200-a-fortnight compared with its pre-pandemic lever and complemented by more generous rent assistance, she said.

"What we will see [in the first quarter of 2021] is a lot of people experiencing for the first time how difficult it is to live on a payment so low which, even though it's above where it was pre-pandemic, is still not sufficient to cover basic needs," she said.

University of NSW Business School's Nigel Stapledon said working out the best level of JobSeeker was a "balancing act".

If the rate is increased too much it would be a disincentive to workers, he said, but acknowledged there was an argument support had been too low before the pandemic and had fallen relative to other benefits.

"The COVID-19 recession is here for a little bit longer and although the economy is growing if you define a recession more broadly in terms of unemployment, as I do, there may be an argument for extending the temporary supplement period," he said.

Opposition health spokesman Chris Bowen, whose western Sydney electorate includes Fairfield which has among the highest levels of JobSeeker recipients, said the reduction was a "body blow" to people doing it tough.