What price freedom of speech? At the Australian Building and Construction Commission, it’s $487,029 in legal costs and counting.

The watchdog is pursuing building giant Lendlease through the courts in a test case over the display of union-associated Eureka flags and posters on one of its sites at a cost that it disclosed to Senate estimates on Wednesday was nearing $500,000. Displaying union and employer organisation symbols on employer provided clothing, property and gear is banned by the government’s building code. 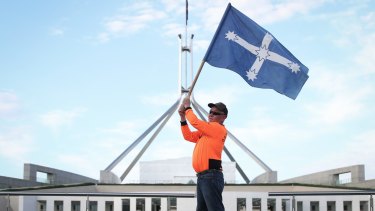 A CFMMEU representative flies the Eureka flag in front of Parliament House.Credit:Alex Ellinghausen

Labor and the Construction, Forestry, Maritime, Mining and Energy Union see it is an expensive assault on free speech.

Nonsense, says the Australian Building and Construction Commissioner Stephen McBurney, pointing to the legislation that prohibits the display of “building association” symbols on employer gear at government-funded projects.

“Here’s the kicker Senator,” he said under grilling from Labor Senator Tony Sheldon at estimates. “This is because such practices can result in an implication that membership of the building association is a mandatory requirement of employment.”

Freedom of association is really the issue, he and Liberal senators on the committee argued. To show it’s a problem, ABCC officials read from a binder of cases where CFMMEU officials pressured employees into joining the union in ways much more direct than a poster.

Just what the law says will be determined by federal court justice John Snaden, who heard arguments from both sides in December but has reserved his decision.

The specific issue is technical, though it also has constituional dimensions. It’s about whether the law prohibits all union symbols, or just those that imply union membership is mandatory.

Lendlease says it is the latter, while the commission is arguing for the former.

The implications go beyond the Eureka flag, which was first flown at the Eureka Stockade near Ballarat by miners furious at the colonial government’s administration of the goldfields in 1854.

An ABCC official told estimates that they had examined a COVID safety poster produced by the Master Builders Association of Victoria. The poster’s message was okay, the official said, but cautioned the logo might pose a problem.

But the commission will not pursue the matter while the Eurka flag litigation is ongoing.

“I’m still somewhat at a loss to see why you would bother to spend so much resources auditing these things,” Labor Senator Louise Pratt said.