Home » Lifestyle » Bursting in the bubble: it’s time for sport to step into the real world

Bursting in the bubble: it’s time for sport to step into the real world

Here is an overnight dispatch via Twitter from an English doctor. "Last night, I certified far more deaths than I can ever remember in a single shift. The little things hit you: a book with a bookmark in, a watch still ticking, an unread text message from family."

Here is some more news from England. Premier league players still have not agreed to pay cuts. Their total wage bill across 20 clubs is more than $A4billion. Meantime, the clubs are laying off staff hundreds at a time, who will then turn to the UK’s equivalent of Australia’s Jobkeeper scheme. 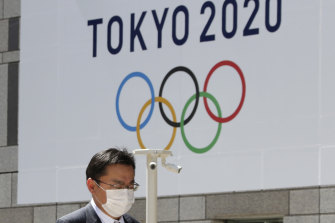 Even the Olympic Games has been postponed as the world navigates the coronavirus pandemic. Credit:AP

"My whole department is in danger," one club insider told The Independent, "but that seems incredible when our best player earns more in a week than all of them put together do in a year."

This makes Australia’s footballers of all codes look like Bill Gates level philanthropists.

It is one thing for sport to live in a bubble, another for it also to don blindfolds and ear muffs and take hallucinatory drugs. American jurist Earl Warren famously said he turned to the sports pages before the front because they recorded accomplishments rather than failures. Nowadays, he might conclude the sports pages report delusions. Not these pages, of course.

Now that Wimbledon has been cancelled, and since the Tour de France is so obviously pulling our lycra when it says it might race without crowds, pretty much all major sport is off globally.

But nearly all are dwelling on an imminent re-start and an unholy cram between now and the end of the year. The AFL is still talking June, the NRL July. Premier and Champions Leagues will be back any moment.

Australia’s cricketers will be in England for a one-day series in July, right about the time just deemed unsanitary for Wimbledon. Such golf and tennis majors as can be salvaged will be stuffed into the northern autumn, before it gets too dark and cold. Racing isn’t drawing rein at all, here or there.

It’s important to plan ahead, of course, and it’s part of sport’s escapism schtick to forever hold out hope. But have a look at the front page (or should I say home?). The coronavirus crisis is worsening, not easing. Most of the world is taking draconian action, but there will be a lag. The earliest predicted peak is July (good luck, Finchy). In the northern hemisphere at least, approaching summer brings expectation – hope – of relief. Here, we’re entering traditional virus time.

When the peak passes, how long will it then take for medical authorities to lighten restrictions and for people and players to feel safe again to resume everyday life? Months, at least. Already, non-sports gatherings as distant as November are being called off. One is a major climate conference in Glasgow. In most spheres, the idea is to make themselves a small target for the virus, even if it means staying in the brace position for a year.

Australians jolly themselves along with the possibility of salvage of their footy seasons, but perhaps they ought to be worrying instead about the status of this year’s Melbourne Cup or even next year’s Australian Open.

Back to England: if you think it’s all so damned unfair, what about Liverpool? They’re 25 points clear on top of the Premier League table and two wins away from their first title for 30 years, but face the prospect of the season being declared void.

Yet the most noble sentiment I’ve read in the last three weeks was written by Kristian Welsh, who runs a Liverpool fan site. "The year-long joy of being champions is outweighed by the lifelong joy of living," he wrote. The UK toll then was 10, it is now 2350. "Don’t make this about football alone. It will go on. Eventually."