Businesses forced to choose between migrant workers and locals

Australian businesses are being forced into a horrible choice between standing down local workers who can get government benefits or migrant workers on visas who have no support and can't get home.

Like thousands of other employers, TGI Fridays' revenue disappeared when the government ordered restaurants shut down. If the company keeps on its migrant workers, rather than Australian workers who benefit from the government's $1500 a fortnight JobKeeper payment, the company will save more than $1.1 million in wages over the next six months. 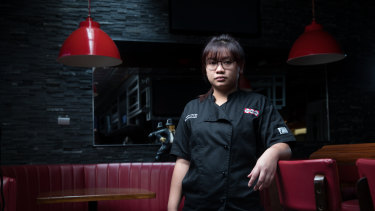 Nashla Martija, who came to Australia on a 457 visa as a chef at TGI Fridays in Sydney, now faces losing her job and not being able to access welfare.Credit:Janie Barrett

But if its Australian chief executive James Sinclair lays off his 60 migrant workers, which he desperately does not want to do, they will have no access to any income whatsoever. And so Mr Sinclair is begging the government to make visa workers eligible for JobKeeper.

"These are hardworking, outstanding family people," Mr Sinclair said. "They are rightly fearful about their future, they paid tax here, and they can’t leave."

Data from a Unions NSW survey of 3700 migrant workers shown exclusively to this masthead revealed half had lost their jobs because of coronavirus. Fewer than 2 per cent had accessed help, whether charitable or from the government, and 43 per cent were skipping meals out of financial necessity.

"The federal government must urgently expand both the JobSeeker and JobKeeper programs to temporary migrants, many of whom are already slipping into poverty and have limited healthcare, if any at all," Unions NSW secretary Mark Morey said. "Putting hundreds of thousands of people on the breadline is deeply immoral at the best of times." 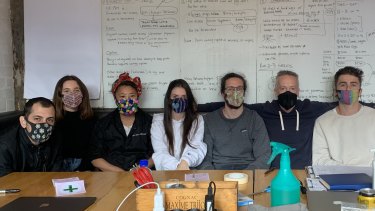 Paul Kasteal sits with his staff after they unanimously voted to give the remaining hours of work to their migrant colleagues who have no access to the government safety net.

At Miss Kuku on Melbourne's Chapel Street, Australian staff voted to stand down so their migrant workers colleagues could keep working the handful of shifts still available when the business pivoted to takeaway.

But owner Paul Kasteel is afraid he will have to close the business for good if government help is not extended to visa workers.

Asked earlier this week whether people on visas could be included in JobSeeker, Prime Minister Scott Morrison said the "short answer is no" but the government was considering the issue.