Home » Lifestyle » Can YOU spot the vegan sausage roll in the bakery?

Can YOU spot the vegan sausage roll in the bakery?

Brainteaser challenges puzzlers to spot the vegan roll hidden in the busy bakery scene – but can YOU beat the 11-second record?

A tricky new brainteaser is challenging the nation in a bid to keep them busy during lockdown.

The puzzle, created to celebrate the launch of Holland’s Pies’ first ever vegan product, asks Brits to find the hidden vegan roll in the busy bakery scene.

But with several other tasty treats jam-packed into the graphic, it may be harder than it first looks.

The average time is 18 seconds, but one eagle-eyed puzzler has completed the task in just 11 seconds. So, do you think you’ve got what it takes to set a new record? 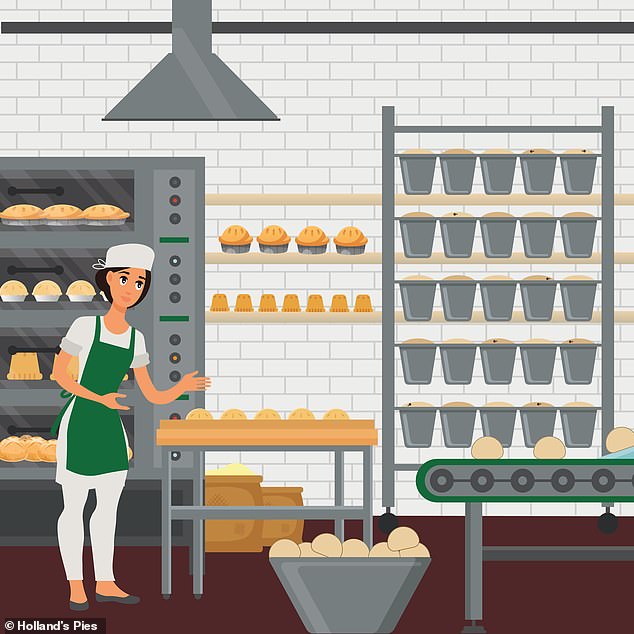 A new brainteaser, created to by Holland’s Pies’, asks Brits to find the Vegan Roll in the bakery (pictured)

With one in eight Brits identifying as vegetarian or vegan and 30 per cent of the UK population actively cutting down on or cutting out meat entirely, Holland’s Pies has created a Vegetarian Society ‘Vegan Approved’ Vegan Roll, currently available in Morrisons stores across the North West.

Leanne Holcroft, Brand Manager at Holland’s Pies commented: ‘We’ve been pastry specialists for over 169 years and what better way to celebrate the launch of our first ever vegan product than by challenging your family and friends to our brainteaser?

With the fastest time being an impressive 11 seconds, we’re excited to see if you can beat the time!’

And if you’re struggling to find the answer, then feast your eyes towards the left-hand side of the image, where you will find it circled in red. 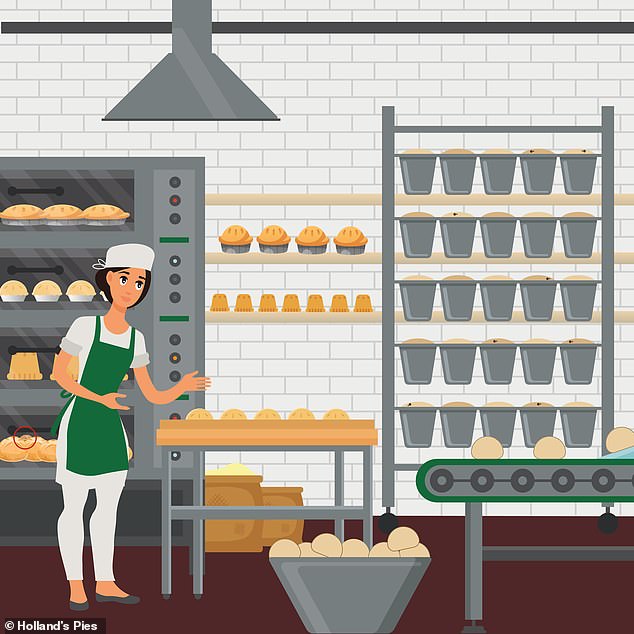 If you’re struggling to find the answer, then feast your eyes towards the bottom left-hand side of the image (pictured)

Another tricky seek-and-find puzzle challenges players to find the only dog with a diamond ring on its collar.

But just one of the pups has a precious jewel hanging from a loop on its collar. Can you work out which one it is? 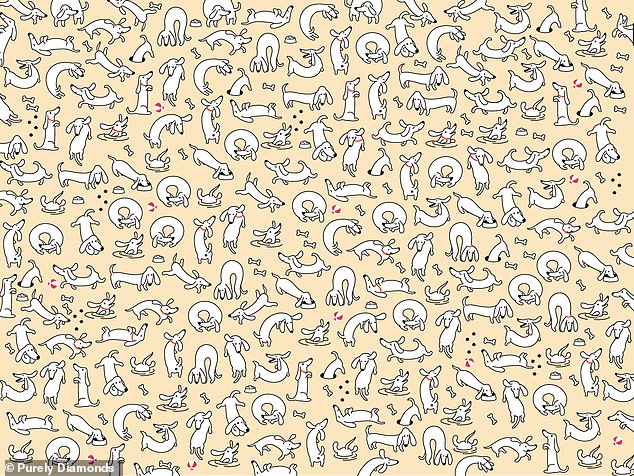 It comes after research revealed 1 in 10 pet owners now give their precious dogs or cats a central role in their wedding day – with some even trusted to carry the wedding rings down the aisle.

Take a close look and see if you can find the only dog trusted with the responsibility in this busy scene.

If you’re struggling to solve the brainteaser, try looking at the middle of each collar for one which is slightly longer.

Still not having any luck? The dog is to the right of the centre of the image. 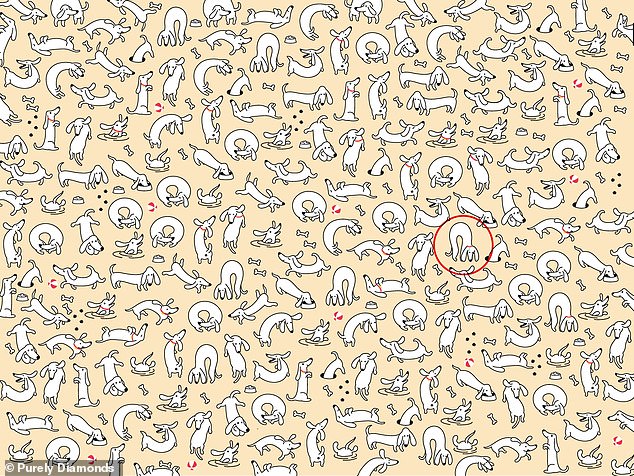 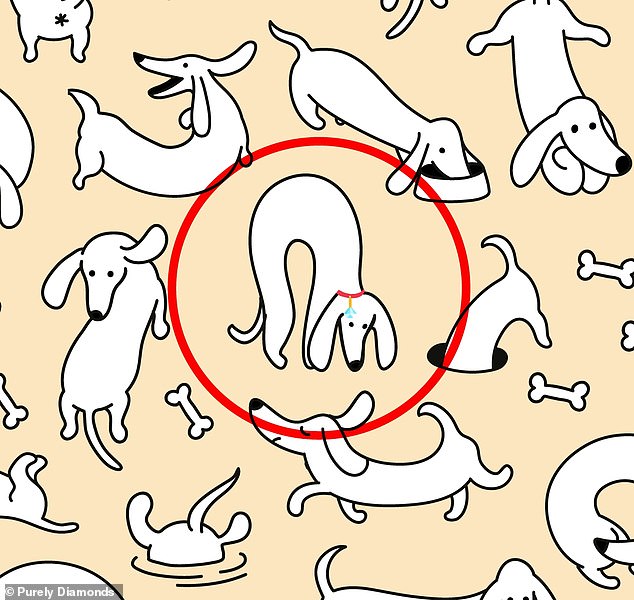 Another new brainteaser challenges players to spot the crayon hidden among a floral wallpaper design.

The baffling puzzle, created by British company Plumbs, is designed to stump even those who frequently play games. 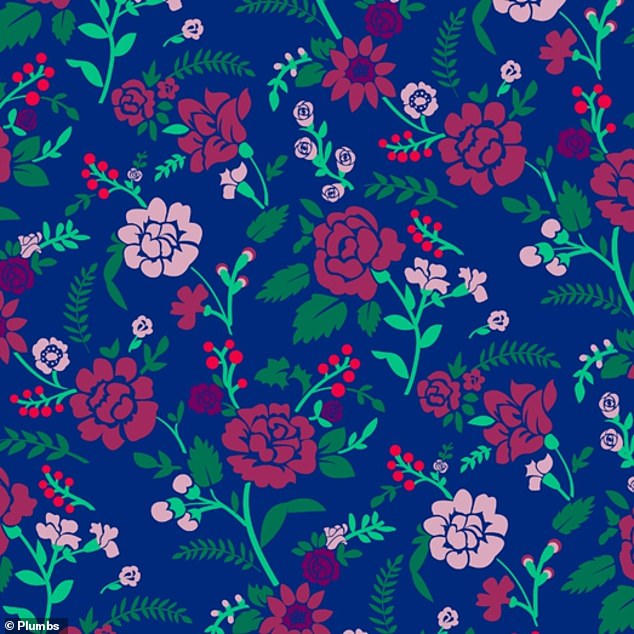 The tricky quiz can perplex even the most eagle-eyed of puzzlers.

If you’re struggling to solve the puzzle, try looking at the branches of each flower for one that looks slightly different.

And seeing as there’s no record for the quickest puzzler currently set, that means you could be the one to get the fastest time. 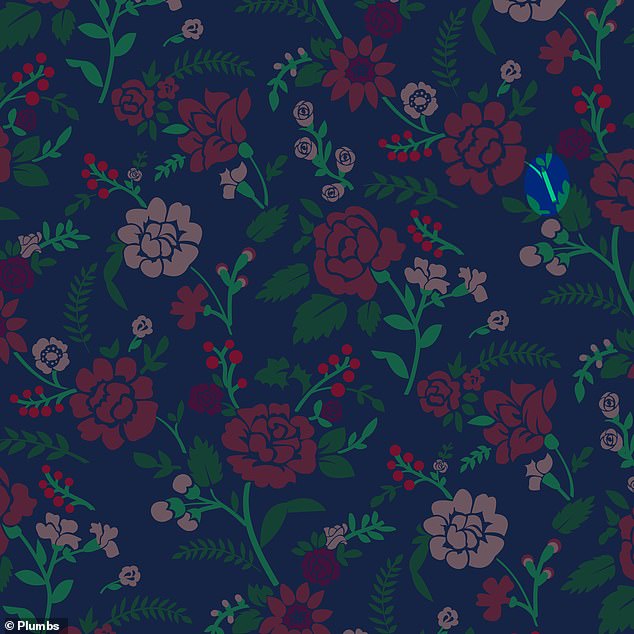 Another new brainteaser has challenged the nation to see how well they really know the Nineties.

Reflect Digital has created a say-what-you see graphic in which people are tasked with naming 50 cultural references from the 90s based on visual clues.

So do you think you know everything about the era? Well, then there’s really no excuse not to get full marks.

But be warned – the current record stands at 12 minutes, so you’d better get your thinking cap on! 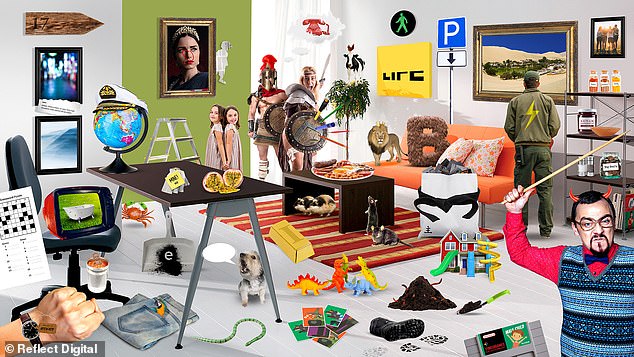 A new say-what-you-see brainteaser (pictured), created by Reflect Digital, challenges people to name the 50 popular things associated with the Nineties

Becky Simms, CEO at Reflect Digital, commented: ‘Our latest game was inspired by a lockdown induced clearout of one of our creative team’s lofts.

‘In the loft, they found a box of Nineties memorabilia and it started their creative mind whirring that wouldn’t it be great to test the nation’s knowledge of the Nineties, an era that many hold so dear.

‘So that was it, challenge set, we wanted to create the hardest Nineties quiz out there, to help entertain the UK whilst staying indoors for the good of the country.’ 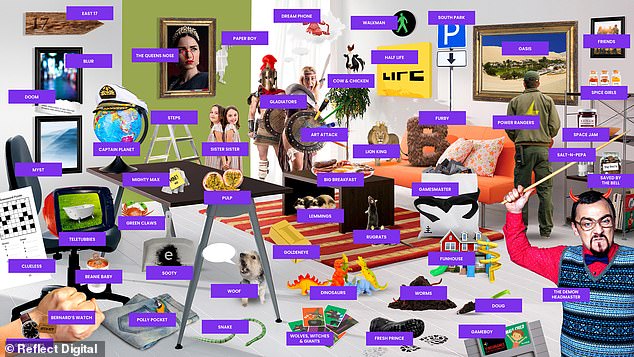 For those struggling to name all 50, you can find the answers labelled in the graphic above (pictured)

And the most eagle-eyed would also have spotted: The Lion King, Gamesmaster, Salt-N-Pepa, Saved by the Bell, Clueless, Teletubbies, Green Claws, Beanie Baby.

Another tough all-singing, all-dancing new brainteaser has left even the most eagle-eyed of puzzlers baffled.

The graphic, created by Harlequin Floors ahead of International Dance Day on 29 April, challenges people across the UK to find two stray ballet shoes hidden within the group of dancers.

But with hundreds of pink and black tutus in the mix, it may prove more difficult than you first think.

The current record stands at an impressive 15 seconds to complete – but how will you fare when you put your searching powers to the test? 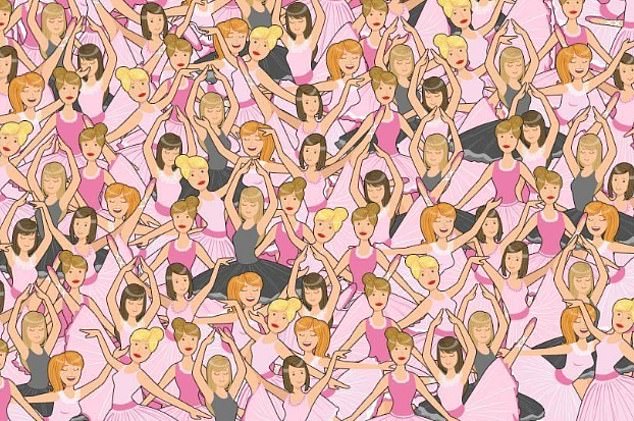 A brainteaser (pictured), created by Harlequin Floors, challenges people across the UK to find two stray ballet shoes hidden within the group of dancers

Harlequin Floors designed the game to mark the anniversary of the birth of Jean-Georges Noverre – the creator of modern ballet.

Melissa Chapman, Group Marketing Manager at Harlequin Floors, commented: ‘What better way to celebrate International Dance Day and the launch of our expanded home studio equipment than by having a go at our brainteaser!

‘With the average time set at 15 seconds to complete the game we’re looking forward to seeing the record being beaten.

And if you’re struggling to find the two answers, then scroll down to find them circled in red below. 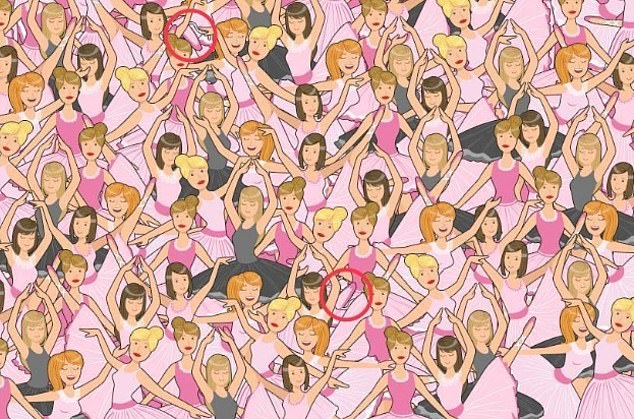 If you’re struggling to find the answers, they can be seen above, circled in red (pictured)

Another infuriating brainteaser challenges you to find the halloumi among a table of tasty treats.

The scene shows a delicious spread of BBQ classics including sausages, kebabs and burgers – as well as a single slice of halloumi.

The puzzle, released by British retirement homes Audley Villages, will help transport some players to brighter BBQ days in the sunshine. 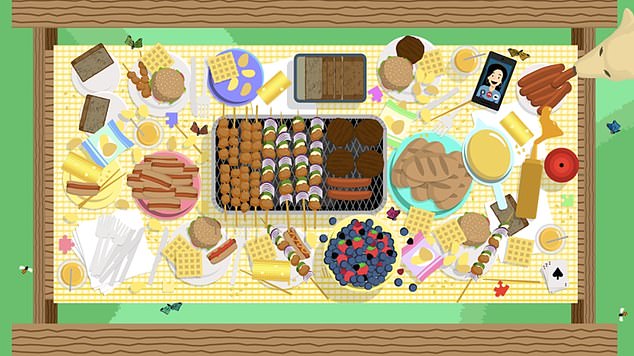 The scene shows a delicious spread of BBQ classics including sausages, kebabs and burgers – as well as a single slice of halloumi. Can you find the cheese?

Audley Villages created the puzzle after conducting research into the best ways to keep your mind active during quarantine.

One of the recommended activities for boosting brain functions is painting and playing music is one of the simplest ways to boost brain health.

‘It draws on many different high-level brain functions at the same time, which strengthens connections between different regions of the brain.’ 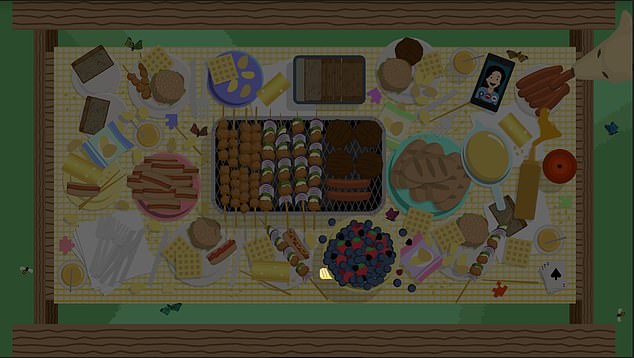 Even the most eagle-eyed players will struggle to spot the cheese tucked away in the scene. The answer shows how it can just be seen peeking out from underneath a plate of berries

Elsewhere, as explorers are forced to halt their travel plans because of the ongoing global health pandemic, a tricky new brainteaser is sparking nostalgia for sunny beach days.

Created by British airline Jet2, players are challenged to spot skis hiding among a sandy shoreline filled with red and white deckchairs.

According to the illustrators, the tricky puzzle has stumped many and no one has been able to find the hidden items in less than 28 seconds.

As people eagerly anticipate their next escape – could you be the fastest to solve the holiday themed brainteaser? 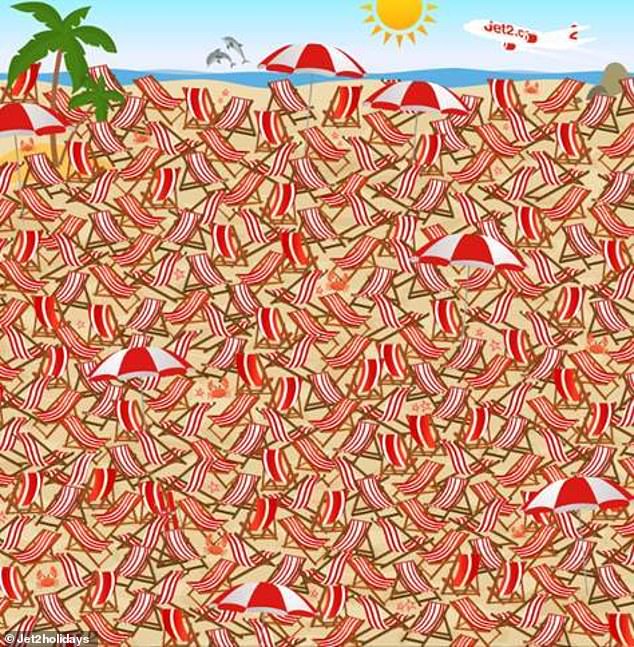 Jet2 has stumped the internet with a tricky brainteaser (pictured), challenging players to spot the skis hidden among the deckchairs

While most people are familiar with skis, trying to find the essential snow slope accessories can be a battle – with similar looking items surrounding them.

If you’re struggling to find the hidden skis, try looking towards the crowd of deckchairs in the bottom left of the graphic.

Jet2 who specialise in low-cost travel, designed the brainteaser to keep people entertained, while awaiting their next getaway.

The 3rd largest registered airline in the UK, Jet2 operates to top ski destinations giving direct access to over 600 of the best ski resorts in Europe. 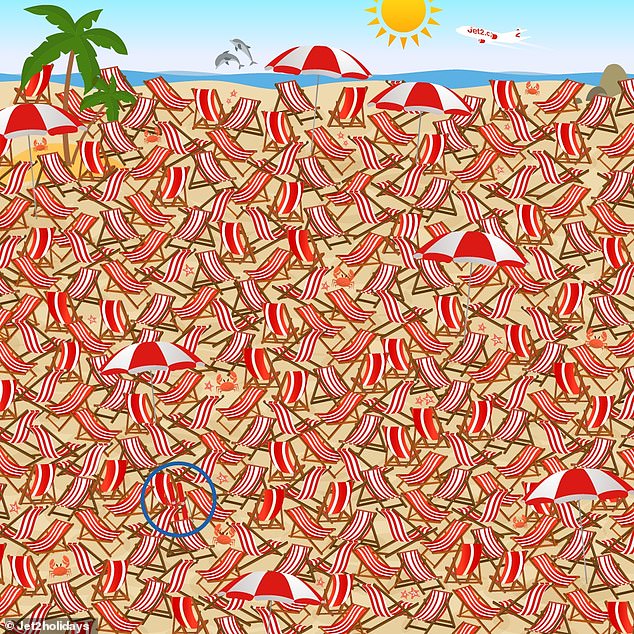 Another tricky puzzle recently baffling players challenges you to work out which one of these three cats will reach the bowl of food first – and it’s surprisingly tricky to solve.

The illustrators behind the maze claim the current record for solving it stands at 18 seconds. So, can you solve it quicker? 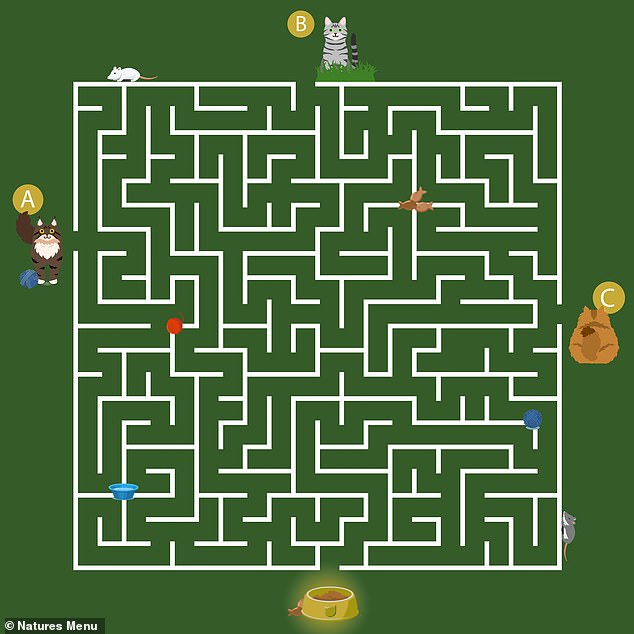 A new brainteaser, created by Natures Menu, challenges the nation to solve which cat will solve the maze and get to the food (pictured)

While many pet owners will be self-isolating with greedy cats, the virtual mystery takes deep concentration to solve which of these moggies will be the first to eat.

If you’re struggling to solve the puzzle, consider which of the animals has the straightest path to the food.

Natures Menu, who specialise in raw and natural pet food, created the graphic to mark National Pet Month this April.

And if you’re struggling to find the answer, then scroll down to see the path marked out in red. 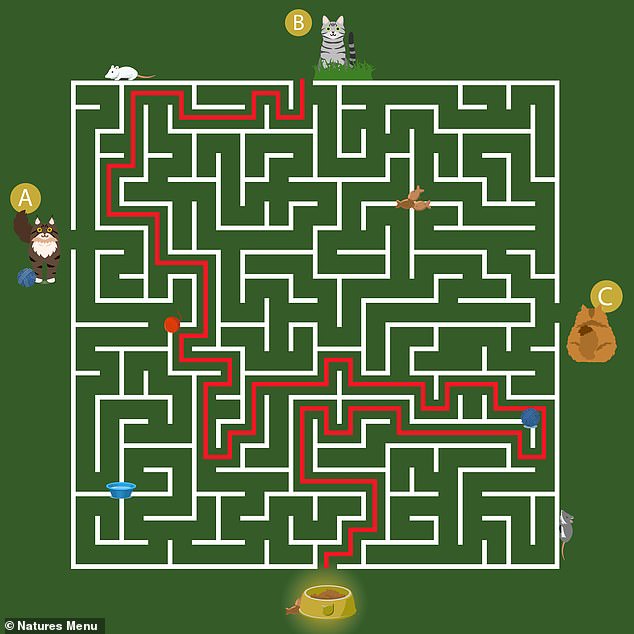 Cat B is able to get to food quickest, taking very few twists and turns to escape the labyrinth

Another bafflling brainteaser has left the internet stumped – despite seeming easy to solve at first glance.

The busy graphic, created by illustrator Gergely Dudás from Hungary, challenges the nation to spot a hidden bumblebee among a field of flowers and cartoon animals.

Since being shared on Facebook, the viral puzzle has seen many claim they’ve spent more than 30 seconds trying to find the well-hidden insect.

But while hundreds struggle to solve the brainteaser, could you be the one to set a new record? 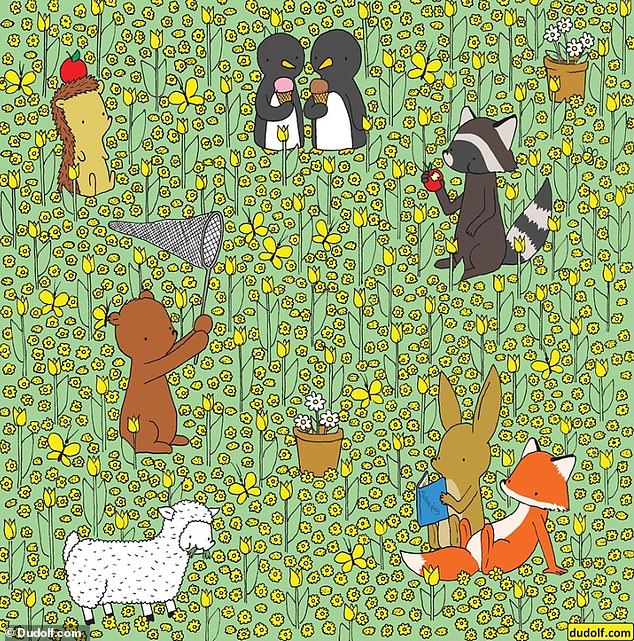 A new brainteaser, created by illustrator Gergely Dudás from Hungary, is challenging the nation to spot a bee hiding among a field of flowers and animals (pictured)

While some of us are wary of getting too close to bees in fear of being stung, trying to find the insect in this busy puzzle requires you to look very closely.

If you’re still struggling to spot the bumblebee, try looking at the flowers closest to the raccoon eating an apple.

Gergely, who is perhaps best known as Dudolf, boasts over 152,000 likes on Facebook for his illustrations and quirky brainteasers.

His latest hiding bee puzzle has already been shared almost 1,000 times on the social media platform. 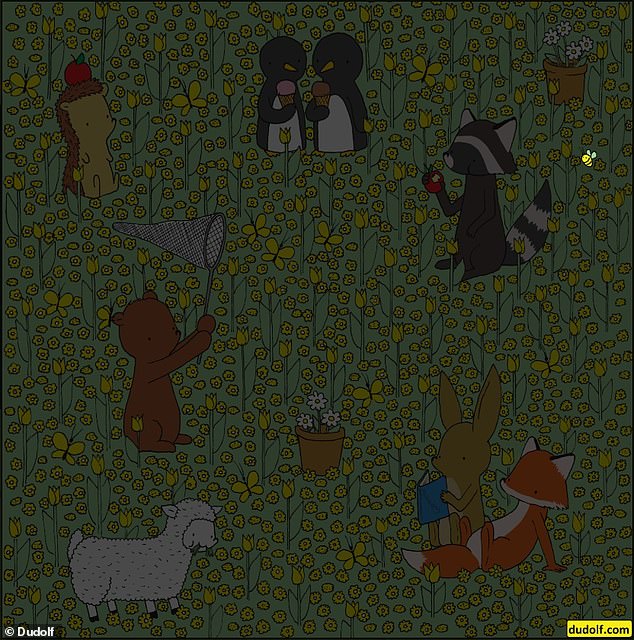