The militant construction union has been fined $85,000 for delaying work on Melbourne’s Metro Tunnel project in part because a first aid bed was too high, but the judge also lashed the government regulator for treating the case like a “blood sport”.

Work stopped on the City Square section of the $11 billion project for several hours in July 2019 after a union representative told his co-workers to down tools because of problems with the first aid room, including the height of a bed, a lack of ramp access and poor lighting. 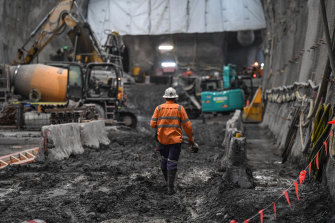 Work stopped on a section of the Metro Tunnel project for several hours because of the union action.Credit:Joe Armao

Health and safety laws only allow employees to stop work when there is an “imminent” risk to health and safety, which was not the case, making the industrial action unlawful and prompting the Australian Building and Construction Commission to launch legal action.

It initially pursued the Construction, Forestry, Maritime, Mining and Energy Union, its site representative, Steven Parker and 11 of his colleagues.

After mediation, the commission dropped the claims against the 11 workers and agreed that Mr Parker had raised the safety concerns but said he had done so as a “pretext” for some other objective, justifying a very high fine against the union.

The CFMMEU, Justice Duncan Kerr said, had a history of misusing safety concerns to advance its industrial objectives like a “boy who cried wolf”. But Justice Kerr, who was a long-serving Labor MP and Minister for Justice in the Keating government before being appointed to the court, said the union was attempting to change.

He said on the day in question there was no evidence that Mr Parker had stopped work because of any “nefarious purpose”.

Nonetheless, “like a battleship in full steam”, the ABCC continued to press its case. “The court should not have been invited to impose penalties on that premise,” Justice Kerr said.

In reality, the judge found, Mr Parker was concerned about a serious safety risk and was frustrated because the contractors on site had previously promised to fix the first aid room. While the problems were not imminent, Justice Kerr said, they could have prevented a person being carried on a stretcher into the room.

Another claim from the commission, which had suggested that there was another first aid room on the site, “was bordering on the improper”, Justice Kerr said.

The commission, which Coalition governments have established twice to rein in the union and Labor has abolished once, had wasted court time, Justice Kerr said.

“The court accepts that the ABCC and the union are old foes and that litigation as between them will always be hard fought but the court is entitled to expect that proceedings will not be conducted as a blood sport where issues not genuinely in contention are not acknowledged unless strictly proven.”

Commissioner Stephen McBurney said there was no excuse for work to stop on the project because the safety concerns did not pose any imminent risk to workers.

“The safety of workers on construction sites remains the paramount priority in the industry but
concerns about safety should never be used as an excuse to engage in unlawful industrial action,” Mr McBurney said. “The ABCC will continue to bring matters before the Court where it finds concerns about workplace safety have been abused by building industry participants.”

The union’s national construction secretary, Dave Noonan, said other federal court judges should take a similar “balanced view” of the ABCC, as Justice Kerr had.

“The ABCC seems to believe that it has got a duty to try and attack the union rather than act as a balanced regulator,” Mr Noonan said.

Mr Parker was fined $5000 but that will be wiped away if he does not breach building laws for the next three years. The union will have to pay $10,000 of the regulator’s legal costs, but the commission will have to pay the union’s costs for one of an abandoned hearing in the case.