Chadwick Boseman Snubbed At Oscars In Final Film Role & Fans Are Stunned: He Was ‘Robbed’

In the biggest shock at the 2021 Oscars, Chadwick Boseman lost the Best Actor award to Anthony Hopkins, and the upset left fans feeling confused, outraged, and completely stunned!

All eyes were tuned into the 93rd Academy Awards on Sunday – not only to see how the Apr. 25 event would look like in a post-COVID world – but to see if Chadwick Boseman would posthumously win the award for Best Actor. The actor, who passed away in August 2020 at age 43 after a four-year battle with colon cancer, collected the Screen Actors Guild Award and Golden Globe for his role in Ma Rainey’s Black Bottom, and on Sunday, the streak came to an end. After presenter Joaquin Phoenix read out the name of the nominees, everyone awaited to hear Chadwick announced as the winner…only for the Joker star to say that Anthony Hopkins had won. Joaquin then accepted the award on Anthony’s behalf, and the show then ended.

The sudden build-up to an expected Chadwick celebration, ending in that left jaws on the floor. “Holy shit Anthony Hopkins beating the late Chadwick Boseman AND Riz Ahmed AND Steven Yeun for Best Actor is just some go home with your heart in your belly stuff. What is even happening,” tweeted one fan. “NO ACADEMY AWARD FOR CHADWICK BOSEMAN? I’M PISSED.” “Yeah, the “let’s put Best Actor last so, obviously, we can celebrate the life of Chadwick Boseman” really backfired,” tweeted another. Most fans were just shocked, tweeting that Chadwick was “snubbed” and “robbed.”

Going into the Oscars, Chadwick was the favorite to win the award. Yes, he faced some stiff competition: Anthony Hopkins (The Father), Steven Yeun (Minari), Riz Ahmed (The Sound of Metal), and Gary Oldman (Mank) were all nominated. But Chadwick’s role in Ma Rainey was celebrated by the critics (“It’s no stretch to say his last performance may be his finest,” wrote Odie Henderson for RogertEbert.com.) Couple that dynamic performance with this being the last time the Academy could celebrate his legacy, and many banked on Chadwick to take home the award this night. So, when Anthony Hopkins’ name was read — he didn’t even record a message accepting the award, — the sudden, jarring end of a long night left a bad taste in the mouths of some viewers.

So ends an awards show season that seemed to be a celebration of the late Boseman’s life. “He would thank God,” his widow, Taylor Simone Ledward, said through tears after Chadwick won the Golden Globe — his first ever — for Best Actor in a dramatic motion picture. “He would thank his parents. He would thank his ancestors for their guidance and their sacrifices. He would thank his incredible team. … He would say something beautiful, something inspiring, something that would amplify that little voice inside of all of us that tells you, ‘You can,’ that tells you to keep going, that calls you back to what you are meant to be doing at this moment in history. … And I don’t have his words, but we have to take all the moments to celebrate those we love.” 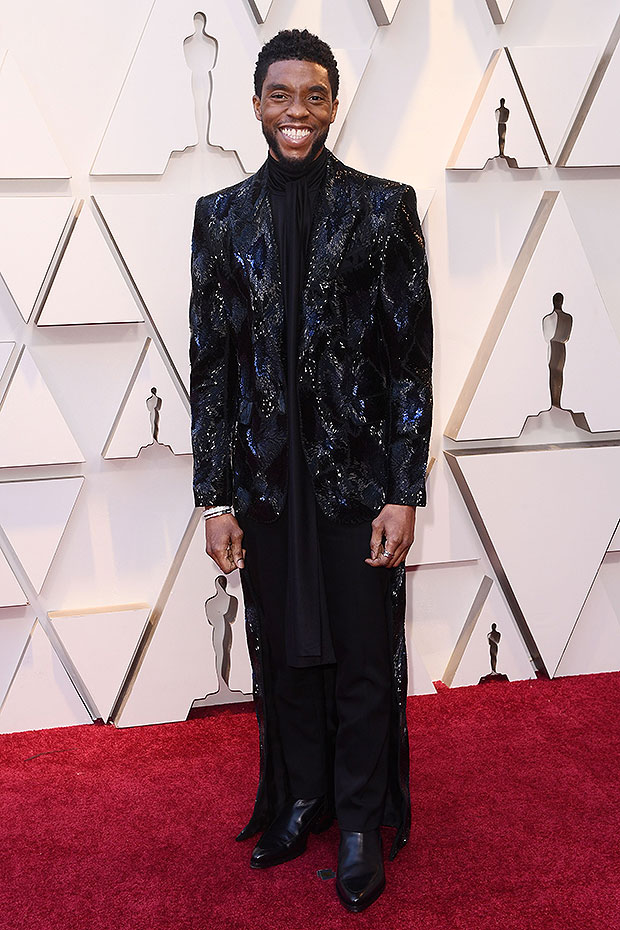 When Chadwick was honored with the SAG award for Outstanding Performance by Male Actor in a Leading Role, Ledward again accepted the award on her late husband’s behalf. After showering the film’s cast and grew with some heartfelt gratitude, she shared a bit of advice from her husband. “If you see the world unbalanced, be a crusader that pushes heavily on the seesaw of the mind,” she said. “That’s a quote by Chadwick Boseman. Thank you, Screen Actors. Thank you, Chad. Thank you.”

Ma Rainey’s Black Bottom was released in November 2020, three months after Chadwick passed away from cancer. It was the last of the six movies he made while battling the disease, a struggle very few knew about. The Black Panther star was quite protective of his private life and concealed his health struggle from the public. “It’s no one’s business, really,” he said in 2018. “When you talk about that, you become a whole different type of celebrity. Your personal life bleeds into your professional life. I’m an actor, and you know me from who I play. You get a sense of who I am, but you don’t know everything.”