‘I can’t stop staring at it’: Chef shares her incredible 27 LAYER crepe cake – and says the stunning dessert was the most ‘tedious’ she’s made

A chef has revealed her recipe for an intricate crepe layer cake – but warns it is the most tedious cake she has ever made.

The mesmerising strawberry ombre crepe cake has 27 layers, starting out as a deep pink at the bottom and slowly fading to white at the top.

The dessert ‘seriously tested’ the chef’s patience as it takes a long time to perfectly create each layer. 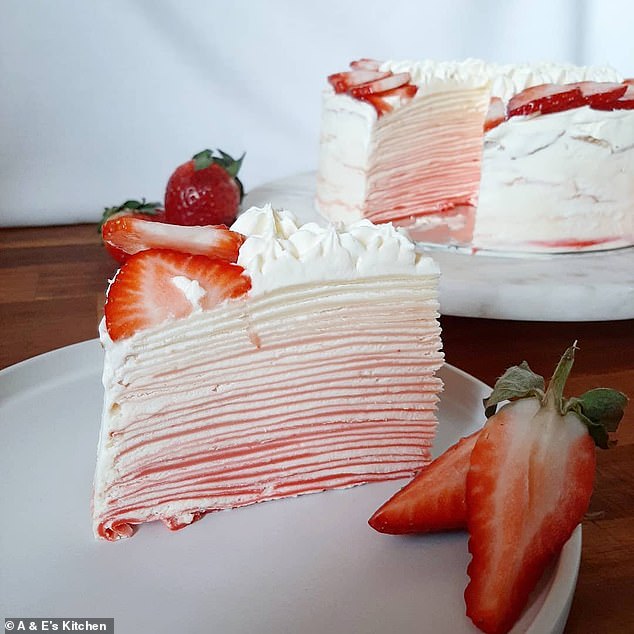 ‘Cutting into it and seeing all those layers was so satisfying,’ the chef said.

The photo, recipe and video of the cake was uploaded by a.e.kitchen – and  was very popular with home cooks.

But the moment it was cut open it’s true beauty shone through.

There are two key parts to this recipe, the crepes and the frosting which helps everything stick together.

The recipe video shows the chef mixing the ingredients for the crepes before starting on the icing. 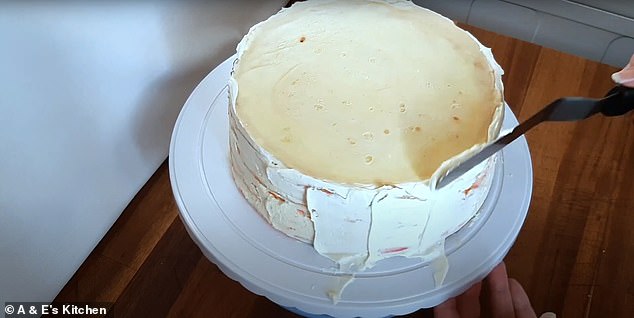 They suggest to do three crapes of each colour for an ombre effect, and started with white before slowly adding a drop of food colouring to the bowl of batter.

After making the crepes and the frosting the pain-staking assembly begins.

The chef starts by laying the darkest crepe down on a cake board first.

Then she weighs out 40g of the cream cheese frosting to insure there is an even amount for each layer.

It is important to go all the way to the edge with the frosting so the cake doesn’t get a ‘dome’ appearance.

The cake looks delicious and impressed when it was shared online

HOW TO MAKE THE CREPE CAKE?

To make the eggs pour the milk, eggs and vanilla essence into a jug or bowl and whisk until it is combined.

In  a separate bowl add the castor sugar and plain flour – then stir to combine.

Slowly combine the wet ingredients, whisking as you go.

Pass the mixture through a sieve to get rid of any small lumps.

Then cover in plastic wrap and put in the fridge for one hour.

After this whisk lightly to loosen the mixture.

Grease a pan and begin cooking. Swirl the pan to get a thin crepe.

Add one drop of red food colouring after making four of each coloured crepe. This will allow the colour to build nicely.

After making the crepes you can start on the frosting.

Pour the cream into a steel bowl and whip it until it peaks.

Take another bowl and add the butter – beat with hand mixer until it is fluffy. Then add the cream cheese and beat the mixture again, until fluffy.

Use a sieve to add icing sugar and then mix until fluffy again.

Then lightly fold in the whipped cream

It is best to layer the cake on a cake board so that it can be transferred later. Start with the darkest crepes.

Add 40g of icing between each crepe, focus on getting to the edges so the cake does not dome.

Every five layers press the cake down so it remains flat.

Continue until you run out of crepes – it can be more than 27 crepes tall – just increase the recipe.

Cover with the frosting, so that the cake looks like one piece. Then top as you wish. The chef uses cream and strawberries.

The chef repeated the process and then smoothed down the cake at the centre to insure it didn’t dome.

She then continues to repeat the process until it is time to cover the whole cake in the icing.

She says it can be ‘decorated as you wish’.

She chose to decorate with cream and fresh strawberries.

The video was a huge hit – with people expressing their excitement to try it out themselves.

‘I’m so gonna try to make this my future project! Thank you for inspiring me,’ one person said.

‘I would be curious to try this using my crepe maker,’ said another. 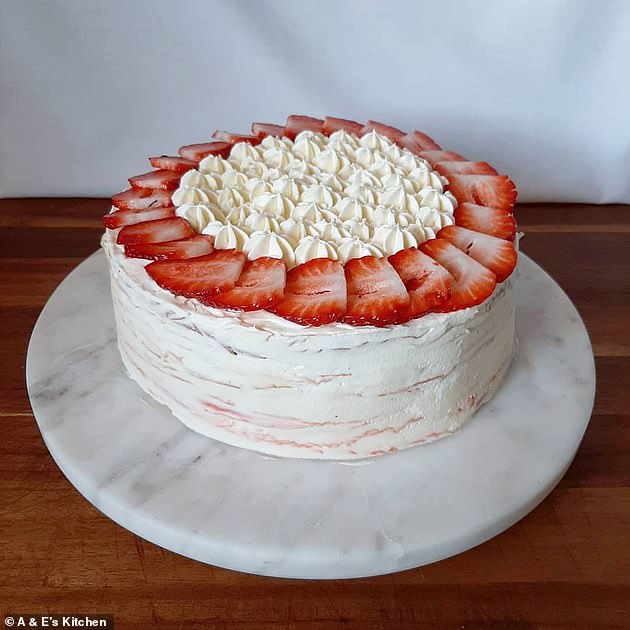