Four out of five childcare centres are on the brink of collapse and the Out of School Hours care industry fears it may never recover from the COVID-19 crisis, with both sectors being told they must wait for financial relief until the government orders them to close.

The Early Learning and Care Council of Australia said mass closures would begin early next week, as parents take their children out of centres and refuse to pay fees as they lose their own jobs. 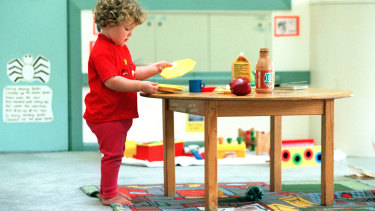 “More than 80 per cent of Australia’s early learning and care services are facing closure in the very near future and Australia wide we are looking at the potential of 150,000 job losses across the sector," the council's chief executive Elizabeth Death said.

“Many of the hundreds of services that will close will not reopen and there is the potential of a critical shortfall in services and places for the 845,000 children who are currently enrolled in Australia wide, not to mention the job losses."

The Herald understands some centres are trading insolvent. Centres cannot get the child care subsidy unless parents pay their half of the fees, but many are no longer in a position to pay. The situation is causing conflict between parents and centres.

The chief executive of Out Of School Hours Care (OOSH), Pauline O'Kane, also said occupancies in that sector were now below 10 per cent, but its providers were required to remain open until a government order that schools close.

"Viability concerns are major with staff being stood down without pay," Ms O'Kane said. "We already have a huge workforce issue and we are now wondering if the sector will ever recover. We so need action now or else the support will be too late."

Federal Education Minister Dan Tehan on Thursday put out a statement saying the government was aware of the challenges facing the sector, and grants were available to those facing hardship.
"I will have more to say on this in the coming days," he said.