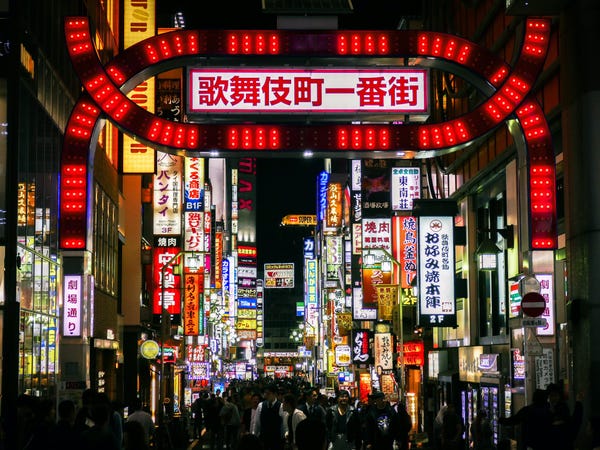 China is home to knockoff cities, from Paris to Hallstatt. But its newest replica isn't a city — it's a street that's meant to resemble one that you might find in Japan.

The street in Foshan, Guangdong province, is described by local news outlet Togetter as a "Japanese-style shopping mall. The South China Morning Post (SCMP) refers to it as an "ichibangai," which are "large shopping streets in Japan," according to the publication.

Though the area, called Ichiban Street, is not officially open yet, the SCMP reports that locals started visiting around September 19, sharing their experiences on social media.

One recent visitor said on Twitter that most of the stores weren't open yet, and describes the area as having had a "soft open."

According to SCMP, the shopping area is around 330 feet long, and meant "to resemble famous commercial streets in Japan." Sora News 24 describes it "as a mix of Kabukicho [in Tokyo], Hong Kong, and Namba in Osaka." Kabukicho is Tokyo's brightly colored red-light district, and Namba in Osaka is a similar neon-lighted shopping and entertainment district.

According to SCMP, even the traffic lights and street signs are modeled after those used in Japan. There's also a fake bus stop on the premises said to be a nod to the 87 route from Shibuya Station to Tamachi Station in Tokyo, per Sora News 24.

SCMP also reports that "the neon signs refer to Japanese anime characters such as Astro Boy, Inuyasha and Sailor Moon, which are popular in China."

The area, which houses shops, bars, restaurants, and cafés, is already popular, as SCMP reports that ground-floor units in the area were all rented out in less than two months and that prices for those on the second and third floors of buildings are "soaring" in response.

China is famous for what has been dubbed "duplitecture," in which it re-creates famous landmarks from around the world.

One of its most ambitious projects is the "One City, Nine Towns" area outside of Shanghai, comprised of seven neighborhoods, each designed to mimic a different European country from the UK to the Netherlands. And that's just one example of many.

However, the BBC reports that in May 2020 the Chinese government issued a statement aiming to clamp down on foreign imitations by forbidding "plagiarizing, imitating, and copycatting" designs, in order to promote local architecture.