Nature reserves across the country are facing rising temperatures, falling river levels and a worsening fire risk in the face of climate change, a new report has said.

It warns that species and habitats are at increasing risk from a range of hazards that are expected to worsen, like extreme heat, flooding and wildfires.

The Wildlife Trusts, a federation of 46 conservation charities, looked into how the climate crisis is affecting and will affect nearly 400 square miles of nature sites.

They say that restoring nature at scale is the solution to help wildlife cope, and society has to be prepared to see wild places change in order to survive.

This could include releasing beavers to help manage water, and restoring grass and peatlands. 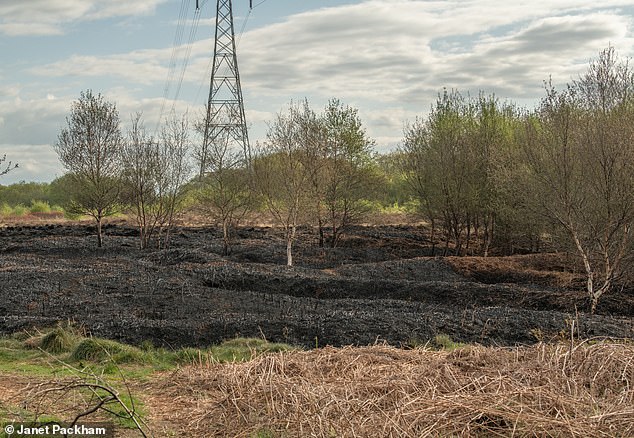 Wildfire damage at Lancashire Wildlife Trust. Half of The Wildlife Trusts’ nature reserves are predicted to experience 30 days or more of very high wildfire risk per year, compared with only 9 per cent between 1981 and 2010, the report said 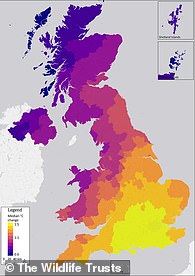 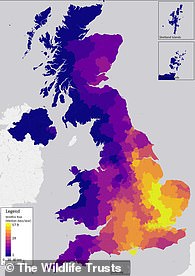 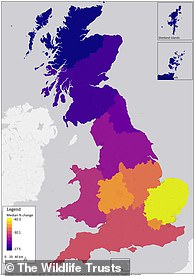 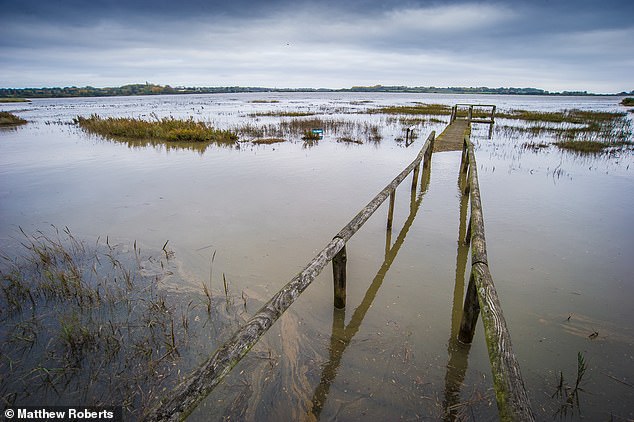 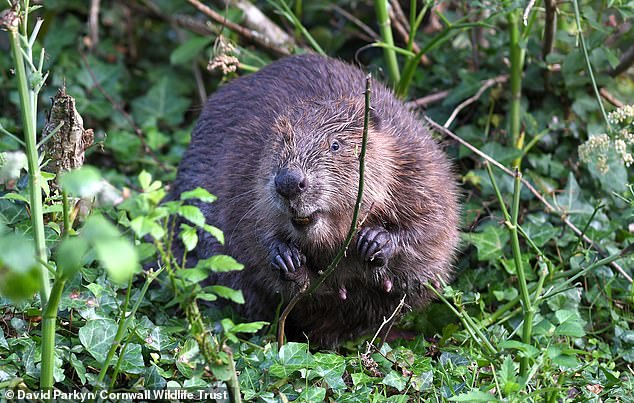 Restorative nature projects that could ease the effects of the climate crisis in nature reserves could include releasing beavers to help manage water, and restoring grass and peatlands

A new report from The Wildlife Trusts predicts that, by the 2050s and under a future warming trajectory that reaches 5.4°F (3°C) warming by 2100:

Kathryn Brown, director of climate change and evidence for The Wildlife Trusts, said: ‘Climate change is contributing more and more to nature’s decline, with devastating consequences for people and wildlife.

‘We are already stepping up our efforts to restore habitats so that they benefit wildlife and are better able to store carbon.

‘Our report also shows the range of actions we are taking to help nature adapt to climate change and what’s needed in the future – from further rewetting of peatlands to backing community-led rewilding projects.

The effects of extreme weather are already being felt in many of The Wildlife Trusts’ reserves.

Wildfires are destroying rare habitats, flooding is increasing river pollution and droughts are drying out chalk streams and peat bogs.

The ‘Changing Climate’ report, released today, looks at what will happen to nature sites cared for by the individual wildlife charities by the 2050s.

On current policies and climate action, global temperature rise is on track for 5.4°F (3°C) of warming compared with pre-industrial levels.

It found that 94 per cent of the 2,700 nature reserves assessed will see maximum summer temperatures increase by more than 1.8°F (1°C).

In the south of England the situation is more extreme, with seven per cent of the sites that are expected to see maximum temperatures more than 2.7°F (1.5°C) hotter all found in that region.

Over half of nature sites will see nearby river levels drop by more than 30 per cent from the 1981 to 2021 baseline in times of low water flows.

And half will experience 30 days or more of very high wildfire risk per year, compared with only 9 per cent between 1981 and 2010, the report said.

The Wildlife Trusts are also expecting an increase in flood risk and a worsening exposure to extreme heat for staff in offices, working outside and working from home. 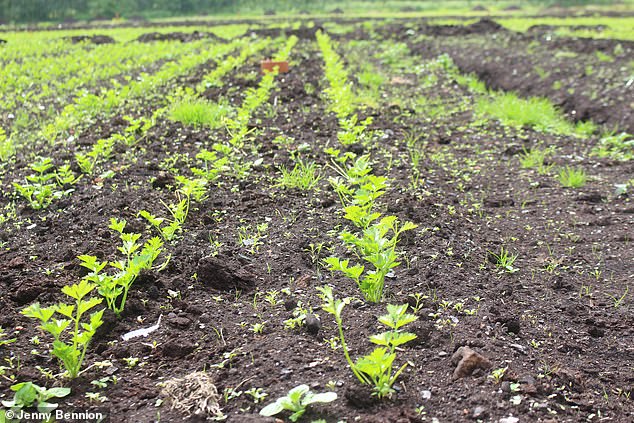 Wet farming on peat soils helps them cope with hotter, drier conditions, and is one of the restorative projects supported by The Wildlife Trusts 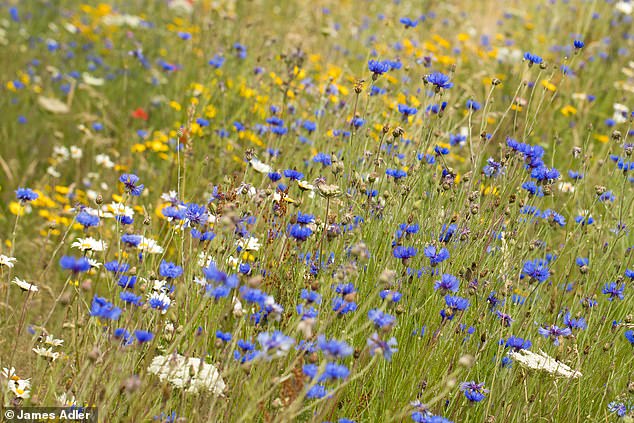 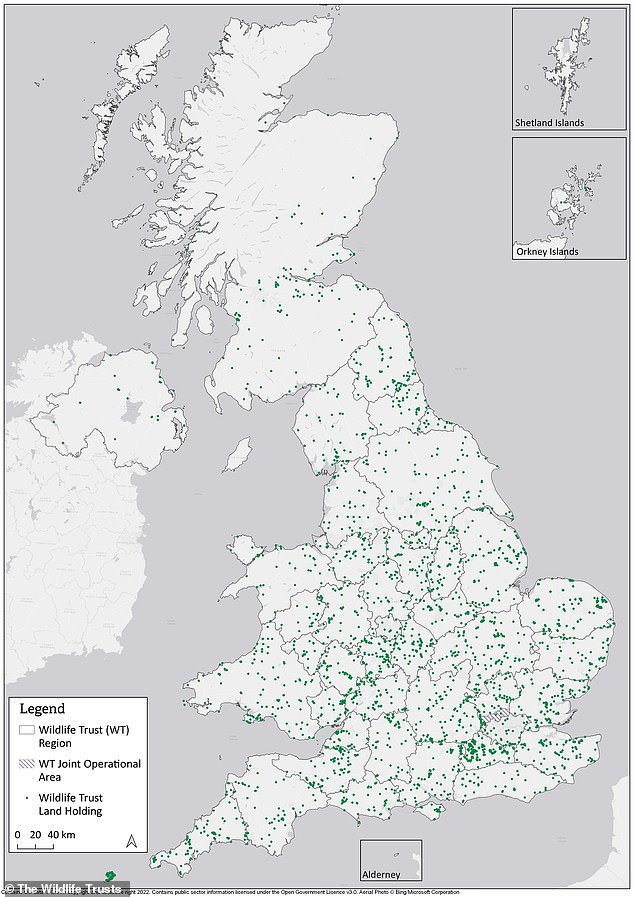 Map showing The Wildlife Trusts’ land holding, many of which were assessed for the ‘Changing Climate’ report, released today. The charities are collectively the UK’s sixth largest landowner

The charities say more work is needed from governments, business and landowners to help wildlife adapt to climate change in the UK.

The nation is already described as one of the most nature-depleted countries in the world.

Ms Brown added: ‘The projected impact of climate change on our nature reserves is just the tip of the iceberg.

‘We need people to join us in creating a new national vision for our landscapes because we can no longer focus only on restoring nature to a historical state; change is inevitable.’

She said a ‘concerted effort’ is required to make more space for nature, help natural systems function properly, and create habitats for wildlife.

This could include supporting projects that help restore peatland, making it more resilient to heat, drought and fire.

The release of beavers can also help manage water, and restoring grassland is important so insects can move through the landscape.

England’s two million ancient trees should be given heritage status old buildings because they are ‘cathedrals of the natural world’, conservationists say

Ancient trees in England should have the same protection status as old buildings, conservationists say, after research suggested there could be millions of unrecorded ‘cathedrals of the natural world’.

Experts from the University of Nottingham estimated that there could be between 1.7 and 2.1 million ancient trees across the country — ten times as many as currently on official records.

Three quarters of England’s ancient trees are found in places like fields, churchyards, housing estates, parks or on roadsides, rather than within protected wildlife sites.

The Woodland Trust is now rallying for these trees to receive the same heritage status as some of the nation’s favourite buildings, including Buckingham Palace and the Old Bailey.