Released yesterday to mark the 50th Earth Day, it said climate change has “gathered pace, reaching a crescendo in the past five years, which were the hottest on record”. It added: “Since the 1980s, each decade has been warmer than the previous one.” The report was released as an EU study said 11 of Europe’s 12 warmest years have occurred since 2000. The Copernicus Climate Change Service said last year was Europe’s warmest year on record. Earlier this week the Met Office backed a series of studies which forecast that the Arctic will be ice-free in summer by 2050.

The average global temperature is currently 1.1C warmer than before the mid-19th century Industrial Revolution led to wholesale burning of fossil fuels.

The WMO said levels of the main greenhouse gas, carbon dioxide, are 26 per cent higher than on the first Earth Day in 1970. It predicted a new global mean temperature record in the next five years.

The WMO said that when the world emerges from lockdown, government recovery packages need to “help the economy grow back greener”.

“Added to this, all seasons were warmer than average with summer being the fourth warmest since at least 1979.” 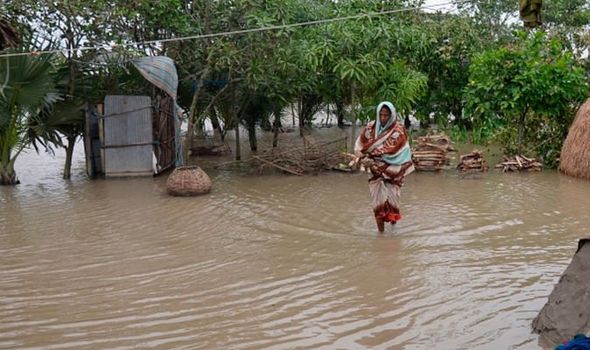 Last year’s highlights include one of the wettest Novembers on record with up to four times normal levels of rain in Western and Southern Europe.

Scientists joined the called for governments around the world to show the same determination to tackle climate change as they have shown with coronavirus.

Dr Anna Jones, a climate scientist at British Antarctic Survey, said: “For things to improve, we need massive reductions in greenhouse gas emissions – there is no other way.”

Professor Hannah Cloke, a natural hazards researcher at the University of Reading, described the rate of warming as “worryingly fast”.

Professor Dave Reay, chair in carbon management at Edinburgh University, said: “Climate change has not gone away – it remains the greatest threat multiplier on Earth – but if our leaders can show one ounce of the courage currently being shown by our health workers then Earth Day can still become one of celebration rather than mourning.”

Climate change can seem a distant worry as we look out on a beautiful sunny spring day.

But it brings increasingly frequent and intense floods and droughts, plus more dangerous hurricanes and typhoons.

I’ve seen the impact of climate change – rapidly retreating glaciers in Alaska and islands lost to sea level rise in the South Pacific. For the locals climate change is far from a theory.

Around the world governments have failed to show the same determination to tame climate change that they have displayed against coronavirus.

Yet climate change is a killer whose death toll will dwarf that from the deadly bug.

At the last count the confirmed global pandemic death toll was nearly 180,000. In a year we should have a vaccine.

There’s no vaccine against climate change. What is needed is concerted action by governments, businesses and individuals worldwide.

But here coronavirus may offer a signpost. The lockdown has cut emissions. This is temporary because hopefully economies will come back to life.

Some lockdown changes could continue – working from home for those who can, commuting less, video conferences instead of flying for meetings. There is a way. We just have to follow it.