Even steady climate change could cause ‘abrupt shifts’ in the amount of vegetation growing in Britain, scientists warn

Climate change will cause an overall increase in the amount of vegetation growing in Britain, a new research paper predicts.

Depending on the scenario, up to 1,200 grids of British land – each just under a mile squared – will show ‘abrupt shifts’ in vegetation.

In their simulations, increases in vegetation were observed ‘pretty much everywhere’ in Britain as carbon dioxide (CO2) levels rose in simulations of the end of the century.

Most changes were increases, caused by factors such as warmer, wetter conditions and more CO2 in the atmosphere fertilising plant growth.

Elsewhere, warmer conditions could cause soil to dry out, reducing plant productivity and decreasing vegetation rapidly, however. 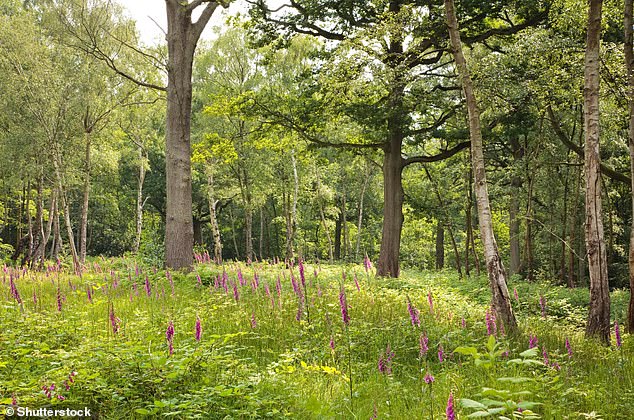 Warmer, wetter weather is likely to cause an overall increase in vegetation in temperate places like Britain, scientists believe

While the more likely result – an increase in vegetation – may not be considered a negative, the fact that big ecological changes could take place is itself a concerning finding.

‘The general expected trend towards warmer, wetter weather is likely to cause an overall increase in vegetation in temperate places like Great Britain,’ said Dr Chris Boulton of the Global Systems Institute at the University of Exeter.

‘However, we wanted to find out whether even “smooth” climate change might lead to abrupt shifts in vegetation.

‘A lot of research has focused on “tipping points” in large systems like rainforests and oceans.

‘Our study doesn’t predict abrupt shifts across the whole of Great Britain – 0.5-1.5 per cent of the land area depending on the climate scenario – but it shows numerous shifts can happen on a localised level.’ 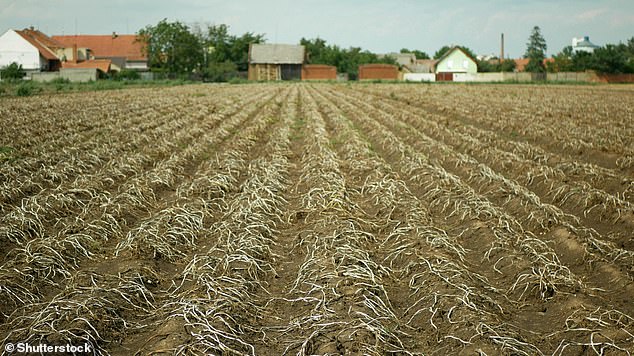 Warmer conditions could cause soil to dry out, reducing plant productivity and decreasing vegetation rapidly

The research team said there is a widespread expectation that future climate change, caused by the emission of greenhouse gases by human activity, poses a threat to species and could cause abrupt changes in some ecosystems.

Climate change may already have contributed to abrupt shifts in land-based ecosystems, notably widespread forest dieback – the progressive death of trees and shrubs starting at the tips – and increased wildfires preventing forest regeneration.

Climate change models have generally predicted abrupt climate changes in the savanna around the equator and tundra regions at the poles.

This is because woody plants store carbon, provide fuel for fires and influence how much of the sun’s heat is reflected back into space.

However, the potential for large-scale shifts in shifts in temperate ecosystems, such as Britain, is less recognised, they said. 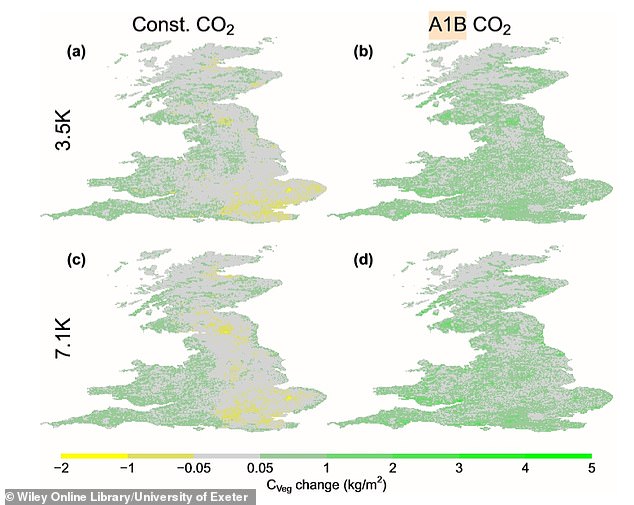 To learn more, the University of Exeter team studied the country in high resolution, using models to examine the local impacts of ‘smooth’ climate change.

‘This is to differentiate it from the abrupt changes we observe in vegetation as a response to these smooth changes. ‘

The team found that even smooth climate change could lead to sudden changes in the amount of vegetation in some places – including around London.

Depending on the scenario, between 374 and 1,144 grid cells, each 0.9 miles squared (1.5 km squared), comprising between 0.5 per cent to 1.5 per cent of Britain’s land area, show abrupt shifts in vegetation.

Regardless of where they are, the fact they happen in the first place is the important findings, as another model could show shifts occurring in other places.

‘We didn’t expect to see hundreds of localised abrupt shifts in the projections,’ said Professor Tim Lenton, director of the Global Systems Institute.

‘Up to now, climate-driven abrupt shifts in vegetation have been rare in Great Britain.

‘Our results should not be taken as specific predictions of where abrupt ecosystem change will happen.

‘But they serve to illustrate that it could happen across Great Britain in a changing climate.’

The team also found early warning statistical indicators of the abrupt shifts, which shows the potential for being able to predict them in the real world, according to Dr Boulton.

In their study, the team didn’t single out specific types of vegetation, although the shifts were detected in woodlands and grasslands.

Dr Boulton said that while there aren’t downsides to more vegetation, the main concern is ‘the climate under which these changes occur’.

‘As for having more vegetation it will store more carbon from the atmosphere – but not enough to counteract the increases in the first place,’ he said.

‘It may suggest that arable farming would benefit as vegetation grows more easily.’

The study has been published in Global Change Biology.

WHAT DO EXPERTS PREDICT FOR THE FATE OF THE PLANET’S PLANTS AND ANIMALS?

Nature is in more trouble now than at any time in human history with extinction looming over one million species of plants and animals, experts say.

That’s the key finding of the United Nations’ (UN) first comprehensive report on biodiversity – the variety of plant and animal life in the world or in a particular habitat.

The report – published on May 6, 2019 – says species are being lost at a rate tens or hundreds of times faster than in the past.

Many of the worst effects can be prevented by changing the way we grow food, produce energy, deal with climate change and dispose of waste, the report said.

– Turning forests, grasslands and other areas into farms, cities and other developments. The habitat loss leaves plants and animals homeless. About three-quarters of Earth’s land, two-thirds of its oceans and 85% of crucial wetlands have been severely altered or lost, making it harder for species to survive, the report said.

– Permitting climate change from the burning of fossil fuels to make it too hot, wet or dry for some species to survive. Almost half of the world’s land mammals – not including bats – and nearly a quarter of the birds have already had their habitats hit hard by global warming.

– Polluting land and water. Every year, 300 to 400 million tons of heavy metals, solvents and toxic sludge are dumped into the world’s waters.

– Allowing invasive species to crowd out native plants and animals. The number of invasive alien species per country has risen 70 per cent since 1970, with one species of bacteria threatening nearly 400 amphibian species.