Home » Lifestyle » Coronavirus: Germany’s Bundesliga to resume behind closed doors on 16 May

Coronavirus: Germany’s Bundesliga to resume behind closed doors on 16 May 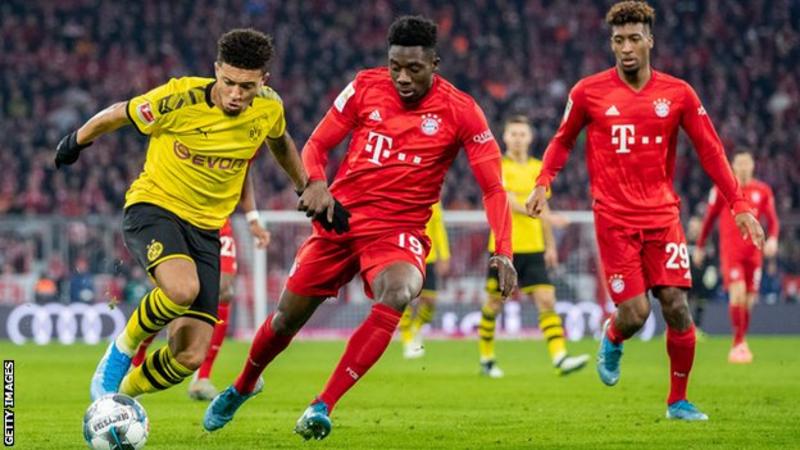 The Bundesliga will resume behind closed doors on Saturday 16 May – and is the first European league to restart following the coronavirus shutdown.

One of the games on the day of relaunch will be the derby between Schalke and Borussia Dortmund.

Champions Bayern Munich, who are four points clear at the top of the table, travel to Union Berlin on Sunday.

Most teams have nine games to play, with the final weekend of the season rescheduled for 27-28 June.

The German Football Association (DFL) said the season would resume under strict health protocols that bans fans from the stadium and requires players to have Covid-19 testing.

Around 300 people, including players, staff and officials, will be in or around the stadiums during matchdays.

The league has been suspended since 13 March; clubs returned to training in mid-April with players working out in groups.

Christian Seifert, chief executive of the German Football League (DFL), held a news conference on Thursday where he said despite the empty stands and other restrictions, “it was crucial to resume play”.

Other updates to emerge included:

On Wednesday, Chancellor Angela Merkel eased some restrictions, allowing shops to reopen with the country seeing fewer than 7,000 deaths from coronavirus.

Seifert said: “The interest [globally] is big. I see reports from across the world that we are the first major league to return. This can only happen because we have the privilege to live in one of the most modern health systems in the world.

“The matches will feel different. After the first matchday, we will all know why we prefer games with fans. But that is the framework we have to operate in and I expect the best possible sport within this framework.”

It’s going to look, sound and feel very different but there is something very exciting about finally having a start date for the resumption of one of the best leagues in world football.

The German Football League (DFL) boss Christian Seifert sounded a note of caution though at his press conference, reinforcing the fact that this is quite a fragile situation, saying “we’re playing under probation” and adding that they almost have to prove that their health and safety concepts are working on every single match day.

A local derby between fierce rivals Schalke and Borussia Dortmund is a great way to start on paper but it will also highlight how much fans will be missed at these big games and how disgruntled some of the supporters groups in Germany will be about the Bundesliga being able to continue without them.

The eyes of the Premier League, La Liga and Serie A will be firmly fixed on these early games – because if Germany can make it work, maybe Europe’s other major leagues have a stronger chance too.